Has an eBay auction cleared up a sporting etymological mystery? asks David Innes. With thanks to Chris Gavin. 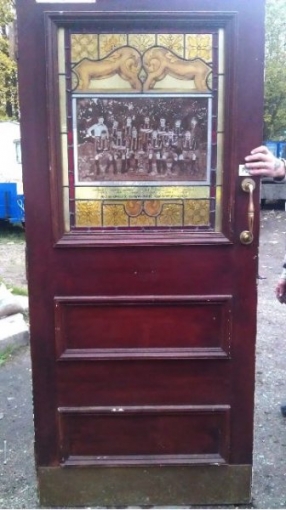 Early doors, a term flung around the airwaves with impunity by fitba pundits and players alike, has always been confusing.

Whilst there are highly intelligent and cultured individuals in the sporting media, anyone who thinks it’s a reference to Jim Morrison’s LA-based acid-fired Crawling King Snakes’ still-astonishing debut album is likely to be wrong.

But maybe the obscure meaning of this mystery cliché has become clearer in light of a news story from last week.

“I keep a regular eye on eBay for any Dons-related memorabilia. The Trust also sells merchandise via eBay, but it was a surprise to see a mahogany door from 1904, which marks a key milestone in the club’s history, offered for sale by a Wolverhampton antique dealer.

“Its glass panel is illustrated with a commemoration of the Dons’ first trophy success, when they won the Qualifying Cup a year after formation. Nobody is really sure where it originated. Maybe it was commissioned by a Black and Golds fan who owned a pub, or maybe it was from the original Pittodrie pavilion which is, sadly, long gone.

Gavin wasted no time in seeking the approval of his fellow Trustees to bid for this one-off historical memento. The Trust was unanimous in supporting an attempt to acquire the door.

By Saturday morning, the Trust’s bid had been topped, but a quick straw poll of the Trustees gathered at Pittodrie to assist with the charity collection before the Dons played Celtic encouraged Chris to keep an eye on the auction as the bid closing time of 3pm Saturday approached:

“I guessed if it was a fellow Dons fan bidding, they’d most likely be at the game, so just before the deadline I put in a higher bid, which was successful.”

The Trust is now the proud owner of a unique piece of memorabilia and Trustees are certain the individual outbid by these custodians of the club heritage will be happy the artefact has gone to a good and permanent home.

The story doesn’t end there, however…

The publicity which the sale gathered so caught the imagination of Aberdeen fans, its purchase has been funded without the Trust having to dip into its own coffers to pay for it.

The BBC’s – and Pittodrie’s – Richard Gordon, compering the Neil Simpson Benefit Dinner on Monday 19 November, related the tale to those gathered to celebrate Simmie’s career as a Dons legend. Gordon spoke warmly of the Trust’s work, not least its online information resource having been a huge benefit to him in writing Glory In Gothenburg. 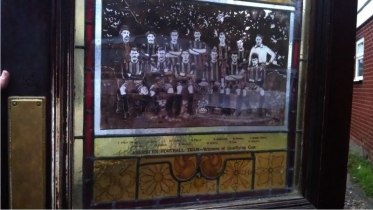 Inspired by the story (and perhaps the MC’s broad hint that donations would be very helpful), cash donations totalling £175 were given on the night. The further magnificent generosity of other benefactors Alan Moir (of Fyfe Moir & Associates), former striker Duncan Davidson on behalf of the AFC Former Players Association and a magnanimous gesture from Trustees Bob Bain and Jock Gardiner saw the entire cost of the door covered.

Now the Trust just has to work out the logistics of transporting this unique artefact safely home from the Midlands.

The result may not have gone Aberdeen’s way on Saturday, but the fans have got back a piece of their history. Those same fans dug deep, during hard times, to swell the Trust’s bank account by over £600 donated via the charity bucket collection on the day.

“A week after a terrific community day at the stadium when the fans’ giant flag was signed by over 800 supporters delighted to be part of the club, this effort underlines how good it can be when we’re all working together to achieve things.”

A trophy would be a welcome addition to maintain the returning feelgood factor, of course. As early doors as can be managed, please.