Wary of getting too optimistic following too many recent kicks in the teeth, in spite of tangible improvements, Dons fans are still coming out of rehab from the barrel-scraping lows of 2010’s onfield results. Some are on to solids now in the form of a lightly-boiled egg, but many are still just capable of sitting upright and sooking a little clear soup through a straw. A few hard core stoics have gone back to full-strength half time pie consumption, the wee soldiers. David Innes sounds an uncharacteristically optimistic note. 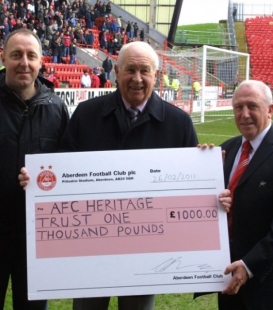 Despite the trauma Dons fans have been through and the current murmurings of discontent over the almost rubber-stamped move to Loirston, there is still a lot of love out there for the Reds.

Despite what the detractors and backbiters say, and sometimes it seems that the Grey Toon has more than its fair share of those ready to glory in the club’s problems, AFC is still a massive part of the North East community and remains, in spite of all the gloom, a cultural and sporting focal point and beacon for thousands.

The AFC Heritage Trust exists to preserve the history of the club and its links with communities in the city and hinterland and we’ve publicised it before https://aberdeenvoice.com/2010/06/down-pittodrie-way/#more-122 .

A measure of the importance with which the Trust’s work is regarded is the impressive £740 collected from fans’ donations at extremely short notice at last week’s home fixture with Hearts. It was heartening to have Dons fans drop change into a bucket once they realised the common cause for which hard cash was being solicited. Many took the opportunity to take the publicity leaflets offered by collectors to find out more about the Trust, its work and its aspirations. You can do so here http://www.afcheritage.org

Of course, a large part of the club’s community are those fortunate enough to have pulled the sacred Red or, formerly, the blessed Black and Gold over their heads before going out to do battle on behalf of the North East in over a century of mostly proud history. The club’s Former Players Association is thriving. Many members who did not spend their entire careers at Pittodrie, or who are only tiny bit part players in Aberdeen’s history, retain huge affection for the club and describe their time at Pittodrie as being among the best times of their lives.

The FPs realise the importance of the work being done by the Heritage Trust and to help the Trust’s efforts, donated a thousand pounds to Trust funds at half time in last week’s game.

The Trust’s treasurer, Bob Bain, was delighted to accept the cheque from FP representatives and Dons stalwarts of yesteryear, Bobby Wishart, of the 1954-55 League-winning side and Jimmy Wilson from the mid-60s who was the first player I ever saw place a penalty kick into a corner of the net, having fooled the Motherwell goalkeeper into diving in the wrong direction.

That was on 3 December 1966, it happened at the King Street End, it was a day of typical Aberdeen driving sleet and we won 2-1. Instant recall, but yet I can forget where I left the car in the airport car park after two days away. That’s the impact the Dons have on many of us, and if you are also thus afflicted, the Trust would be glad to have you aboard.

Thanks to the FPs, the collectors and the fans who donated.