On Fire With Fergie – Me, My Dad and the Dons – Stuart Donald.

As promised last week, when Aberdeen Voice appeared to be unique in giving media coverage to the launch of this and the Heritage Trust’s books, Voice’s David Innes, rises from his settee where he’s been glued to On Fire With Fergie since he took it home. 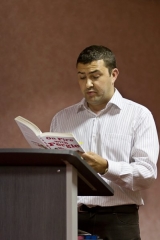 Stuart Donald’s three-pronged approach in writing On Fire With Fergie, documenting his personal rites of passage story of falling in and out of love with the 80s Dons, recording those incredible victories and celebrations whilst paying tribute to his late dad, Gordon Donald, “The Chancellor” to whom the book is dedicated, is beautifully successful.

Although of much older vintage than the author, I can identify with almost every sentence of Stuart’s narrative. The childhood naivety, the swelling hope, the tears, the tantrums, the eventual realisation that The Man in the grotesque guise of the Old Firm will flex his financial muscle, call in old favours and render our spike on the success graph as a temporary and unsustainable blip. But by hookey, it was fun while it lasted.

This is much more than a fitba book – it’s a well-written tale of familial relationships, adolescence, quiet rebellion and growing up and it’s among the best terracing-derived accounts of club football that I have read.

The passages of reported and remembered conversations, especially those featuring Donald senior are rib-tickling and have display stout granite-like profundity typical of wise NE Everydad. That they are reproduced in Doric renders them all the more relevant to the Dons and all the more pointed. I think that most Dons fans would have been able to relate to the sage but passionate Chancellor. It would surely have been a pleasure to have known him.

It’s heartening too that Stuart Donald is unafraid to say what he (and most Dons fans) thought thirty years ago – in turn describing in scornful terms Old Firm violence and bigotry, peer jealousy, despicable Dundee United’s status as a minor irritant to the Dons with whom they were always crazily bracketed by lazy hacks and who always crumpled, papier mache-like, in the face of the Old Firm when the chips were down. I trust he has not mellowed on any of these scores, for these have not changed much.

This is much more than a fitba book – it’s a well-written tale of familial relationships, adolescence, quiet rebellion and growing up and it’s among the best terracing-derived accounts of club football that I have read. I recommend it to anyone who lived through those sweet, heady days or to anyone curious about how fans viewed the most glorious period of our shared fitba and community heritage.