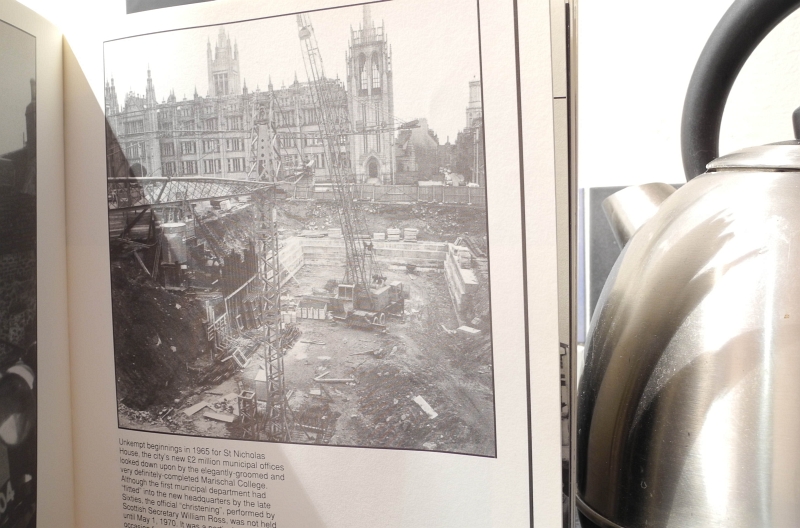 The old Aberdeen Council office building formally known as St Nicholas House is being torn down piece by piece after less than fifty years.

At today’s prices, the £2m cost of the 1965 project may seem small fry to many Aberdeen residents, who are more used to municipal architectural bills on a far grander scale.

Granite-built projects such as Marischal College, which lies just across the road from the part-demolished 1960s concrete multi-storey office block, often last for hundreds of years at a far lower cost per century.

Of course, in its day, St Nicholas House was seen as the way ahead in terms of municipal architecture. Scottish Secretary Willie Ross officially opened it on the first of May 1970. The retiring city architect, George Keith, was present at the opening. Seemingly St Nicholas House was one of the “outstanding features of the considerable role Mr Keith played in the design of post war Aberdeen.”

Many city residents were looking forward to its demolition. The blowing up of the building was a favoured option, and camera enthusiasts are reported to have been enthusiastically checking out vantage points all around the city in expectation of the event. However the building’s tightly contained position within the city centre precluded destruction by an explosives team, and the current demolition carries on piecemeal.

Aberdonians are this week invited to comment on plans to re-develop the site. Gordon McIntosh, Director of Enterprise and Planning, has described the new proposals by Muse Developments, as “exciting.”

If you care about the future of your city, take a look at the consultation exhibition at Aberdeen Art Gallery. It runs until November 2nd and is free to view. Employees from Muse Developments Ltd and the Aberdeen City Council will be on hand to advise and listen to your comments.

Until 8th November, you can have your say online. Relating to Marischal Square, views are being sought on transport options for Broad Street. An online questionnaire will be open until 22nd november.

A more detailed scheme to re-develop the site is expected to be lodged with the City Planning Department in a few months.

Comments to the Marischal Square Working Group can be sent via Councillor Marie Boulton, Depute Leader of the Council at :  mboulton@aberdeencity.gov.uk