The past year has been a particularly active year for Aberdeen and District Campaign for Nuclear Disarmament who have broadened their activity on a number of fronts. Jonathan Russell writes. 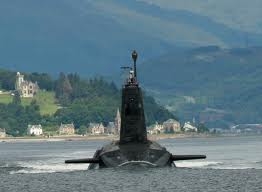 We now have our own Facebook page which has been putting out related news items on most days with several articles often appearing on the same day.

The amount of information coming out about Trident and nuclear weapons in general has escalated over the past year particularly in relation to the Independence debate.

The information being sent out to those that have signed up to our yahoo groups e-mail list has also increased.

We have also run a series of articles in Aberdeen Voice, our local alternative on line newspaper, on the effects and Economics of Nuclear Weapons. Aberdeen Voice has also been particularly helpful in advertising our events. We have also had some publicity on STV and in the Evening Express and Press and Journal. The SNP and the Labour Party have both been helpful in circulating information as have the United Nations Association, Aberdeen Against Austerity and the Aberdeen branch of Scottish Palestine Solidarity Campaign.

Our public stall outside Marks and Spencer took place weekly during the warmer months and allowed us considerable interaction with the general public. We also had stalls at an Anti- Racist event at Aberdeen Trades Union Council and at One World week at St Mark’s. Last, but by no means least, we have managed to get letters published in the Press and Journal and Evening Express.

We continued to have regular meetings on the second Monday of the month and these have included talks on a variety of subjects: 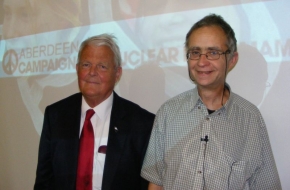 The meeting was held at Aberdeen University and hosted by the student/youth United Nations Association.

We also arranged for STV to interview Bruce which was subsequently broadcast on their news program.

Bruce’s visit was part of a wider tour of the East of Scotland co-ordinated by ourselves which also included Inverness, Brechin and Dundee.

We continued with our two regular events; the Hiroshima Memorial Day and our Poetry and song night.

Hiroshima Memorial Day takes place on August 6th, the anniversary of the dropping of the first atomic bomb. At the memorial we have a number of speakers, some poetry and songs then a one minute’s silence. Then in a particularly atmospheric gesture, we float 200 candles onto the River Dee, each of which represents 1,000 of the 200,000 people killed at Hiroshima and Nagasaki.

We also had speakers from the Green Party, the United Nations Association, the Quakers and the Aberdeen branch of the Scottish Palestine Solidarity Campaign. Hilda Meer’s poetry was read and Kirsty Potts sang some rousing songs prior to the candles being sent down the river. We have run the event since 2009 and each year the attendance has increased.

Thanks go to all those that helped with the candles and all those who attended this very positive event.

This annual event took place at the Quaker meeting house on International Peace Day.  Songs were sung by Kirsty Potts, Dave Davies, Dennis Shepherd and friends and Simon Gall.  Poems were read by members of the group with special thanks going to Hilda Meers both for her poetry reading and for the poems from her recently published poetry book ‘Pathways’ published by Braswick.

We had a very successful New Year 2013 party at Jonathan’s. 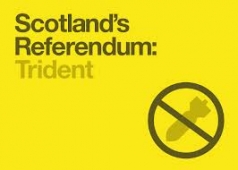 A number of member and supports have sent letters to the Ministry of Defence and we encourage others to do so.

2013 is likely to be an exciting and eventful year: 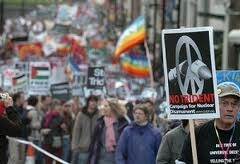 One of the most significant events of the year will be the weekend of action scheduled from Saturday 13th April to Monday 15th April organised by the Scrap Trident Coalition. This will involve the following:

I would like to thank everyone in whatever way who has participated in the work of Aberdeen and District Campaign for Nuclear Disarmament over the past year. Particular thanks go to Christian Allard for setting up and operating our amazing Facebook page, to Sally Dickson for doing all the minutes and inspiring us to have stalls and to the forever present and diligent Mike Martin.