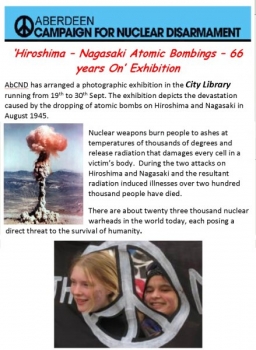 AbCND has arranged a photographic exhibition in the City Library running from 19th to 30th Sept. The exhibition depicts the devastation caused by the dropping of atomic bombs on Hiroshima and Nagasaki in August 1945.

Nuclear weapons burn people to ashes at temperatures of thousands of degrees and release radiation that damages every cell in a victim’s body.  During the two attacks on Hiroshima and Nagasaki and the resultant radiation induced illnesses over two hundred thousand people have died.

There are about twenty three thousand nuclear warheads in the world today, each posing a direct threat to the survival of humanity.