Hollywood And The Bomb – or Trivialising a Nuclear Holocaust 1945-1990 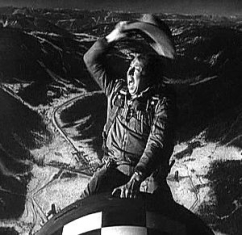 First, let me say that films aren’t made in a vacuum. In a way they reflect the needs and desires of the society in which they’re made.

Sometimes they are made to reflect the interests of the ruling elite in that society and sometimes, rather more rarely, they’re made to challenge that elite and its world view.

Hollywood, and to an extent the British film industry produce, in general, films without an overt political message but this does not mean there is no political influence.

In the US, the military’s influence on Hollywood has been increasingly pervasive since the establishment of the Committee of Public Information in early 1917 to present the US’s entry to the First World War as a noble crusade and not as a desperate prop for that country’s massive investment in the failing Allied cause.

Following the Second World War, the Pentagon formally established its ‘film approval’ process and in 1948, set up a special Movie Liaison Office. With the onset of the Cold War, the US military demanded even greater control over the movies it ‘assisted’.

Producers and directors seeking access to military equipment, locations or personnel, or even Department of Defense archival footage, are required to have their work vetted by the Pentagon. Those prepared to reshape their movies in line with Pentagon directives are given substantial financial and technical help; those unwilling to accept its dictates are denied any assistance.

Since then, plot and character changes and outright historical falsification have been the most common demands made by the military, its stated aim being to encourage movies which boost ‘recruitment and retention programs’. Filmmakers are told that excessive foul language, alcohol and drug use, sexism, racism and other bigotry in the armed forces must be toned down and replaced with ‘positive’ portrayals. In fact it is not unusual for the Pentagon to demand entire scenes, even central characters, be deleted.

There’s a very good David L Robb book on the subject, Operation Hollywood: How the Pentagon Shapes and Censors the Movies.

So, bear this in mind as you read on.

Hollywood and the Bomb

My delving around revealed that the first nuclear war film made in Hollywood was a gem called The First Yank Into Tokyo, rushed out in September 1945, which featured a rather large American boxing star Tom Neal being parachuted into the land of the Rising Sun disguised as a Japanese soldier – honestly – to rescue a captured nuclear scientist.

Predictably, he rescues the scientist and wins the heroine before the film ends with stirring music and an approving gravelly voice narrating over film of the mushroom cloud at Hiroshima – presumably engendered by work of the rescued scientist.

Needless to say, the real films taken by the US military showing what had actually happened in Hiroshima and Nagasaki were confiscated by the US government and locked away for 25 years, whilst any reports of the attacks were systematically discredited.

For example, within three days of Wilfred Burchett’s shocking dispatch on radiation sickness, The Atomic Plague appearing in the Daily Express on September 5 1945, the US military had a front page story in the New York Times disputing the notion that radiation sickness was actually killing people. Their news story included this remarkable commentary, “The Japanese are still continuing their propaganda aimed at creating the impression that we won the war unfairly, and thus attempting to create sympathy for themselves and thereby obtain milder surrender terms”.

John Hersey’s 1946 film Hiroshima, which moved beyond generalised images of a destroyed city to offer sharply-etched narratives of six survivors’ experiences, was also predictably rubbished and concealed by the US government as best it could.

So here we are; it’s the late 1940s – two nuclear bombs have gone off in Japan and very few people in the West know that much about them or their effects, and those who do go to great lengths to conceal the facts.

On the other hand, some who did know about the effects of the bombs did act and here we find the first and most unusual band of nuclear protestors.

Admirals are in an unusual position as far as military command goes. Whereas an army commander can be thirty to fifty miles behind the lines and his air force counterpart can be three thousand miles away from the action, an admiral is generally there with the fleet, taking the same risks and seeing the same carnage as the crews of the ships, possibly engendering a greater sense of social realism to war’s horrors.

Whatever the reason, in 1948 and 1949, during stormy congressional hearings on the US Air Force’s ill-fated and unbelievably expensive nuclear white elephant, the B-37 bomber, there appeared what was to be called the Admirals’ Revolt – a group of US senior naval officers consisting of Secretary of the Navy Sullivan, Admiral Denfield, Rear Admirals Ofstie and Radford, and about a dozen others supported by James Forrestal, the then US Secretary of Defence.

Rear Admiral Ofstie’s evidence to the hearings was particularly crucial as his post war assignment was to the US Strategic Bombing Survey of Japan, where he interviewed many surviving Japanese officials and civilians. In 1946 he was detached and was reassigned to the Joint Chiefs of Staff Evaluation Group and served at the Bikini nuclear tests.

So, here we have a fighting admiral who has seen death and destruction at close hand and knows about indiscriminate bombing and the effects of nuclear bombs. On October 11, 1949 he and Rear Admiral Radford testified before the Combined Services Defence Committee on the effects of nuclear warfare and concluded, ‘Strategic air warfare, as practised in the past and as proposed for the future, is militarily unsound and of limited effect, is morally wrong, and is decidedly harmful to the stability of a post-war world.’

Cue major uproar in the US armed forces and government.

President Harry H Truman, faced with this revolt, had a great deal of soul-searching to do. However, at some point, it was presumably pointed out to him that among the companies who were profiting massively from the B-37 fiasco and would benefit from future huge USAAF contracts, were those who paid his election expenses. The President and his cabinet predictably came down on the side of the USAAF and set the scene for half a century of nuclear brinkmanship.

Defence Secretary Forrestal was hounded out of office, suffered a nervous breakdown and later committed suicide in rather suspicious Kelly-esque circumstances. The admirals involved in the revolt were either eased out of service or remained unpromoted until their retirement.

Truman’s eventual decision may also have been influenced by the events of August 1949 when the first Soviet nuclear bomb, codenamed Joe One, was tested in Kazakhstan.

In addition, the setting off of Joe One generated huge levels of paranoia and hysteria in the US which the government and the embedded media tried to use by generating two rather contradictory notions:

– the deranged and murderous Commies could start a nuclear war any minute.

– don’t worry, your government will show you how to survive it.

This dichotomy was to result in a recurring theme in the 1950s and such august publications as Reader’s Digest produced upbeat articles such as You Can Live Despite The A-Bomb and How US Cities Can Prepare For Atomic War, whilst nuclear bunkers were routinely referred to more prosaically as ‘air raid shelters’.