Planet Earth:  is it the ‘Ace Cafe’ stopover for alien inhabitants of other planets in the Milky Way?  Are we alone? Do we want to be alone? 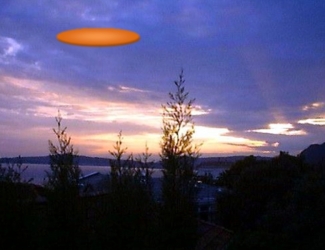 You might think your City Councillor is from another planet, but could you be onto something there?

Are there strange visitors flying past in cigar or dustbin-lid shaped crafts, stopping long enough for some funny experiments and to stock up on haggis and ‘Visit Scotland’ t-shirts?

Erich von Däniken wrote his controversial book, ‘Chariot Of The Gods’ some 50 years ago in which he contended that alien visitors came here in civilisation’s early history, teaching us how to use fire, do geometry and sudoko and how to know which recycling bin to use on what day. The 1950s hysteria of newly-nuclear America made the nuclear family paranoid:  it was afraid either of ‘reds  under the bed’ or ‘little green men’, which was reflected in dozens of sci-fi ‘B’ movies of the period.  It was around this time that the term ‘UFO’ for ‘unidentified flying object’ was coined.

Naturally there is a galaxy of Internet sites telling you everything you’d ever wanted to know about UFOs, but were afraid to ask.  And of course, that means people are reporting UFOs over a field somewhere near you. One site, ‘UK UFO Sightings’ has a list of Aberdeenshire sightings – approximately one per month last year.  Then strangely in January of this year, there are a cluster of  three sightings.  The website address is http://www.uk-ufo.co.uk/.; anyone is welcome to post their UFO sightings.

The website advises visitors “If you think you have seen a UFO, then this is the site to share your experience. Our aim is to provide a simple way for the general public to log their UFO sightings into one easy searchable site” – which is just what a host of your fellow Aberdonians are doing.

Some sightings have been explained – hoax photography, weather balloons, and fireworks.  Then again – many have not

The thirteenth of January sighting report seems rather typical.  The UFO spotter was having a cigarette (of some kind) when they saw a ‘white ball shoot across the sky’ very fast in a downwards direction until out of sight. …apparently the sky lit up five times afterwards, each time the light became dimmer. Could it have been a meteorite or shooting star?

On the one hand, it is too easy to laugh at these claims until you realise just how many people over a considerable time period have sworn they’ve seen unusual things in the sky.  Airline pilots, military personnel, police, as well as hysterical civilians are all unshakeable in their stories. And no less a person that Stephen Hawking points out that considering the vastness of space and the infinite number of planets, it would be conceited to think we are the only life form out there.

There seems to likewise be evidence showing microorganisms are present on some of the meteorites that have survived entry into our atmosphere. Some sightings have been explained – hoax photography, weather balloons, and fireworks.  Then again – many have not.  Files were recently released by the UK Government, going back to WWII covering a host of UFO sightings.  Apparently Winston Churchill ordered that any UFO sighting be kept secret to prevent “mass panic”.  These files are now in the public domain. But keep this in mind:  Hawking also said if there is intelligent life out there, we ‘should keep our heads down’.