At the next meeting of Aberdeen CND on Monday 10th April, Jonathan Russell, Chair of Aberdeen CND and also a member of Campaign Against the Arms Trade, will be leading a discussion on the Arms Trade. The meeting will take place at 7.30pm on the Top Floor of the Belmont Cinema, Belmont Street, Aberdeen. 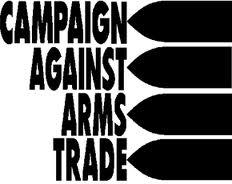 The arms trade is a deadly, corrupt business. It supports conflicts and human rights abusing regimes while squandering valuable resources which could be used to deal with the many social and environmental challenges we face here on Planet Earth. It does this with the full support of governments around the world, in particular the five permanent members of the United Nations  Security Council: the United States, Russia, France, China and the United Kingdom.

While very few countries sell large volumes of weaponry, the buyers are spread across the world. Other than to the five permanent UN Security Council members, the largest buyers are in the Middle East and South East Asia. The arms themselves range from fighter aircraft, helicopters and warships with guided missiles, radar and electronic warfare systems, tanks, armoured vehicles, machine guns and rifles.

The common misconception is that it is the illegal trade that is damaging, while the legal trade is tightly controlled and acceptable. However, the vast majority of arms sold around the world including those to human rights abusing governments or into areas of conflict are legal and are supported by governments. In 2007 the value of legal arms around the world amounted to 60 billion dollars. The illegal market is estimated at 5 billion dollars:  many illegal weapons end up as legal weapons.

The arms trade exists to provide weapons to those who can pay for them. What the buyers do with the arms, what political approval the sales signify, and how money could be better spent appears irrelevant to the arms companies and our governments. The UK Government’s 2010 Human Rights Annual Report identified 26 countries of concern. In that year the UK approved arms licences to 16 of these.

There’s a sense that in the past we were embarrassed about supporting defence exports. There’s no such embarrassment in this Government.

David Cameron was in the Middle East on a high-profile mission to sell arms when the democracy movement started in the Middle East. Selling arms to a country in conflict whether internal or external makes the conflict more deadly and longer lasting.
If there is tension between countries or within a country, then arms purchases are likely to increase this tension and make actual conflict more likely.

Even when conflict has ended, arms, particularly small arms, may remain in large numbers (as in Libya at present), fuelling further conflicts and/or criminal activity.

Every year the UK Government authorises the sale of arms to well over 100 countries. This is hardly surprising given that it is Government policy to vigorously support arms exports. Peter Luff, Minister of Defence Exports in the present UK Government, has stated that:

“There’s a sense that in the past we were embarrassed about supporting defence exports. There’s no such embarrassment in this Government.”

Arms companies and Government are inseparable when it comes to selling arms. The Government’s UK Trade and Investment (UKTI) department is a vital element of UK’s arms dealing. In 2008 the Government opened the Defence and Security Organisation which promotes weaponry on behalf of arms companies. There are 158 civil servants in the Defence and Security Organisation while other non-arms sectors have137 staff. This is despite arms accounting for less than 1.5 Percent of UK exports.

Research carried out for Campaign Against the Arms Trade (CAAT) by the Stockholm International Peace Institute assesses the level of subsidy by Government to the arms trade in the UK to be around £700 million a year.  In 2010 the UK Government issued 10,850 arms export licences, refused 230, and revoked 14.

Half of the refusals related to proliferation of Weapons of Mass Destruction, with a maximum of 76 being revoked on the grounds that they contributed to internal repression, internal conflict or regional instability. Foreign office embassies also promote the arms sales, as do the Ministry of Defence armed services. Arms fairs are common in the UK and around the world.  The governments of host countries provides support for their arms firms.

Arms sales from the UK seem to vary from year to year:

Of the 16 countries identified by the Stockholm International Peace Research Institute as locations of major conflict in 2009, the UK sold arms to 12.

Columnist Will Self –  “War, the arms trade and the abuse of language”

BAE arms are the UK’s main arms company and has military customers in over 100 countries. BAE’s focus over the past few years has been on increasing sales to the US, specifically targeting equipment for conflicts in Afghanistan, Iraq and Libya, and supplying Euro fighters and other arms to Saudi Arabia. BAE routinely supplies countries which the UK Foreign Office considers as having ‘the most serious wide-ranging human rights concerns’.

The casualties of conflict are now overwhelmingly civilian, increasing from 50% of war related deaths in the first half of the twentieth century to 90% near the end of the century.

The arms trade affects development both through the money wasted on arms purchased and through the conflicts fuelled by arms.

A study in 2007 by Oxfam of the economic cost of armed conflict to Africa estimated that Africa  loses around 18 billion dollars a year due to wars and that armed conflict shrinks an African nations economy by 15%.

As well as the direct effects of military spending, medical costs and the destruction of infrastructure, there are indirect costs on the  economy and employment suffers ( this does not take into account the countless human misery caused by loss of life and sustained injuries effecting families and friends as well as the individuals concerned).

The study estimated that the cost  of conflicts in Africa since 1990 was equivalent to the aid provided to them by major donors.

Even when conflict is not taking place money diverted to arms is a drain on government resources and takes away from vital spending on health education and infrastructure. The massive 1998 South African arms deals for aircraft, helicopters, warships and submarines cost the country over £8billion. Yet most of the population live in shanty towns and other poor housing and South Africans with HIV/AIDS were told that the country could not afford ant-retroviral medication.

Despite desperate poverty and its recent appalling history of armed struggle, the UK government is actively promoting arms struggle to Angola. The UK government not only approved arms exports to Angola it actively organised an “industry day’’ when HMS Liverpool docked in Angola waters and hosted Angolan political and military officials.

The arms trade causes countless misery in our world; it is a poor use of limited resources which should be used to make this world a better place. We need to question the thinking in the world that believes you only get what you want by force. The five members of the Security Council should start taking on their responsibilities and use conflict resolution rather than warfare to sort the many conflicts that take place both between and within countries.