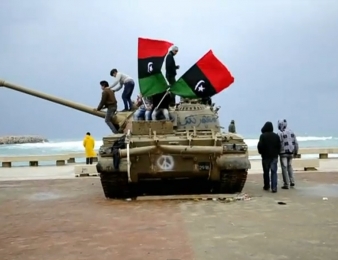 In June of this year I  wrote an article on the situation in Libya called ‘Libya another Brutal Conflict’.
In it I suggested a way forward would have been via negotiations, which would include the expectation for fair elections run by the United Nations, the withdrawal of NATO and the use of UN peacekeepers.

Qaddafi would have been forced to face his opposition but in a non-bloody way. Only if such negotiations failed would military action be considered.

The mantra regarding the war on Iraq was ‘weapons of mass destruction’; this proved to be a lie. The mantra in relation t oLibya has been ‘the defence of innocent civilians’. This, as the conflict has escalated, has proved clearly not to be the real objective. Investigations by Human Rights Watch, Amnesty International and a UN commission headed by the legal scholar Cheri Bassioni found there was no evidence of the atrocity stories which were given as the reasons for NATO action.

Yet this was not listened to by our politicians and was not widely reported by the media. What has clearly happened is a mission of regime change which went far beyond the UN mandate. Such developments were opposed by the US Congress and never properly debated in our own Parliament.

Rather than protecting civilians, NATO weapons have inevitably killed them.

Their targets increasingly widened from attacking tanks that were moving towards Benghazi, to attacking all Libyan Military installations, to attacking any building that was seen as supporting the Gaddafi administration.

Inevitably there were civilian casualties. On the day of the rebel attack on Tripoli, more bombs were dropped than on any other day in NATO’s history. The rebels were also being supported and trained by troops from NATO countries, and as evidenced by the Sunday Times, some were Libyan exiles living in the UK. This has led to an even more bitter war between the ‘rebels and Kaddafi loyalists with disastrous human consequences.

The hospitals are not coping and Human Rights Watch and Amnesty International are reporting human rights violations on all sides. Human Rights Watch consider that the evidence suggests that the old governments Khamis Brigade killed 45 detainees. The horrors of what happened to Kaddafi troops and the disappearance of all the medical staff at Abu- Salim hospital is just unfolding as are other atrocities, but these are only the most heavily reported incidents.

We never seem to learn the lesson of the horrors that war can bring.

Richard Seymour in the Guardian reported on Peter Bouckaert from Human Rights Watch findings that he had not identified one mercenary among scores of men being arrested and falsely labelled as such by journalists. Many Libyans are black but have been labelled as black mercenaries from Africa and led to racist incidents.

So what is the future for Libya? It is almost certain that Qaddafi will be eventually defeated, but how long that takes and at what continuing human cost is still to be seen. Worryingly, anyone supporting Qaddafi will not be seen as a civilian but as a supporter of a mad and dangerous dictator. The rebels are not a united force. The National Transitional Council has been recognised by over 40 foreign states; however, has it been recognised by the militias on the ground?

Abul Fatah Younes, the leader of the  Rebel army, was murdered by one of the Islamic militias and this in turn led to the sacking of the whole cabinet by Musta Abdul Jalil, the chairman of the National Transitional Government.

Will this Government be able to rule or will fighting continue between the various factions, in particular those aligned to a more Islamic agenda and those not? These groupings are now highly armed and as our policies did in Afghanistan, they could easily come back to bite western interests. Atiyha Abdl al Rahman, the deputy leader of Al-Qaida who was killed by US drones in Pakistan, was Libyan.

Qaddafi’s regime became increasingly oppressive over time. In his early years as a revolutionary leader, he was involved in pulling down prisons.  Being active himself over the years led to the atrocities that more recently took place of Islamists in Libyan prisons. Hopefully human rights will improve, but that has yet to be seen, and Libya was far from being the only country which has tortured and killed the more extreme Islamists.

Any new government will still have to find ways of dealing with Islamic groups and could end up being equally oppressive.

The Qaddafi regime was oppressive to its enemies, they did however have the highest social indicators in the Third World with better housing, health care and standards of living than in other Middle East and third world countries. As with Iraq these social strengths and the resulting effects on the countries well-being are sure to decline particularly if conflict continues.

Libya was not a country in debt, but it is now, and like us it will have to become beholden to the banks for money borrowed to rebuild the country. Who will own the huge reserves held in foreign banks which were there in part to deal with Libya’s future when the oil stocks have gone?

This has caused considerable indignation on the African continent.

Libya has historically produced 1.5 to 2 million barrels of oil a day. Qaddafi was hated by the west for nationalising Libyan oil and though he has more recently been co-operating with Western firms he has still been directing considerable investment into the economy and saving for its future.

Any new government will, unless clearly Islamic, be beholden to the West, and as such oil is almost certain to be obtained by the West more cheaply; the cost of oil on the markets has already gone down. Libya will also likely have military NATO bases for any future developments in the Middle East.

The poorer Libyans will, I suspect, be those who will be the most badly affected but others will gain and disparities in wealth will increase to the overall detriment of the country. Hopefully human rights will improve, but that has yet to be seen. Qaddafi was supportive of women’s involvement in society and was one of the reasons that he opposed so strongly the more extreme tenants of Islam and its supporters in Libya.

The future for women could go either way, but is certain to cause tension in the new Libya.

Due to the way that NATO overstepped the UN resolution, there is now reluctance by many countries to do anything in Syria or the other Middle East countries. Damage has been done to International relations and the workings of the United Nations due to NATO’s actions.

Why have we, and why are we continuing to arm dictatorships in countries like Saudi Arabia, Egypt, Bahrain, Syria, etc.  which are oppressive to their people? In fact, why are we arming any country? All armaments have the potential for use both between warring countries and on countries own citizens. Yet selling more arms is a key target of the present UK Government.

The selling of arms does lead to profit and work for those involved and money for Government. However overall spending on wars leads to fewer resources to be spent on other areas and in the United Kingdom, France and the United States it will lead to increased cuts in public services which will affect us all, but in particular the more vulnerable people in our society.

The United Nations was set up to try and stop wars between countries. Libya had not invaded another country.

The intervention was, however, based around the doctrine of  ‘the responsibility to protect’ following The Rwandan genocide. The way NATO has acted by clearly taking sides in Libya has brought this doctrine into disrespect. The press in the UK have in the main been heralding the success of the Libyan intervention, but if you dig deeper this can only be questioned.

The United Nations needs itself to have increased power to stop the manipulation that has clearly taken place around the Libyan conflict.

So what can we do?