Dr David Kennedy served as  Principal of RGIT/RGU, having been appointed in November 1984  and took up the post on 1 May 1985.  He retired in September 1997. Aberdeen Voice is delighted to present, in two parts, Chapter One of his forthcoming book wherein he recalls the educational debate of the early 1990s and reveals behind the scenes moves to merge Aberdeen’s two higher education establishments. 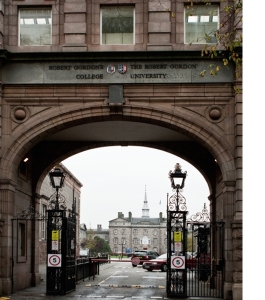 1991 was an eventful year for higher education in Britain. Colleges operating under the aegis of the Council for National Academic Awards (CNAA) had conducted a lengthy campaign for parity of esteem with universities, which had now met with success.

A Government White Paper published on 20 May 1991 set out the proposals for all polytechnics to have the right to award their own degrees and to decide on the name by which they chose to be known.

Here in Scotland, the immediate expectation was that the five major Scottish central institutions, which were fully equivalent in all but name with the English polytechnics, would also become universities.

In launching the White Paper, the Secretary of State for Scotland, Mr Ian Lang, confirmed that polytechnics would become universities.  He went on to say that other colleges would have to wait until criteria were devised by which they might be judged on their suitability for the university title.  He stressed that the title of university had a very special distinction in the United Kingdom and government had to be sure before letting just any old institution call itself a university.

I took the precaution of phoning The Scottish Office to check the accuracy of what had been reported.  This was confirmed, but with regret over Mr Lang’s addition about the distinction of the title ‘university’ to the speech they had prepared for him.

In 1986, two local authority colleges, one in Edinburgh and the other in Glasgow, were brought under the direct funding of the SED.  They became central institutions.

The one in Edinburgh had a close link with the then Secretary of State for Scotland, Mr Malcolm Rifkind.    His wife had worked at the college where she enjoyed a happy relationship with her colleagues.  The college principal became an educational adviser to the Conservative Party in Scotland, SCUA, and within a couple of years Napier College triumphantly announced itself as Napier Polytechnic Edinburgh.

The latter must have known what was going on, but kept it from the rest of us.

This was despite the fact that the Scottish Office had hitherto adamantly refused to allow Scottish institutions to use the title polytechnic and had turned down a number of earlier proposals to do so.

Seemingly, having bedazzled the Scottish Office with Napier stardust, its principal went on with great confidence to say that their next name change would be to that of university.

The longer established and more mature institutions were surprised that the expected blast from the Scottish Office never materialised.  We were to learn later to our cost why this was.

Two years after Napier, and shortly before the publication of the White Paper, Glasgow College of Technology changed its name to Glasgow Polytechnic and advertised the fact as “having earned a few more letters” after its name!  Its Principal told me that they had used the word ‘earned’, because they had undergone a thorough vetting by The Scottish Office.  The latter must have known what was going on, but kept it from the rest of us.  We were never told about any change in policy, nor that the title of polytechnic was of such profound significance in Scottish higher education.

Many non-polytechnic colleges in England had grown in size and maturity and were clamouring for polytechnic status.  Government asked the funding council responsible for polytechnics and colleges to recommend the criteria for polytechnic designation.  It did this towards the end of 1989: long after Napier had changed its name!  The criteria were accepted and a handful of new polytechnics were created.  RGIT would have satisfied the required conditions.

Meantime, the Principal of Napier Polytechnic did a little kite flying for the Scottish Office.

He circulated a paper suggesting there were too many institutions of higher education in Scotland and proposing possible mergers.  ‘Mergermania’ was in the air.

No one at RGIT had been consulted about this and the announcement caused quite a stir.

During the seventies, universities, unlike colleges in the non-university sector, had been funded to pay for staffing and space in advance of any expansion.  This was before the experts had got to work on their predictions of demographic decline, but well after the decline in the birth rate had started.

By the eighties, universities found themselves with an embarrassment of riches: too much space, too many staff, and too many under-utilised resources.  Swinnington-Dyer of the University Grants Committee spent much of his time trying to rectify the funding follies of earlier times.  The University of Aberdeen was one of those particularly badly hit, as was the university in Cardiff, which perhaps suffered most of all as a result. Edinburgh University had to sell off some of its art treasures to pay its debts.

First mention of a merger between the two institutions in Aberdeen occurred early in 1981, when the principal of the university issued a press statement to the effect that his university would be taking over RGIT.  No one at RGIT had been consulted about this and the announcement caused quite a stir.  Unsurprisingly, there was considerable resistance to the suggestion.

Shortly after my appointment to RGIT, the principal of the university invited me over for lunch in order to explain the rationale of his plans for merger between our two institutions.

The institute would be asset-stripped of degree courses, students, and estate, leaving a rump of sub-degree work to be done by whichever staff were left.  The sale of the estate would pay for staff redundancies and the university would be immeasurably strengthened and enlarged.

This view received strong support from some local people.  I was told my position would be protected: a professorial title and an attractive salary, because universities were free to pay professors on a very wide scale.

For my part, I explained that I had already refused the title of professor – being of a Quakerish disposition, titles have never been high in my order of priorities – and nor was money an over-riding concern since, being somewhat abstemious, I had more than enough to meet my needs.  However, I understood the point that was being made very well.  In their position, I might have agreed with it.  But I had a different set of responsibilities, not least to students and staff of the institution for which I carried responsibility.

A senior official in The Scottish Office told me that three influential businessmen had persuaded the Secretary of State of the benefits of a merger.  If RGIT were denied the right to award its own degrees it would be forced to seek the help of another degree-awarding body, which, of course, would have to be done on terms dictated by that body.  Their hope was that the Institute would merge with its local university.

A local parliamentary candidate (Nicol Stephen) issued a press statement of ‘the plot by the Scottish Office to get rid of Aberdeen’s world famous Robert Gordon Institute of Technology’.

Voice will carry part 2 of A Change of Name next week recalling the fight to save the much-loved and respected RGIT from being absorbed by a predatory neighbour; of the triumph in attaining university status on the abolition of the CNAA; and the bestowal of full degree-awarding power on the new university.