It’s the debate we weren’t supposed to hear, it seems, and there is suspicion that the full facts were held back from publication to Aberdeen residents. Public opposition to a controversial scheme seems to be growing. With thanks to Suzanne Kelly. 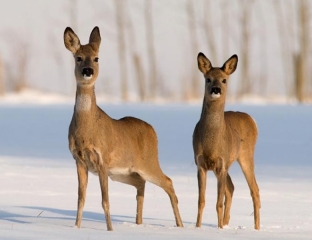 Local campaigners, opposed to Aberdeen City Council’s cull of the Tullos Hill roe deer, have placed advertisements in the local press and launched a postcard campaign.

The first advert appeared in Aberdeen’s Evening Express on 7 September, and it appears again in the 21 September issue of Aberdeen Citizen.

Campaigners will also be out in force in Aberdeen city centre this Saturday (24 September).

“The City Council may think they can go ahead with the cull of the roe deer unnoticed,” campaigner Suzanne Kelly said, “but the truth is the opposition is growing daily. People are watching the hill and reporting anything that might indicate a cull.”

The advertising campaign spells out some of the many reasons why opponents are so fierce in condemning the Council’s plans. These reasons include:

A hunter in camouflage gear with a gun on Tullos Hill was reported to police by a dog-walker on 5 September, but the police are neither confirming the report nor supplying any further information at present.

Earlier this month, the City Council mentioned the tree planting scheme, but not the deer cull, in a full colour, four page Aberdeen Citizen supplement touting its environmental credentials.  Campaigners against the cull have not yet been able to find out the cost to the public of this supplement.

Anyone opposed to this cull or who wants further information can contact: www.tullosdeer@yahoo.co.uk

“The response the advertisement received when first launched was overwhelming; the email inbox is overflowing with people – 100% of whom oppose the Council’s plans and the handling of the whole affair. I do hope that commonsense will prevail and this scheme will be altered to spare the deer. With a previous planting on the hill already costing the taxpayer £43,800 – the City must come up with a better plan and halt this senseless cull,” said Kelly.

The cull could begin in October this year; it is likely that the killing would continue for several years.