Members of the City Square Board are currently scratching their heads as to a possible use for the large concourse space which will be created if Union Terrace Gardens is decked over. One possibility under consideration is that it could be used for a new conference centre. However, this does put into question the continuing viability of Aberdeen Exhibition and Conference Centre (AECC) at Bridge of Don and the major problems which will come about if the AECC is shut down as a result.

Mike Shepherd highlights the problems that the Council is having with the AECC and what could happen next. 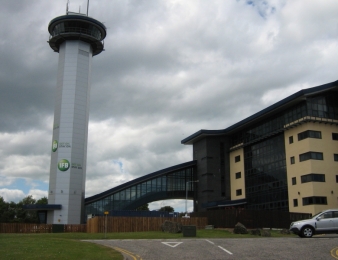 The AECC was conceived as a joint venture between Grampian Regional Council and Spearhead Exhibitions Ltd. Aberdeen City Council became its sole owner on the demise of the regional council, and now holds all its shares.
It was opened in 1985 by the then Prime Minister, Margaret Thatcher. The centre includes a 4800 seat arena, conference facilities and a hotel.

In 2003, the AECC was refurbished at a cost of £18m, with the conference facilities being completely re-built. A large viewing tower was also constructed, one of the tallest structures in Aberdeen.
The AECC is host to Offshore Europe, an event which brings millions of pounds into the local economy. Indeed, I have taken part in conferences and exhibitions there and there is no doubt that the AECC is a major boost to the local economy.

Three major conferences are planned for 2012 – the European Optical Society Annual Symposium 2012, The World Heavy Oil Congress 2012, and The Society of Core Analysts Symposium 2012. As a concert venue it has seen the likes of Bob Dylan and Neil Young play there.

However, the finances of the AECC are a mess.

Although the turnover is about £5M annually, The Press & Journal reported in November 2010 that the Council had provided loans of £28m to the centre in the last five years, as well as £8.85m in subsidies since 1998.
http://www.pressandjournal.co.uk/Article.aspx/2002662

Although the AECC has made losses, the Council justifies keeping it going on the basis that it brings a great deal of investment to the region.

Recent years have seen turmoil over audit reports, a restructuring of the Board and talk about receivership. One highly-controversial proposal was that the council should take over a project to build a four-star hotel on the site.

In February 2010 councillors approved plans to underwrite the construction of the hotel.

“AECC bosses have long believed the Centre cannot compete for important international conferences without such a hotel, and want one built in time for its flagship conference, Offshore Europe, next year. The hotel could then be sold for a net profit of between £14million and £20million, which would place the Centre on a firmer financial footing and help clear its debts.”
http://www.pressandjournal.co.uk/Article.aspx/1594201#ixzz1Og7YQrIC

Later in the year, they had second thoughts. The Council website reported:

“The full Council meeting accepted that the intended financial package to deliver AECC’s proposed hotel development carried too much risk for the Council because of the current economic climate – and voted by 24 votes to nine that alternative financial structures to deliver the facility should now be sought.

“Aberdeen City Council Leader Councillor John Stewart said: ‘The Full Council today reaffirmed its support for the region’s major conference centre and its commitment to secure a four-star hotel at the venue. However, it has been necessary to re-work the hotel project to minimise risk to the council’.

“The decision follows four months of strenuous efforts to negotiate a deal to create a hotel, involving the City Council, AECC, financial institutions, a construction company, a hotel operator, and legal and technical advisers. The negotiations were carried out following an instruction to Council officers at the February full Council meeting to continue to work with AECC on its hotel proposal, subject to any agreement being acceptable to the Council.”

Many considered the idea of the City Council getting involved in supporting and building a luxury hotel to be somewhat bizarre, one councillor bemoaning,

“The people of Aberdeen will be horrified we are now not only a local authority, but a hotelier as well”.

However, the hotel proposal collapsed as a proposition.

In December 2010, The Press & Journal revealed the conclusions of a secret audit report on the performance of the AECC. Describing its lack of accountability to taxpayers and the City Council as a “critical” risk, the report discovered an unauthorised £1.3m overspend of public money on the failed hotel project.

Monitoring of the hotel project by the AECC Board was “weak” – the directors approved £1million but £2.3million was spent.

Only £184,000 of the total was subjected to market testing to ensure best value for money, and no contracts were in place with key parties.

Overall control of the AECC was “weak” and lack of accountability to the Council a “critical” risk.

The report also warned a “significant improvement” in profitability was needed for the AECC to repay £27.7m in loans to the Council in 2017 and 2021.”
http://www.pressandjournal.co.uk/Article.aspx/2043746#ixzz1Og7Oq2RA

Since then, attempts have been made to try to recoup some of the debt. Parking charges at the AECC are now £5 per car and £10 per coach. 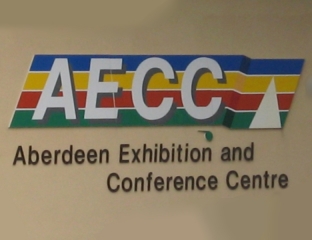 The agenda for a Council committee in January this year also mentioned a report which recommended transferring all property and land assets currently owned or leased by the AECC to the City Council.

The future of the AECC is moot. The big problem is the £28m debt owed to the Council. If the AECC is shut down, this debt will need to be transferred directly to the Council and I’m told it would be allocated to the revenue budget. Given the severe strain currently on that budget, this would cause major financial problems for the Council.

It seems odd, therefore, that the City Square Board is considering building a convention centre under the City Square (John Stewart, Footdee Community Council meeting, 30/3/11). This could easily bring about the demise of the AECC with the debt problems that would ensue.