Aberdeen Voice photographer Rob and I attended Willow’s Animal Sanctuary Open Day on 25 February and had an absolutely wonderful time. Were it not for the snow which started when we were there, Rob would have had a hard time getting me to leave. Suzanne Kelly reviews a splendid day out. 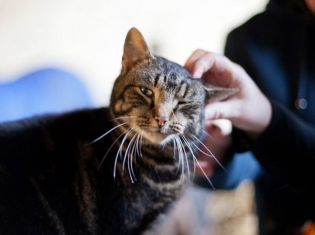 It was a nice drive to Willows from Aberdeen; the countryside is beautiful.

Willows was well signposted, and a helper was on the main road to ensure people found their way.

It is a spacious and friendly haven for animals and people. Getting to know some of each was a pleasure.

I met Sue during the event, and she told me that when she and her husband moved to Scotland six years ago, they soon discovered Willows, had visited and supported them during that time and wanted to do more. 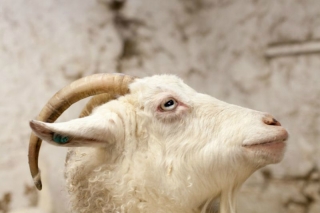 It was then that Kate found that there were like-minded people who really wanted to help, so they were introduced. Now they have a fundraising team who have thrown themselves into their task with a will.
Although they have only been together for about fifteen months, they have already raised over £9,000 through, to name but a few events, stalls at open days, coffee mornings and bingo evenings. The team now numbers eight, Sandy, Sue, Ann, David, Ashleigh, Leigh, Lorna and George.

There are many people who help with donations of prizes etc, and who help support the team in various ways. They have lots of new ideas for future events, so have confidence that the visitors will really enjoy themselves whilst supporting Willows 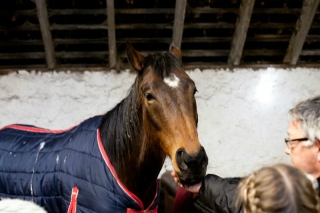 The office has a noticeboard divided into several sections. There are general news stories and items about animal sentience.

Yes, they do think, and feel, and know both pain and fear as well as love and happiness.

One section was about the fantastic work Willows does in bringing people with special abilities together with the animals. Both sides benefit from this interaction.

We now know that people with conditions such as autism improve hugely through interaction with animals. Horses and ponies can provide unique, valuable therapeutic benefits.

Sue and I talk a bit more, and she tells me of a fairly new arrival, McGill, a gigantic horse at 18.2 hands.

“His owners had rented him out, and then of course, you never know whether there were any problems, and consequently, when he came to Willows he was very nervous. And he had some behavioural issues”, was how Sue described McGill. 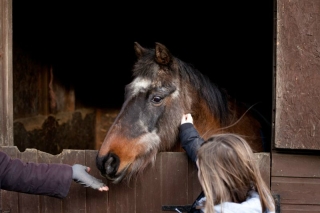 Having worked with horses in my distant past, I was ready for a highly-strung encounter with a giant. Well, McGill was indeed a giant, but he had an unbelievably sweet temperament.

Rob and I stayed and stroked him for quite some time; many others did too. If this horse had had any emotional issues, they were a thing of the past. Sandi Thom has since adopted him. She originally had adopted another animal, but it had sadly passed away.

Well, we and families patted goats, sheep, pigs, llamas, ponies, horses and the most amazingly friendly selection of cats you could ever find. 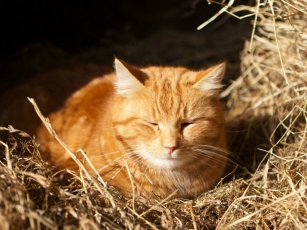 The majority of them sat on a large hay bale, which the sun was hitting. They were all soaking up the sun and loved being patted.

I particularly fell for a little feline called Gingersnap, and another gentleman called Arthur.

Arthur had been living in a tin can in a bit of scrub ground when they found him.
Sadly, he lost both his ears to skin cancer, not uncommon in white cats. I was completely won over.

We finally had a chance to talk to Sandi Thom. Her family are from the general area, and they seem to have a love of horses going back generations. Sandi seemed genuinely glad to be there, and signed several autographs as we spoke. 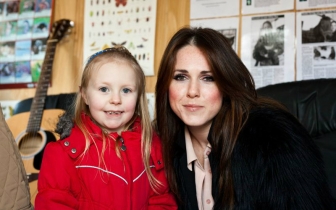 She’d also donated a very gorgeous autographed acoustic guitar as a raffle prize. We mentioned the generosity of Paul Rodgers and his wife, who adopted some thirteen animals.

Paul has donated several signed copies of his new DVD for Willows to sell (yes, I’d bought one). Ms Thom commented that people she’d met in the music industry often seemed to have a soft spot for animals. She clearly did.

Before we left, we spoke to Mr and Mrs Reid, who seemed to enjoy visiting the horses and have been coming for quite some time. 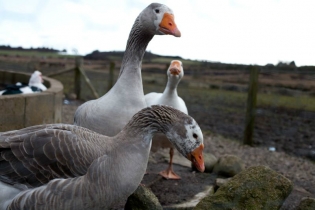 If the snows hadn’t started and if we didn’t have a fairly long drive back to Aberdeen, I might have stayed until they threw me out.
If I didn’t already have two rescue cats which are just a touch on the needy side, I just might have adopted another.

Please visit the Willows website to learn more. Willows helps wild, domestic and farm animals – and people of all ages.

If you can help, please get in touch. http://www.willowsanimals.com/ 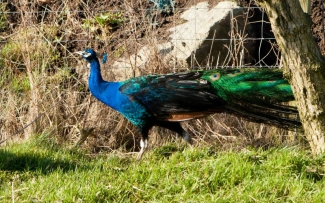 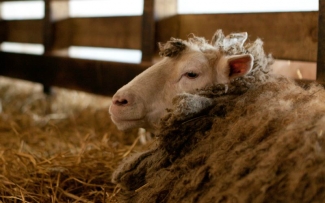 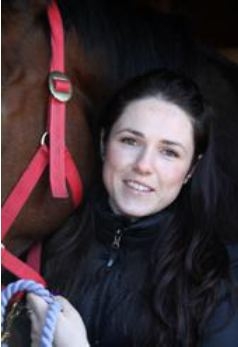 With thanks to  Jenny and Kate at Willows

Willows Animal Sanctuary  invite you to come along to an open day on 18 February from 12 noon to 4.00 pm.

Willows Patron Sandi Thom will arrive around 1pm, and autographed photos will be for sale with all profits going to Willows. Lush Aberdeen have generously donated a collection of treats to be raffled off.
There will be baked goods, ferrets and many more of the great variety of creatures that live at Willows will be on show – farm, domestic and wild animals are all given a shelter, and no healthy animal is ever put down.

In addition, legendary singer Paul Rodgers, founding member and songwriter from Free and Bad Company and member of The Firm; and his wife Cynthia sponsored 13 of Willows Animals for Christmas.

“We heard the unusual story about the piglet Babe and her great escape and dug a little deeper to find that all of the animals were in need of sponsoring.”

Paul has also donated 100 copies of his latest DVD “Live in Montreux Paul Rodgers and Friends” featuring appearances from Queen’s Brian May, Journey’s Neal Schon, Jason Bonham and others.

Signed copies of Paul’s DVD are available at £25 from Willows online shop.  Details of Willows at http://www.willowsanimals.com/ and DVD details/order form at http://shopatwillows.com/shop/catalog/search?shop_param , so even if you can’t make it to Willows on the 18th, you can still get a signed DVD. 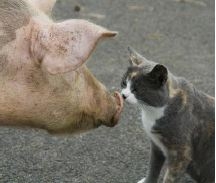 Willows Animal Sanctuary is the largest sanctuary in Aberdeenshire and will try to help any animal in distress. We operate a strict no kill policy and only euthanise an animal on veterinary advice.

We look after over 300 animals including around 60 horses, ponies and donkeys, approximately 60 cats and dogs and many reptiles as well as over 100 farm animals and birds.

We are totally dependent on donations, legacies and grants from benevolent organizations to keep the sanctuary running.

We are entirely funded by public support and receive no government funding. Unlike larger charities we have no reserves of money and are desperately short of funds. We specialise in helping elderly or more vulnerable animals that have already been refused help by well known large national charities, but we can only continue to help needy animals with your support!

Willows helps many vulnerable people with its animal assisted therapy programme. The concept of allowing rescued animals to help vulnerable people on the road back to health is very innovative and has been independently evaluated and shown to be highly beneficial.The therapeutic placements and corporate team building days include equine management, animal husbandry, therapeutic music sessions, drama, bushcraft and mediaeval re-enactment  Please contact us if you would like more details. 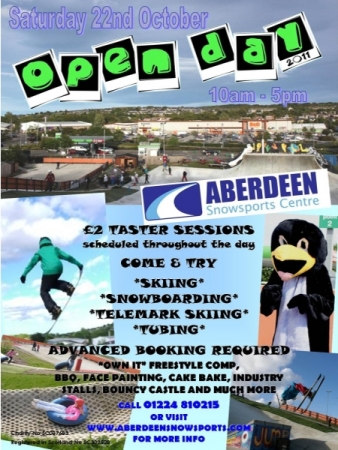 All roads lead to Garthdee this weekend when Aberdeen Snowsports Centre hosts the latest of its extremely popular Open Days, with a variety of activities planned for all the family.

This Saturday 22nd October is the date for the diary when visitors will be able to take advantage of  ‘Come and Try’ sessions in skiing, snowboarding and tubing at a discounted cost of just £2 per session.

Demand for these sessions is expected to be extremely high and advance booking is required.

Other entertainment on offer includes BBQ, a host of stalls, and a bouncy castle for the younger family members. Another attraction will be the centre’s Own It skiing competition, part of the lowlander series.

The Open Day runs from 10 am until 5 pm and further information is available on www.aberdeensnowsports.com or by calling 01224 810215.

Elsewhere in Aberdeen this weekend, the Ever popular Spike the talking cactus  will be appearing in his usual spot in the David Welch Winter Gardens within Duthie Park. 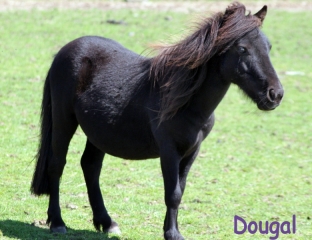 Willows Animal Sanctuary is holding an open day this weekend and hope as many people will come along and help raise money for their 300 rescued horses and other animals.
A registered charity, Willows offers dedicated care to abandoned and ill-treated domestic and farm animals, and operates a strict no kill policy.

The Animal Sanctuary has been rescuing animals from distressing situations since 1989 and whilst the number of animals needing help has risen enormously over time, the number and size of donations has dropped off dramatically.

It is hoped that the public will turn up in good numbers to enjoy a fantastic range of fun activities while at the same time provide a much needed cash boost for Willows as they strive to provide a comfortable future for the animals in their care.

New for 2011!
Fascinating and informative living history displays and talks. Learn about the past in a fun way through practical demonstrations. These talks will show which of our rescued animals would have been around in historical times.

In 1999 Willows became a recognised Scottish Charity and began to specialise in accepting animals that had been rejected by other charities as being unsuitable for re-homing.

Willows now provides a “last chance sanctuary” and most of the animals here would not be around today if Willows did not exist. We at Willows act as a lifeline for needy animals and offer them safety, rehabilitation and re-home those that are suitable. Willows offers dedicated care to abandoned and ill-treated domestic and farm animals.

Willows helps many vulnerable people with its animal assisted therapy programme. The concept of allowing rescued animals to help vulnerable people on the road back to health is very innovative and has been independently evaluated and shown to be highly beneficial.

For more Information on Willows and how to make a donation See: http://www.willowsanimals.com/