An Aberdeen defeat at Parkhead is hardly unpredictable – it’s seemed like the Dons couldn’t buy a win against Celtic in recent years, not that they’d have to finance to do so – but at least the team are down to battling, one-goal margins now rather than the capitulations of last season. Philip Sim reports.

The Dons scored their first away goal of the season in this match, another little milestone in the crawl towards progress for Craig Brown’s side, who look to have a bit of confidence and fight about them after back to back home wins against Dunfermline and Dundee United.
Two things always seem certain when the men in red play against the hoops though – one of them will be sent off, usually controversially, and Charlie Mulgrew will score or create a goal to haunt his old club. The former Dons full-back often looks shaky during open play, but his set-pieces and surprising ability in the air have been invaluable to Celtic this term, which is perhaps why he was handed the captain’s armband for this match.

Wonderkid Ryan Jack went from hero to villain for the Dons, scoring an excellent solo goal to level the match before being sent off for a second yellow card.

Jack has really come into his own this season and for the most part his performance at Parkhead reflected this, but his dismissal ended the game as a contest.

Prior to that chances had really been at a premium, with both sides working hard to restrict opportunities for their opponents. Celtic had the lion’s share of the play, but Aberdeen were always in the game, fighting hard for every 50-50 ball and showing total commitment across the defence and midfield.

Jack’s first booking was a farce – a goal celebration of any kind is now apparently a foul, or was it merely for having the temerity to score against Celtic? However, he showed his inexperience when lunging into the tackle which earned him his second. He will now be suspended for the next match, the visit of the other Old Firm cheek, which presents Craig Brown with a defensive dilemma.

One option is to make a straight swap and drop Chris Clark in at full-back. This would be the continuity option and possibly the best one, given how well the rest of the team are playing in their respective positions, but Clark’s form has been very poor since his return to the Dons, especially defensively.

Another straight-swap option would be Rory McArdle, but full-back is far from his preferred position.

Brown has shown an admirable resolve to stick with the starting 11 and formation which has been performing well of late, but he is a tinkerer at heart and he may be tempted to move things around a bit.

Kari Arnason has been deployed at centre-half in several big games this season. Might Brown be tempted to move him into defence, shifting Andy Considine to left-back and Foster to right-back?

Arnason has formed a formidable partnership with Isaac Osbourne in the middle of the park and many Dons fans will be eager to see the havoc they could wreack on a Rangers midfield this weekend. Arnason’s composure and reliability are a bonus wherever he is deployed, but these charactistics work best alongside the wrecking-ball style of Osbourne in the middle of the park. One thing is for sure, and that’s that the Aberdeen board need to find some cash to sign these two up to longer-term deals as soon as possible.

Similar to the midfield duo, the defensive partnership of Considine and Youl Mawene is also probably working too well to be broken up. The experience and toughness of Mawene seems to give Considine real confidence, with the big defender already having his best season in the team, and the two complement each other nicely.

Players like Mawene, Arnason and Osbourne – and indeed Rory Fallon and David Gonzalez – weren’t in the side for any of last season’s humblings against the Old Firm, which can only be a good thing. They approach these games full of confidence rather than trepadition, expecting to win, and with these five really representing the spine of the team this really boosts the morale and belief of their team-mates.

During the latter years of the Jimmy Calderwood era Aberdeeen had an excellent home record against Rangers, winning almost every game, and the way the Dons are playing right now, there’s every chance that can be re-established again this weekend.

A Scott Vernon hat-trick sent Aberdeen on the way to doubling their SPL goal tally for the season, and in truth the Dons could and should have scored more as they finally clicked in the final third. Vernon’s main challenger for the man of the match award was Pars goalkeeper Paul Gallacher, who pulled off a string of fantastic saves to keep the score down. In addition to his saves the home side hit the woodwork four times and Rory Fallon missed an open goal. Philip Sim reports from Pittodrie. 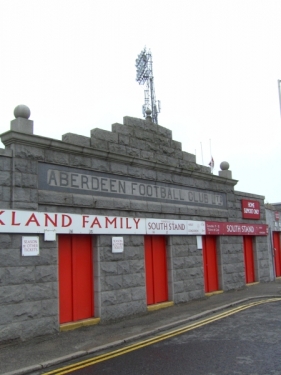 At long last, Aberdeen looked hungry for goals and showed a more ruthless up front. Many pundits have claimed Vernon and Rory Fallon are too similar to play together, but they showed in this game that they can operate effectively as a partnership.

Fallon is a traditional target man, winning flicks and holding the ball up, whilst Vernon, freed of this responsiblity, is allowed to play in his preferred role facing the goal.
After his first goal he was also playing with real confidence, and looked a completely different player to the isolated and frustrated Vernon of a few weeks ago.

The whole team seemed buoyed by the goals,  Rob Milsom and Fraser Fyvie in particular each having their best game of the season.

Milsom was everywhere, buzzing about making passes and penetrating runs, and he was denied the goal his performance deserved by another fine Gallacher save.

The foundation for the win was in the midfield – Kari Arnason and Isaac Osbourne ran Dunfermline ragged, winning every ball in the air and on the deck, giving Milsom and Fyvie more freedom to push forward and create. Dunfermline actually started the game with a five-man midfield, but were so beleaguered from the outset that holding midfielder Andy Dowie was substituted in the first half.

On the rare occasion that the ball made it past the midfield, Andy Considine and Youl Mawene dealt with the threat easily. Considine has really come into his own this season, perhaps thanks to having the composed, experienced head of Mawene next to him.

Mawene and Considine for the most part managed the defence on their own, allowing full-backs Ryan Jack and Ricky Foster to go forward almost constantly on the overlap. Their pace and drive added much-needed width to the side, in support of the central midfielders, Milsom and Fyvie, deployed on the wings.

Foster had an excellent game. Hopefully this performance – combined with the defeats against East Fife and Motherwell – will have convinced Craig Brown that he needs to use his captain at the left full-back position rather than further up the field. Foster is so quick he can be an attacking player even while covering the defence at full-back, and he plays by far his best football from there.

In fact, the same could go for the entire line-up. At last, players were deployed roughly in their proper positions, and it showed. The Dons looked far more comfortable than they have in any game this season, and it seems like after weeks of chopping and changing, Brown has found his best eleven.

One swallow does might make a summer, but this could be the turning point Aberdeen’s season has been waiting for. A free-scoring, morale-boosting win – the only downside is that it has come right before an international break, leaving the team with no chance to build momentum.

By contrast, Dunfermline enjoyed a good start to the season, but reality is starting to set in for the Fifers. Jim McIntyre has built a solid team of experienced pros, with very little reliance on youth or unknown quantities, which should be able compete in a fairly even SPL. As it stands, there are only two points between the sides in the bottom six, and only seven between fourth place and last.

As it is Aberdeen sit ninth, but will take a massive confidence boost from this win and are only one win away from the top six. At times this season they haven’t got the results their performances have merited, but against Dunfermline everything finally came together. The Red Army will be wondering if their side can’t play on a Friday night every week.