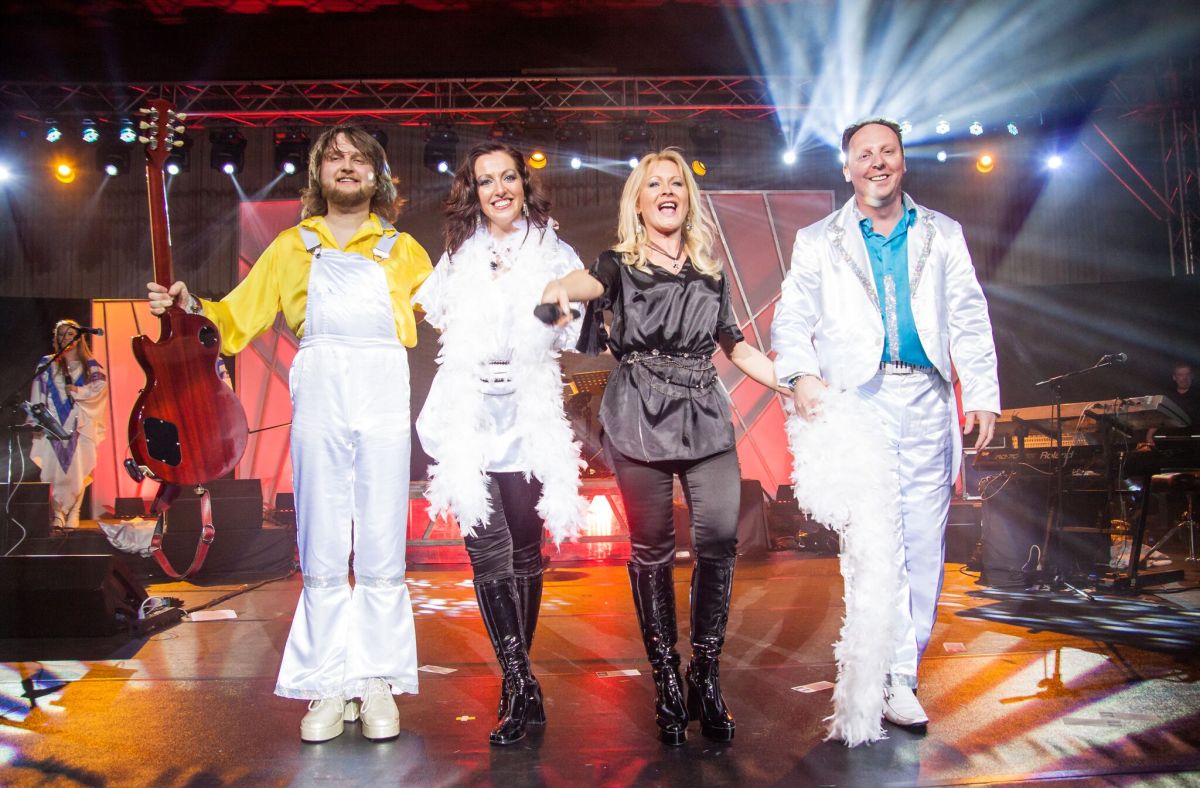 With over 40,000 different types of plants in bloom this summer, Pitmedden Garden is more than used to hosting colourful spectacles.

But nothing could prepare the historic country house for the vivid display of lycra and sequins worn by ABBAMANIA – the world’s longest-running ABBA tribute concert.

As classic hits like Waterloo and Dancing Queen ring out from the stage and the scent of honeysuckle and jasmine wafts through the air, the captivating show on Saturday, July 29 will be a true assault on the senses.

The elegant renaissance garden in Aberdeenshire, which is now managed by the National Trust for Scotland, will be one of the more unusual venues that ABBAMANIA has graced.

However, it’s a stage that the band members have been looking forward to all summer – and one which they believe the original line-up of Agnetha Fältskog, Björn Ulvaeus, Benny Andersson, and Anni-Frid Lyngsta would have loved.

Scots singer Sharon Fehlberg – who has the alter ego of Anni-Frid – says,

“We have performed there once before and it is an absolutely fantastic venue. We were lucky enough to have beautiful weather, so fingers crossed the sun will shine for us again.

“People still love the music of ABBA after all these years because they created timeless pop songs. You just don’t get music like that now.

“The film and stage show Mamma Mia has introduced a new generation to their music, but we have always seen people of different ages in our audience, from five-year-olds to grandparents.

“We love playing in the north because audiences get so into it. The audience reaction is always the same – no matter what the age, they want to have fun and enjoy listening to great music. That kind of enthusiasm lights up the whole place, and as a performer that feeling is amazing.”

ABBAMANIA features the Eurovision winners’ most memorable hits from Winner Takes It All to Take A Chance. The group, which also includes Ewa Scott, Adam Robertson and Steven Galet, focuses on recreating ABBA gigs as audiences would have seen them in the 1970s.

That means that, unlike other tribute acts, there are not scores of backing dancers and complex dance routines. The ABBAMANIA show brings the energy of the performance, but focuses on vocals, musicianship and musical arrangements.

It’s an approach that has resulted in the act, which has been going since 1999, touring all over the UK, Europe and the Philippines, and a trip to the States is also on the cards for 2018. 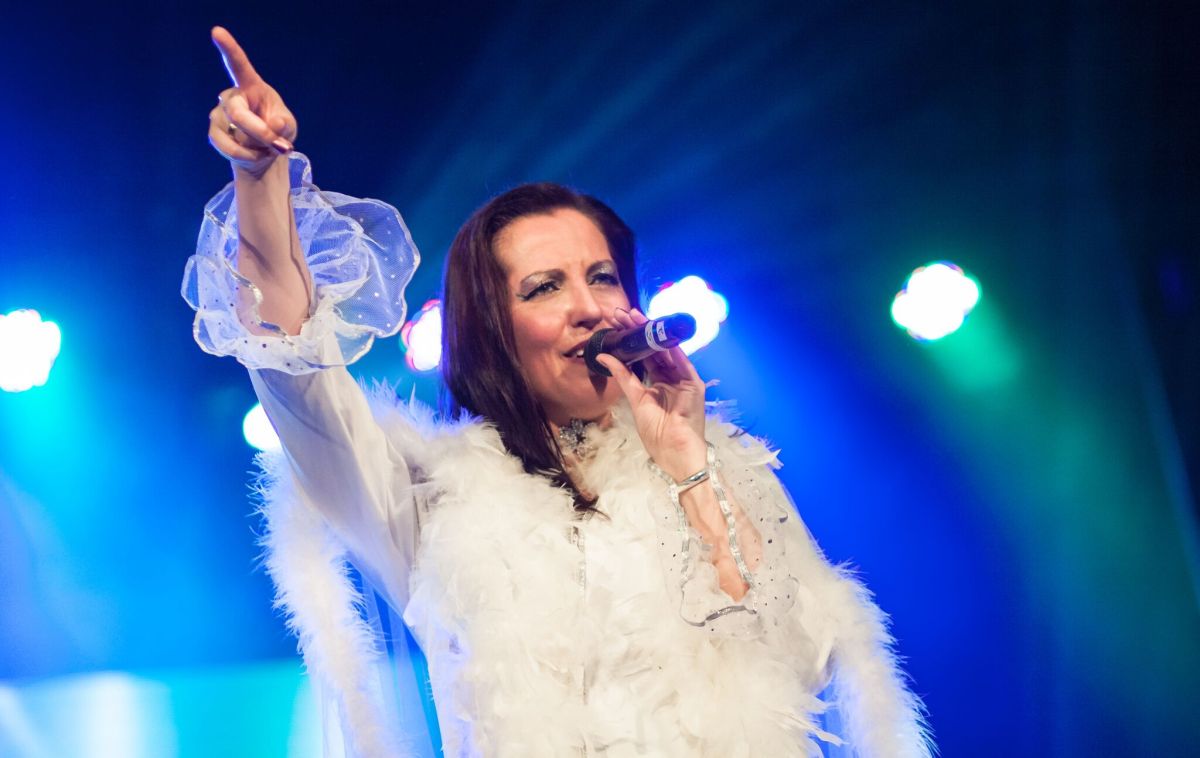 Sharon (36) joined ABBAMANIA four-and-a-half years ago after fending off competition from dozens of other hopefuls at an open audition.

She was writing dance music in the studio at the time, but never regrets her decision to don catsuits and capes every weekend.

Some might say that she was destined for a career in showbusiness. Her father is a musician and her mother – Lorraine – was lead singer in the 1970s pop group Middle of the Road, best known for their hit Chirpy Chirpy Cheep Cheep.

She was just three-years-old when she entered a recording studio for the first time, and spent much of her childhood on the road touring with her mum when she was not at school.

“Music is in my bones and I knew the very first time that I put a microphone in my hand that I wanted to sing. I never thought of doing anything else.

“However, the music business is very, very tough. My mum was quite well known but that meant nothing: I’ve had a lot of doors slammed in my face and a lot of disappointments over the years.

“But eventually your time comes and I was over the moon to join ABBAMANIA. It’s like a dream come true and I have loved every minute of it. I’ve always been a fan of their music, probably because I grew up around that European poppy harmony sound.

“My favourite ABBA song, ever since I was a little girl, is Dancing Queen. It is such a feel-good song and I never get bored singing it. Audiences love it, and it’s amazing to look out and see people enjoying themselves, singing along and dancing.”

ABBAMANIA at Pitmedden Gardens is one of a range of special events being held by the National Trust for Scotland, the country’s largest conservation charity, at its properties over the summer months.

Pitmedden Gardens is an outstanding example of a Scottish renaissance garden and the parterres at its heart are a masterpiece of intricate patterns and colour. It also has six miles of clipped boxed hedging.

The original garden was built in 1675, and it was recreated by the National Trust for Scotland in the 1950s based on designs found at the Palace of Holyrood House in Edinburgh.

Fancy dress is, of course, optional at the ABBAMANIA show, but all are advised to dress warmly. Audience members are encouraged to take a picnic and a rug – or low seating – and some marquee seating is also available.

Tickets are priced £12.50 for adults and £6.50 for children, and are available at www.nts.org.uk. Gates open at 6pm with the show getting underway at 7pm.

The National Trust for Scotland is the charity that celebrates and protects Scotland’s heritage. It relies on the support of its members and donors to carry out its important work of caring for the natural and built heritage of Scotland for everyone to enjoy.

You can join the National Trust for Scotland for as little as £7.50 per month for a family. To become a member, visit http://www.nts.org.uk/Join/Benefits/.

You can make a difference and help protect everything in our care. Donate online at https://www.nts.org.uk/Donations/