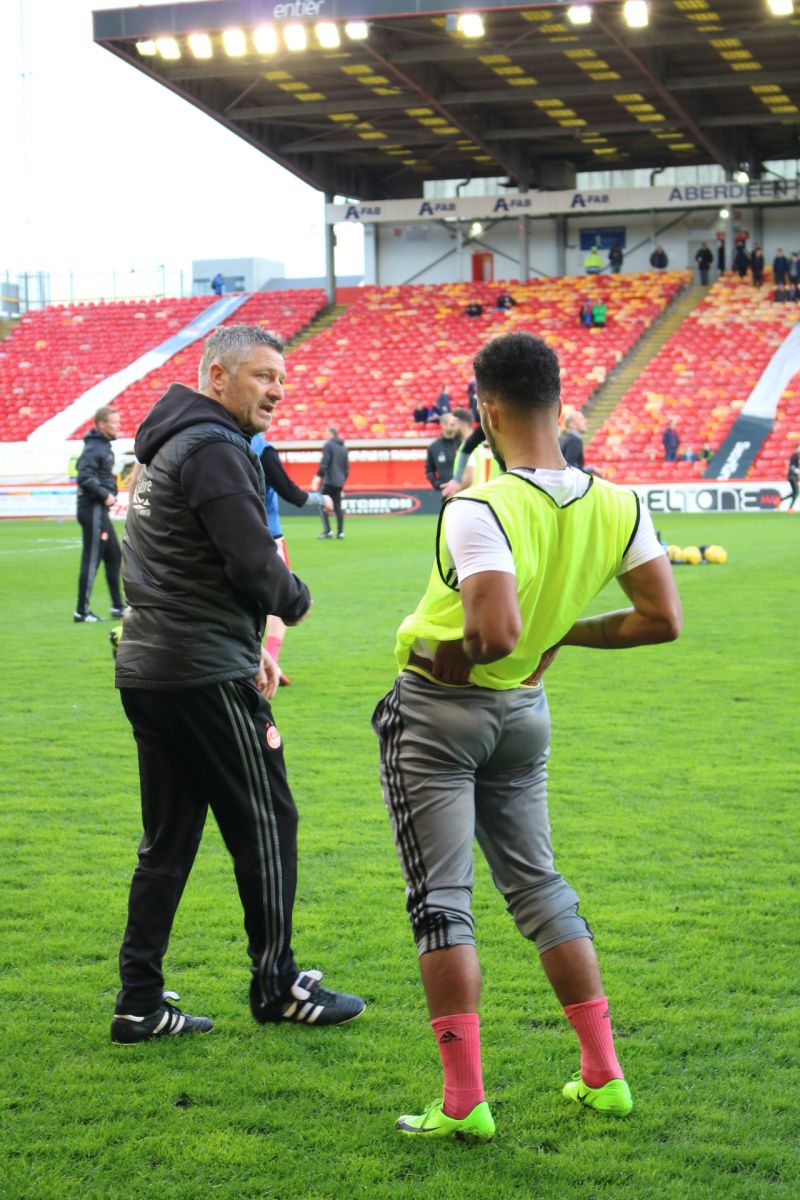 A crowd of around 11,500 people, including 174 from Inverness, saw referee Andrew Dallas get this evening game underway, and an unchanged Aberdeen team were looking for their tenth home victory in a row.

Starting positively, Jonny Hayes burst down the left wing, saw Niall McGinn inside the opposition’s box and fired an inch perfect ball into him.

The number 10’s attempt was on target, but was destined to count for nothing as the Main Stand linesman waved for an offside.

The Dons were determined to continue where they left off on Friday, by playing at a great pace and fighting for every ball.

The next move saw man of the moment, Kenny McLean, fire a great ball into the feet of McGinn who was ready and willing in front of the goal. But the Inverness captain, Gary Warren had other ideas and stole the ball right off him a mere 3 yards in front of the net.

Minutes later McGinn was the provider from the same left side, but keeper, Owain Fon Williams managed to get his fingers to the ball, which fell, fortunately, just beyond Adam Rooney.

With 11 minutes gone, Aberdeen were keeping the pressure up, and some fine passing from Hayes to McLean and back to Hayes, then into McGinn, whose head flick was saved by the keeper.

Next, a Graeme Shinnie shot from just outside the box went wide.

The home side were awarded their first corner in the 12th minute of this so far, action past game.

McLean was on fire, running the midfield and appearing all over the field pitching in. Inverness were working hard to stop the Dons from running rampant, and were making a better fist of it than Dundee did.

Working his way down the left side, McLean was brought down by Henri Anier, resulting in the first free kick of the match just inside the visitor’s half.

Shinnie picked the ball up around half way and started a great run towards the Merkland Stand, culminating in a super shot from about 30 yards out, but the only reward from this great play was a corner. Hayes took the corner finding Friday’s hat-trick hero, Andrew Considine, who fired the ball in for Ash Taylor who made certain by striking the ball into the back of the net to open the scoring on the 22nd minute.

A short time later, the defender attempted one of his accurate long passes towards Shinnie who was lurking at the far edge of the goal area, but the ball ended up going out for a Caley goal kick.

In the 33rd minute, Hayes tried a running chip shot, gaining yet another corner from which Taylor, who was having a good game, headed just wide. With around ten minutes left of the first half to play, the referee issued the first booking of this competitive match when Billy McKay deliberately pulled back Considine.

Just before the end of the first 45 minutes, Hayes had another super breakaway before finding McGinn with the pass. McGinn in turn passed brilliantly to McLean who was running in to collect it. The net result, however, was a corner, which turned out to be the last action of the first 45.

With neither side opting to make any half time changes, Aberdeen had been awarded a throw in and a corner within the first 2 minutes of the restart. From the corner Considine got his head to the ball, but could only head the ball down and out to give the visitors possession.

Shay Logan was the next player to execute a great move, by making good run before putting a fine ball in to captain Ryan Jack who then passed to McLean. McLean was desperate to score, but could only put the ball wide.

Jack then showed some wonderful strength in midfield by holding onto the ball despite numerous tough challenges and severe physical pressure from several players. Aberdeen were then awarded a free kick around 30 yards out, but McLean made a hash of it.

Manager, Richie Foran must have had some harsh words to say to his team at half time, because Inverness were playing much better in this second half. Nevertheless, they barely troubled the home defence, despite having some talented players in their side such as Greg Tansey, who will be joining Aberdeen in the summer, and the other paying his first visit as a player to his old club, Kevin McNaughton.

The pitch, not in great shape at the best of times, was cutting up more and more, making silky play all but impossible. Still, Aberdeen kept trying to add to their tally, but to no avail.

With ten minutes left of the action, Derek McInnes decided to take off McGinn and Rooney and replace them with Ryan Christie and ex Inverness loan player, Miles Storey. It was the latter who messed up the perfect opportunity to put the game to bed. Hayes fired in the perfect ball to him as he was standing, virtually unattended on the goal line, only to get the ball trapped beneath his feet. Frustrating and puzzling to say the least.

Even with three minutes of stoppage time added, The Dons couldn’t score a second, and when the final whistle was blown Aberdeen were content to secure yet another clean sheet and, more importantly, 12 points ahead of The Rangers in second place