The second of three consecutive league matches at Pittodrie, saw St Johnstone make the short trip up from Perth. The Dons were hoping to continue the good showing from last Tuesday, but St Johnstone, a top six club, are a tougher nut to crack. By Red Fin Hall. 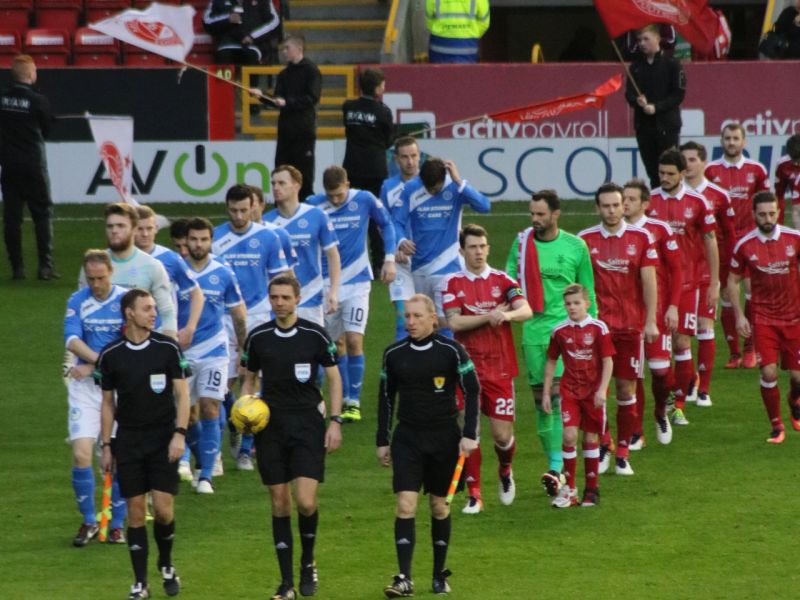 With Ryan Jack back from his one game, red card suspension, the manager made the strange decision to give him a start whilst leaving the ever present Shay Logan on the bench.

Jack slotted into right back, a position he played when he first came into the team. Peter Pawlett retained his place.

Referee Kevin Clancy got the game under way in front of a relatively small crowd at Pittodrie. 3 home games in the space of three weeks, especially at this time of year, and considering the economic climate, it can only be expected.

St Johnstone aren’t a great team, and probably would not survive anywhere else other than in Scotland, but their manager, Tommy Wright, sets them up, not to play football as a beautiful game, but to only make things difficult for their opponents. This they do well, hence their continuous top six position.

Within the first two minutes the home side were awarded their first free kick, which, when taken, went off the defensive wall and out of play.

In the 7th minute a cross, if that’s what it was, from Jonny Hayes went wide. Thus was a portend of things to come as the Dons, under challenges from the visitors, kept, through a series of mis-kicks and careless calls, losing possession.

The men from Perth were awarded their first free kick in 10 minutes, the resultant clearance from Graeme Shinnie fell to Hayes, who immediately lost possession. This was going to be a long afternoon.

The midfield battle was definitely going St Johnston’s way, as they closed Aberdeen down , but the men in red seemed content to back off.

The next Aberdeen player to appear uncomfortable was Jack, when he was dispossessed on the half way line. He won the ball back, but had to play it safe, and passed it all the way back to Joe Lewis in goal.

With 29 minutes in the clock, St Johnstone’s Murray Davidson had a touch go just wide. His team were having another spell of dominance.
One minute later, the Dons had some nice interplay, but Pawlett’s shot only resulted in a corner. From the corner Andrew Considine’s strong header went over.

On receiving a long pass, ex Don Ricky Foster set off on a run, but typical of the game, he ran the ball out for an Aberdeen goal kick.

Pawlett looked back to his old tricky self

Despite not being able to make any headway against the well drilled opposition, the Dons at least, on occasion, tried to play football.

Some nice play between Shinnie and Hayes, the latter not having one of his better games, ended up with Hayes hitting the ball a too long, which fortuitously found Nial McGinn. His pass to Shinnie was turned out for a thrown in. Recipient of the throw, McLean, wasted it by tapping it out for a goal kick.

Pawlett looked back to his old tricky self, when his shot from just outside the D went wide.

St Johnstone were dragging the Dons to playing the way they wanted too, and Aberdeen didn’t have enough savvy to stop them doing this. James Maddison, despite trying to utilise his obvious skills, was too easily knocked off his stride. Sometimes winning a foul, others by just bring you lightweight.

Neither side looked like they could find a way to put the ball into their opponents’ net; St Johnstone seemingly happy to accept a point, and AFC not having enough guile to find a way through.

The referee blew for half time as the home team made a rare foray into the goal mouth, but Pawlett’s shot troubled no-one.

Two second half a subs for Aberdeen saw Jayden Stockley and Shay Logan replace Pawlett and McGinn. The team then played a 4-4-2 formation to try and win the match.
But with Hayes not up to his usual high standard, and McGinn having yet another off form game before he went off, the end result was always going to be a goal less draw.

Despite Aberdeen stepping up the pace around the hour mark, and winning several set pieces, they all followed the pattern of most of the set pieces this season.

Joe Lewis had to be really sharp and pull off a fabulous save from a Steve MacLean shot, tipping it over the bar. Barring a great strike in the 87th minute from a David Wotherspoon free kick, which came off the inside of the near post, the ball stayed out, and the final six minutes, including three minutes stoppage time, petered out.

The fans went home feeling that a draw was maybe just about right, but the home fans were disappointed that the players didn’t manage to get a lot closer to The Rangers in second place.