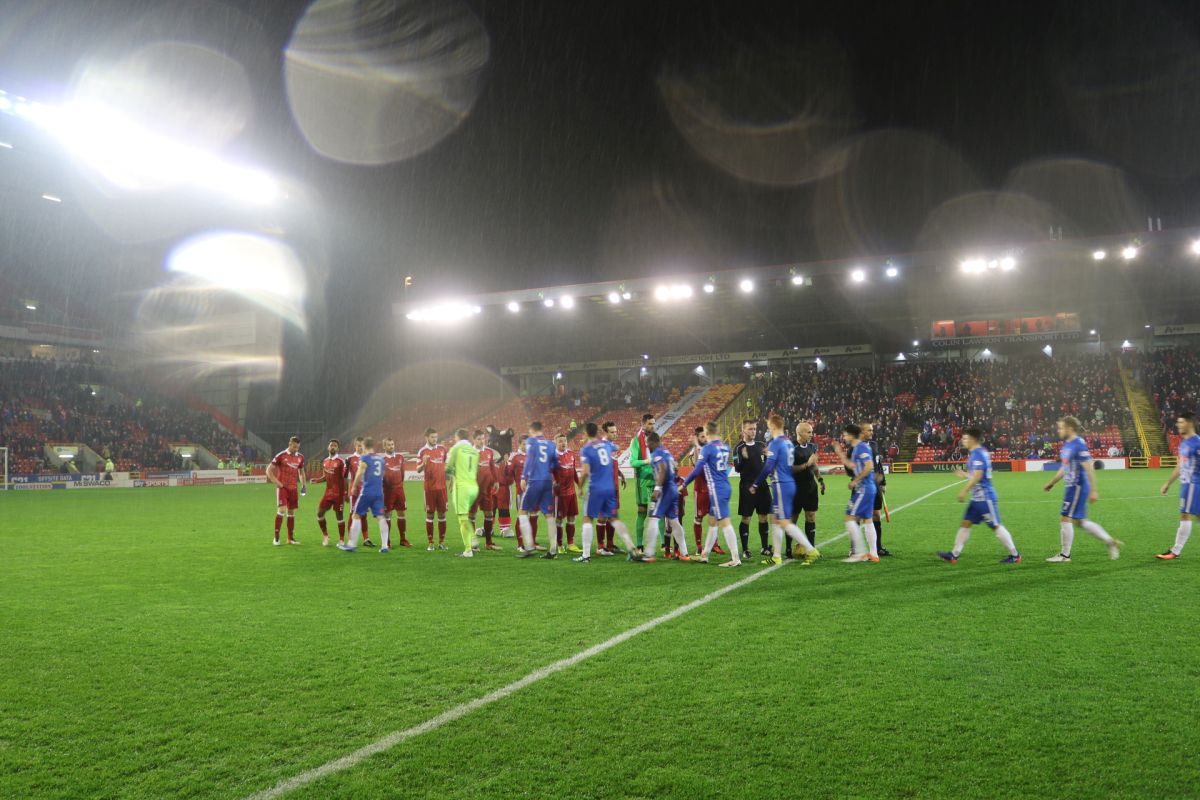 League business returned to Pittodrie on a wet and dismal
evening.

8,195 supporters turned up, most of whom were hoping to see a vast improvement in the performances of the last two games.

There were a couple of changes in the lineup, with Peter Pawlett making his first start for ages, and Niall McGinn also starting the game.

The Dons started off very sharp as within the first couple of minutes, first Graeme Shinnie then Jonny Hayes breaking down the left wing, and the home team winning three free kicks and a corner in the first 8 minutes. The visitors were giving a reasonable account of themselves, with a couple weeks of attacks , around ten minutes.

All this changed in twenty minutes, with Aberdeen in control, Shinnie hit a sweet shot from just outside the box, a shot that keeper Jamie Mac Donald may have managed to get a hand to were it not for Pawlett sticking out a foot and deflecting the ball past him and into the net.

The Dons were playing some bonny stuff and playing it with confidence, epitomised when McGinn received a fine ball from Adam Rooney, but its acute angle shot was cut out by the Killie defence .

With 25 minutes gone, referee Stephen Finnie booked James Maddison for diving right on the edge of the Kille box. There seemed to be no argument from the young man.

Number 16, Pawlett, was repaying his manager’s faith in giving him a start, by putting his fast and tricky style to good use, making the Killie players work hard.

There followed a claim for a penalty when a Shay Logan touch came off the hand of a defender. It would have been a soft one if it had been given.

Keeping the pressure up, a Pawlett shot was knocked in at the back post by Anthony O’Connor for Aberdeen’s second goal in the 30th minute. It was also his second for the club.

Killie weren’t lying down, and a long shot in was easily cleared by O’Connor. There followed a great solo run by Hayes, after a pass from AdamRooney, when he cut past the Ayrshire men’s defence and slotted the ball in at a tight, low angle at the near post. So with five minutes left of the first half it was 3-0 – and deservedly so.

The Dons were still trying to score more, with a Maddison shot, after a pass from Hayes, going well over. Aberdeen’s second yellow card was given to Andrew Considine for delivery obstruction. The team as a whole was showing more fight and strength than they did in the last couple of games.

Just before the break Rooney was tripped while heading for goal, but the ref waved play on.

Kilmarnock made two substitutions at the start of the second half when Iain Wilson replaced Jordan Jones and Nathan Tyson coming on for Adam Frizzell.

Five minutes into the second half Aberdeen carried on where they left off before the break, when McGinn shot over from the right side. The fans were certainly enjoying the display that the players were giving.

McLean escaped a booking for speaking out of turn after Killie were awarded a free kick in their own goalmouth. He instead was given a long and stern talking too. Pawlett had to go off for a minute at this incident due to taking my a knock.

Derek McInnes decided to take off Maddison and replace him with Mark Reynolds in the 54th minute.

McGinn set off on a cross field run, he passed the ball to Hayes who was coming in from the left. His shot was easily dealt with. The midfield were linking well, with McGinn back to his best, exemplified by another good cross from the left just to high for Pawlett, and cleared by the Killie defence.

Kenny McLean is more involved than in previous games.

63 minutes in, a corner was taken by McGinn who controlled the return ball wonderfully, but woefully skied the ball over. A few moments later, Logan fed a long cross field pass to Rooney whose first touch was classy. Sadly his second touch was not.

In the 67th minute a fine flick on header from Considine to McGinn only ended up with Killie making a break away, but the finishing shot by Tyson was well over.

McGinn added a well deserved fourth goal when his left footed shot went in at the right corner.

Pawlett was the next player to be substituted when he was replaced by Wes Burns. The substitute picked the ball up in his own half and runs into the opposition goal mouth, passes to McGinn, whose shot went over. Kilmarnock made their final change when Charlie Adams came on for Souleymane Coulibaly.

Rooney then beat the offside trap and tried to chip the keeper, but is was well saved for another corner to the home club.

The visitors got a consolation goal when, in the 77th minute, McKenzie, with an assist from Tyson, put the ball past Joe Lewis.

Rooney became the last change for Aberdeen, when Jayden Stockley replaced him.

With 10 minutes to go, Reynolds conceded a soft foul on the edge of his own box, but the resultant free kick came to nothing.

The Dons were not sitting back, and were trying to get a fifth goal. This came along with just a few minutes left to play, when after more good play from the Dons, was finished off by Hayes when he nipped in front of the keeper for his second of the evening. Needless to say he was named Man Of The Match, although nobody could argue if several others were given the title.

The one minute stoppage time awarded was of little consequence, and when the final whistle did blow, Aberdeen moved back up to third place in the league on goal difference over Hearts.

A deluge of rain and a deluge of goals under floodlights. Scottish Football as it should be.