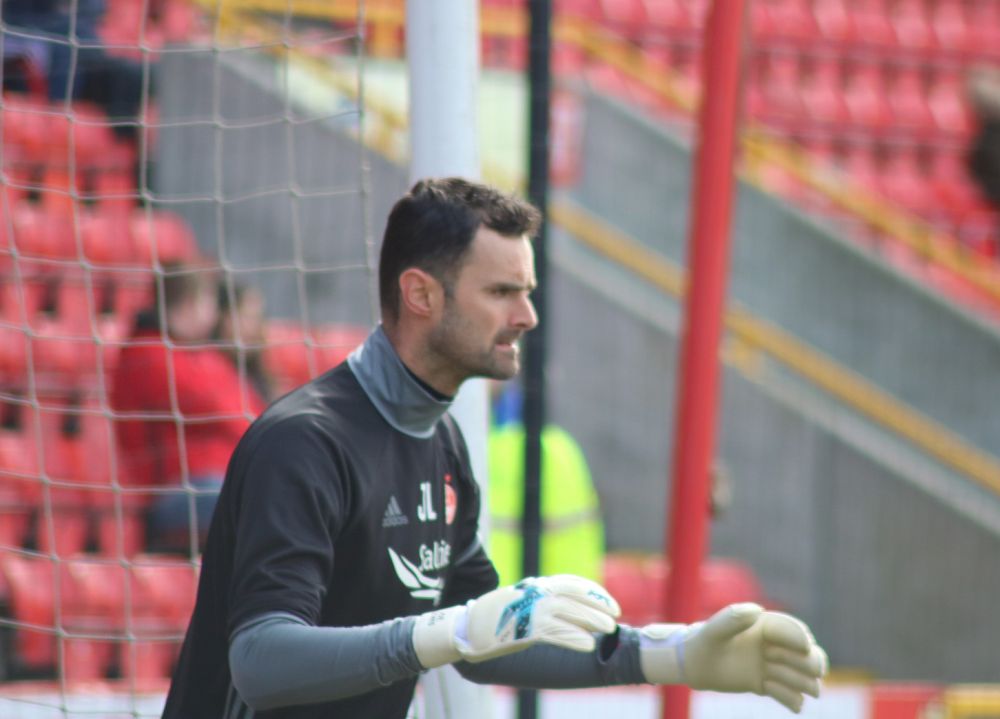 The match against ‘they who were once contenders’ before Robbie Neilson jumped ship to go to MK. Dons and the young statistician took over, was a game where nothing short of a Dons win would suffice; not just to make it nine home wins in a row, but to rectify a poor recent record of results versus Hearts.

Aberdeen reverted back to the usual suspects in the team fielded, with Mark Reynolds still out injured, Anthony O’Connor retaining his place, and Jayden Stockley back on the bench.

It was a fine but sunny-ish day, with the rain, thankfully, staying off. Hearts won the toss, and decided to kick off towards the Merkland Stand. The match referee was Steven McLean.

The Dons started off in a positive manner, winning two corner kicks in the first minute. Hearts got theirs five minutes in when O’Connor and Esmael Goncalves were involved in the first real tackle of the game.

8 minutes in the home team were awarded their 2nd free kick, a pattern which was set for the whole of the game.

Kenny McLean continued on from the last game, being involved in almost everything that happened on every part of the field. However, he was an unwilling participant in the first booking of the game, when he was chopped down by Alexander Tziolis.

Aberdeen were well at the top of their game, and even this early in the proceedings there was some pretty fine football being played. But, Hearts being Hearts, they interspersed trying to make a game of it with their trademark fouling.

Aberdeen were nearly hit with a sucker punch as the visitors progressed upfield, but some calm defending meant that the shot from Arnaud Djoum never troubled Joe Lewis, and the ball sailed over the bar for a goal kick.

Leonard Sowah was the next player to concede a free kick for a foul on Ryan Jack.

With 23 minutes elapsed we saw the best move of the game when Andrew Considine and Niall McGinn showed some skill in passing and possession, with the latter firing a perfect cross from the left side into the 18 yard area to find Shay Logan running across the front of goal and heading the ball into the back of the net.

McGinn was the executor of the next chance a mere 4 minutes later when he fired a good ball in for Adam Rooney. Rooney couldn’t quite make contact with it and it fell perfectly for Graeme Shinnie. Alas, the best we could get was a corner, which, when taken was too long for anybody.

Next, left back Considine passed forward an almost perfect ball for Hayes, but he wasn’t expecting it and failed to control it.

Hearts found themselves having the ball for a good bit of play until their work was broken up by McLean, who was then fouled for his trouble.

Playing to his usual high standard, Shinnie collected the ball on the edge of the opposition box, turned swiftly and chipped the ball in.

It went over the bar though.

The Dons were a joy to watch, and the goal had obviously knocked the stuffing out of the men from Edinburgh, with Goncalves seemingly giving up on chasing loose balls down to easily.

Meanwhile, McGinn showed again why there may be top clubs after him in the summer, when he aimed for Rooney with a superb ball in from the sideline. The Irish striker was just unable to reach it. Still looking dangerous though.

Sam Nicholson, despite not having a game of the standard you might expect from him, tried running at the Dons defence looking for an equaliser before half time, but his finish was poor and the ball was inches away from clearing the roof of The Merkland Stand.

Just on half time Hearts had another possible goal failing by poor shooting, this time by Goncalves. It wouldn’t have mattered anyway, as the player was adjudged to be offside, although he didn’t know it at the time.

The second half kicked off with The Dons attacking, and within the first 2 minutes Rooney had the ball in the net, but the whistle had been blown for offside.

57 minutes had passed when Logan took a throw in to Hayes, who passed to McLean who is not shot shy, but couldn’t find the second goal.

Don Cowie, the Hearts captain was booked for a foul on McLean. The free kick went no further than the wall though.

There next followed a catalogue of errors by Hearts starting off when McLean stole the ball off a Hearts player in midfield, but then after getting it back, the Dons forced a slack pass back from Anastasios Avlonitis. Before Hearts’ keeper Jack Hamilton could get to the ball, Jonny Hayes nipped in and collected it.

The keeper made a timing error when he dived at the feet of the onrushing Hayes, missing both the ball and the attacker, making it easy for him to kick the ball into an empty net.

The second half continued in such a fashion, with the Dons pushing high upfield and Hearts fouling, mainly McLean, with Jamie Walker getting a yellow card for doing so just after 80 minutes had passed.

Just before that, however, Rooney was substituted and Jayden Stockley came on. The tall forward is more often than not, proven to have a crucial effect on games when he comes off the bench. Today was no different, but time it wasn’t so good. The Hearts players couldn’t quite handle him, and as he tried to break upfield with minutes left to play Krystian Novak, in an attempt to stop him, was pulling him back.

None of the officials saw this, but they did see Stockley foolishly react by swiping back at the player with his hand, making contact with Novak’s face. The Hearts player, unsurprisingly, went down over dramatically. The Dons player was correctly shown a straight red card for his part in the incident.

Dying the time that Novak was being treated for the gentle tap on the face he received, both Shinnie and Hearts substitute, Malaury Martin, were yellow carded for pushing and shoving like petulant schoolboys.

Ryan Christie and Frank Ross both got very minimal run-outs in the last few minutes. The fourth official indicated that three minutes stoppage time would be played, which passed without further incident. The full time whistle went, and Man Of The Match, Kenny McLean must continue to ponder what he has to do to get back into the Scotland squad.

Next game is away to Dundee on the last day of the month, before Inverness Caledonian Thistle pay a visit on 4th April.