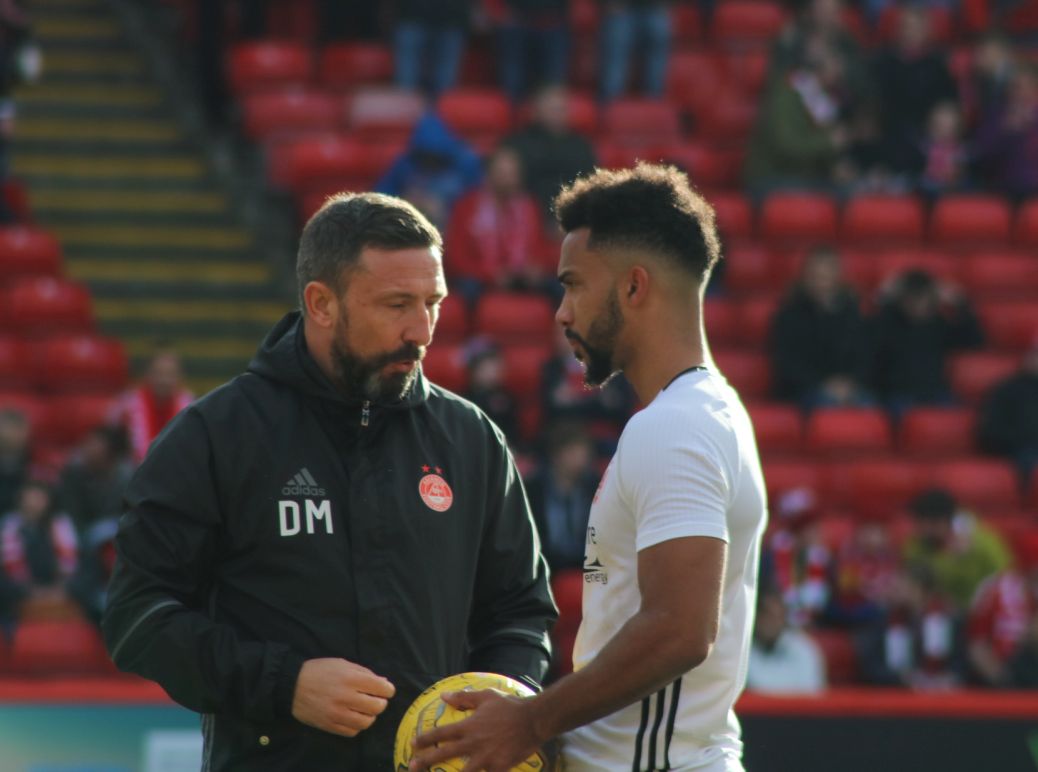 It only seems like a few weeks ago that we played Ross County in the Scottish Cup, well funnily enough it was.
That hard fought game is sure to be replicated today.

The last time we played them here, the Dons finished with a 4-0 victory.

Aberdeen’s starting line up was their strongest one – the same players who started the eight game run before Graeme Shinnie was suspended.

It was a glorious and sunny day, but the pitch was anything but ideal when referee, Willie Collum, got the game underway with the visitors kicking off.

Couple of moments into the game when Shay Logan crumbled when bundled to the ground by a Ross County player. A throw in was given.

Great attacking play from the Dons followed when Logan and Hayes linked well, with the latter juggling the ball in the opposition box before utilising an overhead kick to Adam Rooney who couldn’t get high enough to get much purchase on the ball, which went straight into Scott Fox’s arms.

Ross County, playing 5 at the back, we’re working hard as the home team had attempt after attempt, including a chip in by Shinnie, which was easily held by Fox.

Aberdeen, whilst not playing at their best, were intent on trying to get the opening goal, County, were sticking well to their task and thwarting them.

The first booking came in the 22nd minute when Michael Gardyne had his name entered in the referees, book for a foul on Kenny McLean.  A minute later, Dons were another free kick a on the other side of the park which was taken by McGinn, but he totally wasted it and it ended up going for a throw in to the visitors.

A call for a penalty was, rightly, ignored by Collum, when McLean went down in the box.

In the 24th minute County were awarded their first corner, but thankfully, nobody was sharp enough to stick a foot out and it went behind for a goal kick.

Mark Reynolds was the next player to be booked when he fouled Alex Schalk, but when the free  kick was taken by ex Aberdeen player, Paul Quinn, it was totally wasted.

Aberdeen were finding it hard to get to the top of their game, as highlighted when a poor cross by Shinnie was easily intercepted by Gardyne. The Lightning start to the match where the fans were anticipating  a few goals, was replaced by hard graft and team work. They were however finding an out for every ball, as all the men in red were keen to get involved.

A sharp effort was equally matched by a sharp save by Lewis.

35 minutes had passed when Aberdeen were awarded a free kick just inside the opposition half facing towards the Merkland Stand. Taken by Hayes, the ball reached Reynolds who headed it forward to Rooney. His overhead kick however ended up security in the arms of Fox.

Never despairing despite the tight attention of the men from Dingwall, McLean was the next player to try and find away through the stuffy defence. But his fierce and low shot from 20 yards out forced Fox to dive and save.

County had their first real chance of the game when Jason Naismith beat Reynolds and his shot bobbled in front of Joe Lewis who held it at the second attempt.

With 5 minutes left of the first half, Hayes took a free kick on the left side, just 2 ft from the corner post. The goalkeeper punched it clear, and the ball was still in play, but the South Stand linesman had his flag up for offside.

Three minutes after that the ball was up in the Dons’ area and the Highlanders were awarded a free kick just on the edge of the 18 yard line. A sharp effort was equally matched by a sharp save by Lewis.

Just before the half time whistle went, Aberdeen should have been ahead. A fabulous long pass from captain Ryan Jack to Hayes, who shrugged off the challenge of Quinn. He then passed to the usually deadly Rooney, who found himself practically on his own in front of and open goal.

The simplest task to just tap it in seemed to allude him, and instead he fluffed the shot, and if contact was made, it must have been surely marginal, as the ball stopped just 18 inches the other side of him and was a sufficiently simple task for the defence to deal with.

The second half got underway with Ross County making a change, one that the stadium announcer failed to notify the crowd. Quinn was replaced by number 28, Kenny van der Weg, as manager, Jim Hamilton went to a more traditional four across the back.

It gave them a fair lift, as they started this last 45 much stronger looking.

Ever the master tactician, Derek McInnes decided it was time to make the first change

Although Hayes and Rooney were still a thorn in their side, the visitors were the first to try and break the deadlock just 3 minutes after the resumption of play when Schalk had a go from 25 yards out, forcing Lewis to make a decent save. Hayes was then penalised for tripping that same player shortly afterwards.

Although there wasn’t too much great quality on show, it was a busy game, with first Gardyne, then Hayes shooting wild and wide.

Ash Taylor, who is improving with every game, pulled off a crucial defensive header to cut out a cross from the County sub.

At this juncture the visitors were winning the midfield battle, and still crowding out the middle of the pitch, so something needed done.

Ever the master tactician, Derek McInnes decided it was time to make the first change. Jayden Stockley, the sub who has come on it the preceding two games and scored, was not available today. Whether the omission was tactical or as the result of a chest infection due to getting a draft when his shirt was ripped last week, I am unsure.

Anyway, Miles Storey was the player that came on. He replaced Mark Reynolds. Thus the team was altered to play three at the back, with Hayes and McGinn acting as attacking wing-backs. Storey added another option up front, and his pace was useful.

The Dons were awarded a corner in the 71st minute, and the determination of McLean in the aftermath of that set piece proved crucial. His determined play and his low powerful shot, coupled with slack defending from captain Andrew Davies, meant it was a simple task for Rooney to touch the ball into the net for his 17th goal of the season and, what ended up being the winner for Aberdeen.

That was the signal for Ross County to ring the changes, with Tim Chow and Craig Curran being substituted and Jim O’Brien and Milan Lalkovic taking to the field.

Shortly thereafter McGinn went off and Anthony O’Connor went straight into defence when he came on, and with only 4 minutes of regulation time remaining, Hayes was taken off and Peter Pawlett came on to help run the game down.

There were three minutes added on at the end, and the only thing of note was that Rooney made a good breakaway and slotted the ball to Storey, but his ball was high, wide and anything but handsome.

Next home game is the Scottish a Cup Quarter Final v Partick  Thistle on Sunday 5/02/17 when, incidentally, the latest edition of The Red Final goes on sale.
Before that however there is an away trip to Hamilton to contend with on Tuesday.