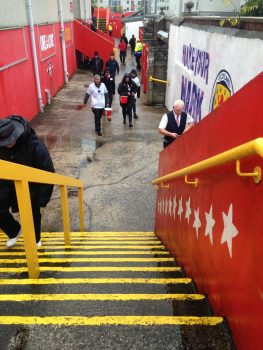 With the unnecessary distraction of the current joke that is international football, out of the way, it is the return of the real thing: League Football, and the visit of Ross County.

Since today was also National Grumpy Day, the fans were hoping that there would be little celebrating of that kind today.

The rain soaked pitch looked ideal for playing good football with the chance of sliding tackles after fifty yard runs. Oh, if only they were still allowed.

After both  teams took part in the Show Racism The Card display, if  that is the correct word for 22 players holding up a red card with those words written on it, referee Craig Thomson got the game underway.

Derek McCinnes played his strongest team, with Ryan Jack being the only player missing through injury.
Adam Rooney started as the sole striker; this week he was quoted as saying that the pressure for him to score is off due to the goals being  scored from all other positions in the team.

The game was only 7 minutes old when Aberdeen defender, Ash Taylor, had to be taken off due to an injury. His more than capable replacement was Mark Reynolds.

With 13 minute gone, a free kick taken by James Maddison found Rooney at the back post, whose header went into the goal. The celebrations were cut short due to the attacker being flagged offside. 2 minutes later another free kick from The Dons kept the pressure up.

In 17 minutes a corner from Niall McGinn was knocked just over the bar by  Maddison.

MgGinn was busy shortly afterwards, putting in a great cross from the right side of the pitch, only to see Rooney heading the ball just over.
In the 20th minute the inevitable happened. Jonny Hayes picked the ball up on the left, drove into the box and hammered the bell into the net. It may have taken a slight deflection, but it made no difference.

The action continued when Ross County defender, Tim Chow, starting his first game since he moved to the Black Isle, was given a straight red card for a two footed tackle on Hayes. There was little protest from the ex Wigan player.
Hayes was proving too much from the men from Dingwall. Running in from the right, he put in a good ball. The recipient, Andrew Considine, made good contact, but it was cut out by ex-Don, Paul Quinn.

In the 28th minute, a Maddison corner from the left found Rooney, whose downward header, although on target, was stopped on the line by keeper Scott Fox. This was the first many times he was called into action from a very busy Aberdeen side.
On the half hour mark there was another fine ball into the area from McGinn, this time Graham Shinnie was on hand to head it over.

Hayes hit the cross bar in the 41st minute from another free kick. This time from just outside the box on the right side.
The home fans were fair enjoying this game as every player in red was getting to the ball first, supporting each other and fighting to get possession. This became relevant when some nice interplay between Considine, Hayes and Maddison, resulted in the ever willing Shay Logan being on hand to get the final touch on 32 minutes to score goal number 2 of the afternoon.

Hayes again was busy, when he tried another shot at goal, this time from the right, but it was weak and went well past the post. Then a few monetary after that Rooney headed another ball straight into the hand is Fox. Hayes then saw another effort hit the crossbar in the 41st minute.

Just on the 44th minute, Aberdeen keeper, Joe Lewis pulled off a crucial, but non too difficult save in response to County’s first real effort on goal.
The visitors were on a slight roll as half-time beckoned the visiting team were awarded their first corner which came to nought, and, just as the whistle blew for half time, they hit the crossbar from a shot from about 25 yards out.

The second half continued in the same vein as the first 45, with a free kick awarded to The Dons in the 9th minute, but it was easily dealt with. Kenny McKean was involved in the next move of note, when he passed to Logan who beat his man then forced Fox to make another save. Relentless is the only word to describe the onslaught on the Ross County defence.

14 minutes into the second half, The Dons had another shot on target as the ebullient Irishman, Hayes crossed the ball to Considine who only had the keeper to thank (sic) for pulling off another save to stop him getting a third goal for the home team. Maddison then took another free kick, which troubled nobody as the ball went well wide.

The Highlanders then were awarded their second corner of the game; a move which ended with Aberdeen breaking upfield and the keeper picking the ball up from the feet of Rooney who was desperate to get on the score sheet.

Next came a dipping shot from the eventual man of the match, Logan, but it went just over the top of the goal.

The constant pressure continued and even a slip from Anthony O’Connor, when surrounded by County players, came to nothing but the home side moving back into the opposition half. Minutes later Maddison received a yellow card.

The fans were desperately waiting for the third goal to come, and in he 26th minute of the half, the waiting was over. Logan performed a great run downfield, put the ball into the box and McGinn was on hand to get the Don’s’ third goal, and his well deserved first.

In the 27th and 28th minutes of the game Hayes was at it again, first shooting straight at their keeper, then putting the goalie to work again saving another goalbound shot.

With 16 minutes left to play, Derek McInnes decided it was time to make a substitute, or, as he has been in the habit of doing this season, bringing on two. Rooney made way for Jayden Stockley, whilst McGinn was replaced by Peter Pawlett. The effect was seen immediately as Stockley’s first touch was to get on the end of a ball from a corner kick. He was unfortunate to see it go just over the crossbar.

Persistent play from the tall Englishman paid off when he made it 4-0 in the 36th minute.

It has been a long time since I have seen such a one sided game in The Dons’ favour at Pittodrie, and it showed no sign of letting up as Hayes led the way in causing the opposition problems. The pace and trickery of the game was not, as often happens, altering the flow of the game at all. As was evident three minutes after he scored, Stockley headed another ball towards the goalie.

There was still time for Hayes to have another go, this one going well over, and Maddison having one held by the hard pressed keeper.

Just as Craig Thomson blew the final whistle, Considine directed a cracking cross right across the front of the goal.

Aberdeen travel south to Hampden next Saturday for the League Cup semi-final against Greenock Morton, who, themselves had a good win today, beating Queen of the South 5-0.

Footnote. Due to typically bad and thoughtless planning by the SFA, Aberdeen Ladies play Celtic Ladies in the under 17’s Scottish Cup final next Saturday at more or less the same time as the aforementioned league cup semi. Their match will take place at Lesser Hampden.