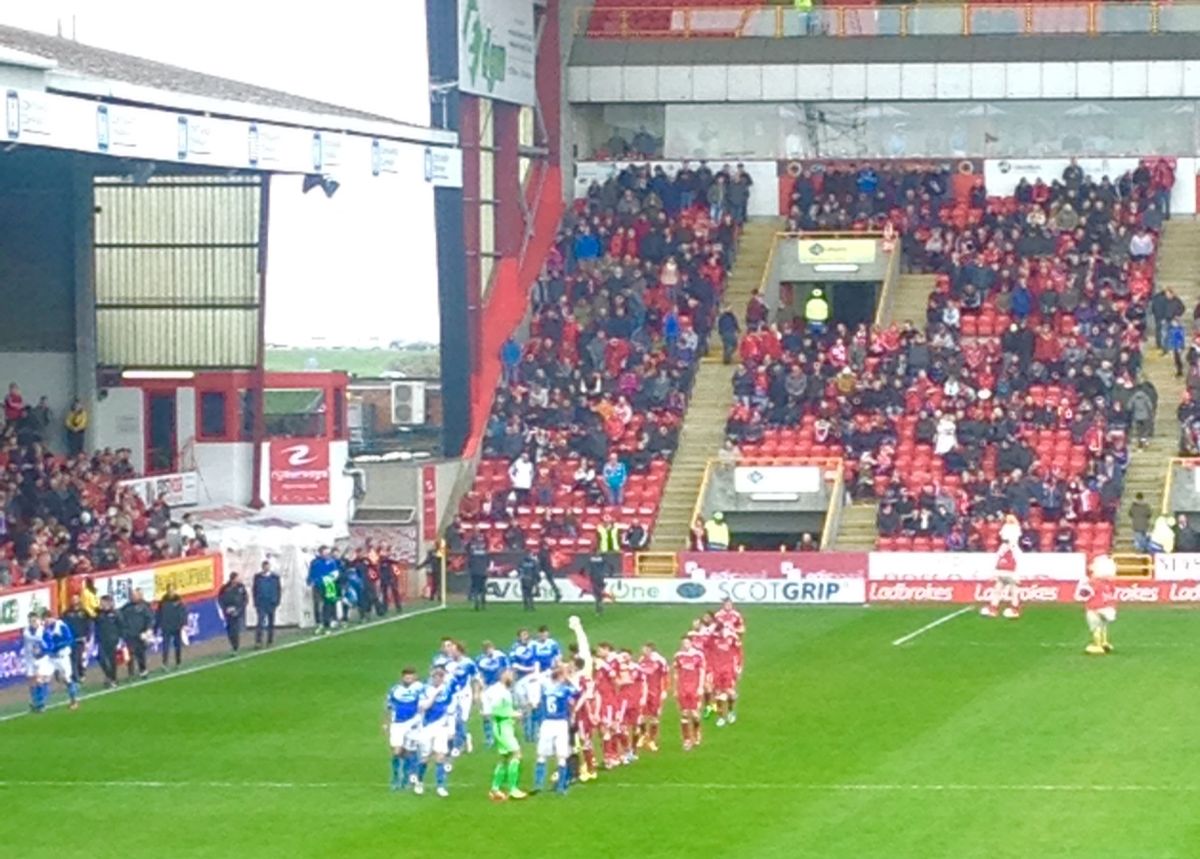 On a very chilly afternoon, Derek McInnes decided he would experiment with the team, knowing that a victory would all but secure the second top spot in the league.
He decided to play both Ryan Christie and Niall McGinn and opted for a back three of Ash Taylor ,Andy Considine and Shay Logan.

This also gave the opportunity for Kenny McLean to be pushed a bit further forward.

Almost from the kick off the defence was called into action when a slack pass by the sometimes shaky Taylor fell to Danny Swanson. The net result was the first corner of the game for the visitors.

Seven minutes in, a cross from probable future captain Graeme Shinnie fell into the path of forward Adam Rooney who deftly turned the ball goalwards, and only a timely intervention from keeper Alan Mannus prevented the Dons’ striker from scoring his twentieth goal of the season.

Referee, Alan Muir, set the tone of the game soon after by booking both Logan and Jonny Hayes, both of which possibly just merited a talking to.

Soon after this, he totally ignored the clash between Chris Millar and Christie, when the former deliberately and cynically pushed the Aberdeen player into the visitor’s dugout. Why the fourth official didn’t bring this matter to the attention of the man in charge is beyond me. Before he limped off injured, Millar again avoided punishment when he again showed the style of play that St Johnstone participate in, when he body checked Jonny Hayes.

This tactic had the desired effect though, as the Dons failed to adapt and found it hard at times, despite trying, to get back to their crisp, passing play that has seen them see off various pretenders this season.

The first half continued in the same vein, with too much midfield head tennis being played. Much to the dismay of the fans. Just before half time, the first real chance of the game fell to Aberdeen, when a pleasing early cross into the box by Hayes, found McLean running in behind the defenders. But the on form midfielder should have done so much better with his diving, unchallenged header, and the half ended goalless.

Just into the second half, the home side should have took the lead when that man McLean again found himself with the chance to score. It came when a long free kick was received by Logan who passed the ball to the aforementioned midfielder. But, as was the character of his efforts today, it went over the bar for a goal kick to the team from Perth.

Next to break forward was the soon to be departing Ryan Jack, who played a fine ball to Rooney, who fired in a dangerous cross into the area, only to see Steven Anderson turn it past his own post for a corner.

The game was desperately in need of a change of direction

From the resulting corner kick by McLean, Mannus had to be sharp to deny Christie, and then the ball ended up at the feet of Taylor – another player that looks to be departing in the summer.

His shot was unsurprisingly way off target.

Not long after that, the ever willing McLean saw another of his efforts, this time from further out, go high, wide, and not at all handsome.

The visitors then had their first chances of the game when first of all their captain, Steven Anderson, headed inches wide from a free kick, and then the ever dangerous Swanson’s long range attempt went, thankfully, wide of the target.

With 60 minutes gone, a fine piece of play from Christie resulted in a good ball laid into the path of Jack. His shot was not the one to get the opener though.

The game was desperately in need of a change of direction, and when Jayden Stockley and future MK Dons player, Peter Pawlett, replaced Rooney and Christie the fans were hoping that they could do as they have done so often this season and grab the vital winning goals.

But this was not to be. Their fresh legs didn’t change the way of the pretty poor fare on display at all.

The opening goal came under pretty controversial circumstances with only ten minutes left to play. Joe Lewis parried a shot from Swanson. The ball fell to Jack who was only a couple of feet  away from the keeper on the left side of the goals in a crowded area. The captain should have just turned it out for a corner, instead he hesitated on the ball and touched it back to Lewis.

With the referee at close hand viewing the incident, he rightly awarded an indirect free kick, despite the player’s protestations, and later claiming he was nudged in the back causing his foot to move the ball, from where I sit, directly behind the goal, it saddens me to say, that this was one of the few decisions that wannabe-Willie-Collum referee Muir got correct.

Rarely does anybody score from an indirect free kick in such close quarters to the net, but the writing was on the wall when The Dons lined up as if they were defending a free kick from further out. Instead of crowding out the goal mouth as most teams do, the set up a small defensive wall, with Lewis crazily positioning himself just behind the wall, with one man on the back post.

Liam Craig noticed this calamitous set up, and squared the ball to Swanson, who tucked it away from a relatively tight angle into the gaping space at the back post.

Aberdeen had to then chase the game – a situation that would never have developed had they been more positive in their finishing, and three minutes later, the inevitable happened. Goal scorer Swanson passed the ball to young Craig Thomson, and he fired a perfect angled and executed shot past Lewis to increase their lead.

Another poor decision occurred over on the South Stand side when Stockley and a couple of St Johnstone players were involved in a nothing situation which very nearly got out of hand. They were all lying on the ground after a period of play, nothing really, but when they stood up goalscorer Craig got right into Stockley’s face in a very threatening manner. The tall Aberdeen forward held his hands up and backed away.

Craig didn’t give up trying to make something out of nothing, and when the Perth lad threw himself to the ground causing Stockley to fall over him as he walked away from the farcical episode, other players got involved. Instead of sending Craig off for simulation, referee Muir showed only a yellow card, then mysteriously issued the same to Stockley who had already calmly walked away from the melee.

The end couldn’t come quick enough for what was left of the poor 10,606 crowd, and when the final whistle went, we all bemoaned the fact that two home games in a row we have lost a game in a five or six minute second half spell to a lower placed team playing in blue.

It looks like our post  split season poor form continues. This time with only nine points separating us from the plucky newcomers, the last four matches are vitally important.