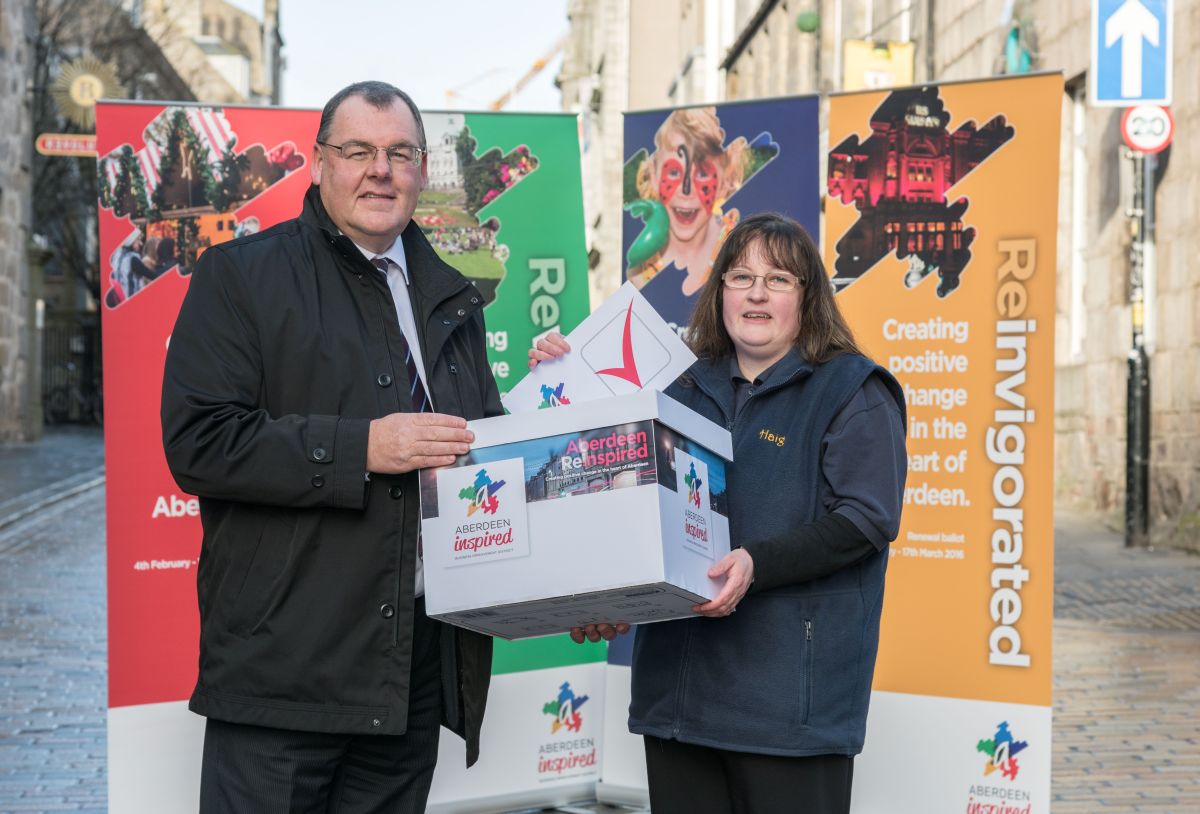 A leading business organisation is planning to invest a projected £6.5 million in Aberdeen city centre as voting opens today (February 04) for a crucial renewal ballot.

A wide range of city centre projects and initiatives have been outlined for the next five years as part of Aberdeen Inspired’s planning towards the renewal, with an estimated £1.3m budget forecast annually in its new business plan.

Levy players will begin to vote from today (February 04) on whether the organisation returns for a second five-year term, with the ballot running until March 17. The majority must vote “yes” to allow Aberdeen Inspired to make these ambitious plans a reality.

“The next six weeks are vital for Aberdeen Inspired as we look towards our future plans should the ballot be successful. We are proud of what has been accomplished in our current term and are even more excited about what lies ahead.

“As part of the renewal process we have set out our aims in a business plan for our levy payers which highlights our aspirations and level of ambition for our next term, along with budgets and projects that will be carried out if there is a positive ballot outcome.

“If we do return for another five years we have estimated that Aberdeen Inspired will have a minimum of £6.5 million to utilise on a variety of enhancement and improvement projects throughout the city. This is a great investment in the future of Aberdeen which equates to around £1.3 million per year – funds which could play a part in regenerating the city centre.

“We are passionate about building on the positive work that Aberdeen Inspired has already carried out and hope we are in a position to play a major role in ensuring a bright future for our city centre.”

The organisation has organised future projects under four main themes – attractive city centre, promoting our city centre, safe and welcoming city centre and helping your business – all of which aim to be beneficial to its 700 levy payers throughout the BID (Business Improvement District).

Planned projects to improve the city centre aesthetic for the year ahead (2016-17) include a variety of multi-faceted clean-up campaigns ranging from a concentrated focus on Union Street to an extended programme of decorative floral baskets and bedding to further creative lighting projects of a similar nature to the well-received installation within Golden Square.

Aberdeen Inspired intends to bring forward a number of ‘Adopt an Area’ and street art projects – as well as utilising vacant properties in the city centre by lobbying owners to consider providing free and discounted space for pop-up enterprises and exhibitions.

The organisation also plans to build on the success of the Aberdeen Christmas Village, which welcomed more than 500,000 visitors, by increasing the size of the Village and attractions as well as organising a bigger programme of festivals throughout the city centre. This includes the recently announced Play Me, I’m Yours street piano exhibition – which aims to encourage people to engage with their city by providing pianos for the public to express themselves and interact with each other.

Other plans that will be carried out if Aberdeen Inspired is voted through include further backing of the city’s Purple Flag status – an accolade which recognises a safe and secure night time economy – as well as a follow-up to the current wayshowing project, which would involve suspended signage installed throughout the city centre to identify specific streets and quarters.

“All of the projects we have outlined for the next five years would bring tremendous benefits to Aberdeen. If we are lucky enough to be voted through for another term we promise to bring forward major enhancements to the BID and city centre, all of which aim to drive footfall to the zone and increase dwell time. This is of huge benefit to our levy payers, as well as to residents and visitors to the city.

“We work closely with our levy payers on a very close basis and have taken on board their ideas and concerns when devising our projects, paying particular focus to the aesthetic of the city centre, as well as bringing new events to Aberdeen as part of our festival plans and continuing to help towards safety and security.

“Everyone in the Aberdeen Inspired team is passionate about making the city a better place and we are confident that we will be given the chance to carry out our plans and continue to revitalise the city centre.”

Aberdeen Inspired has led key projects over the past five years, with the Aberdeen Christmas Village and the rooftop garden at the St Nicholas centre particularly popular. The organisation has also been involved in key infrastructure initiatives, such as the installation of Big Belly Bin solar compacting technology throughout the city centre in addition to funding deep cleans of Union Street, floral enhancements across the BID and shopfront improvements.

The organisation is currently finalising two major projects in the city centre – installing over 50 street information signs and lighting up the Colonnade at St Nicholas Kirk.

Further information on the work of Aberdeen Inspired is available at www.aberdeeninspired.com