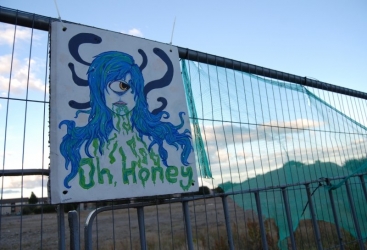 As I was walking past the old Summerhill Academy site on the Lang Stracht last Thursday night I noticed an amazing open-air gallery adorning the fencing.

It stretched all the way from the bus stop round the corner and down the lane to Gairsay Drive. 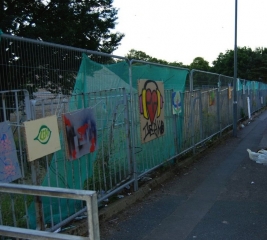 They were composed in varying media from spray paint to fine pen-work to collage.

Unfortunately, the evening light was poor.

Therefore the quality of these photographs don’t do the artwork justice. 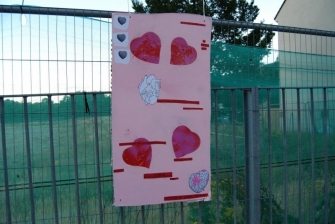 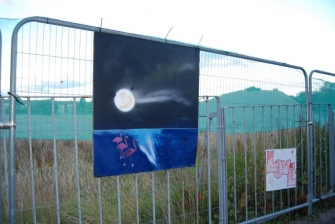 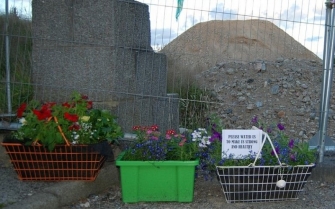 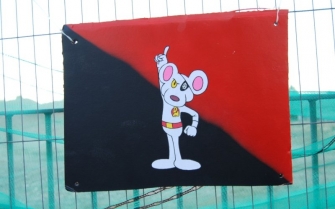 Two of the arts contained something of a manifesto and the name of the group who had installed the gallery. 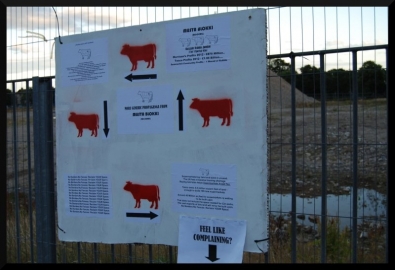 Intrigued, I investigated this group and managed to get a hold of them by email. They sent me the following statement:

An open-air gallery and garden at the old SummerhilAcademy on the Lang Stracht.  A place once of education, a place once for community.

To highlight with beauty the ugly mess that has been left by the supermarket wars of the 21st Century.

Morrisons have created a pile of rubble taller than the houses whose view it blights.

“This is because Tesco objected to their plans then throw up a supermarket on the site they had left unused for decades as soon as Morrisons acquired the Summerhill site. Tesco must think the people of Summerhill are only worth building a shop for to stop another chain from making profit.

The council may have given Morrisons the green light now, but will they replace the rubble with a store?

Supermarkets buy land and leave it unused to avoid tax.

Around 40 million square feet of land is owned by supermarkets.

The vast majority of it will never be built upon.

Beneath the pavement, the beach!

Fences are for climbing – borders are for crossing – the world is ours but only of we make it so, yes?”

Their previous works include the 2011 installation “Wood”.

Constructed in bronze and granite (effect) it was erected in Union Terrace Gardens, which at the time were under threat.

I would highly recommend a visit to this unusual gallery, but alas, it is no longer there.

Instead, I hope Aberdeen Voice readers can at least enjoy this pictorial record.

Here is a bit more about the group’s ethos – be inspired!

Art is accessible and free
Art can be created by anyone
Public space is contaminated by the corporate debris of the 21st century
Public space should be reclaimed – Beneath the pavement, the beach!
We resist corporate domination and social apathy
We commit to shaping something original despite our culture’s fascination with the disposable
We commit to shaping something original from society’s superficial consumer culture
If we cannot enjoy the process, we cannot enjoy the result

If we cannot dance it is not our revolution 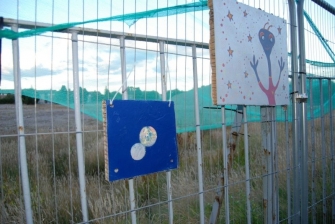 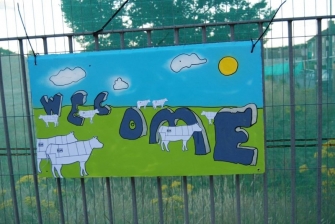