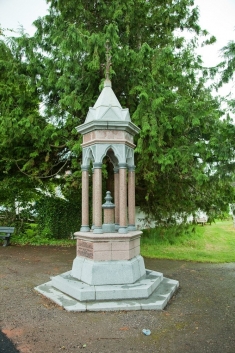 Michael Caine may have successfully defended Rorke’s Drift against the Zulu army but the truth of the Zulu War turns out to be slightly different from the Hollywood version. Duncan Harley examines a slice of Scottish history commemorated by a Fochabers fountain.

Over the years, I have often driven past this Morayshire fountain, never thinking to stop and read the inscription. Today I took a wee look and discovered that it is a tribute to Major Allan Wilson, late bank clerk of Fochabers.

Lord Chelmsford had famously invaded Zululand without the knowledge of the UK government in the hope that he could capture Cetshwayo, the Zulu king, before London discovered that hostilities had begun.

Things however did not go smoothly, and this monument is a link to those events.

The fountain erected in memory of Major Wilson was commissioned by the Duke of Richmond and Gordon and is inscribed:

Erected by the natives of Fochabers to commemorate the heroic stand made against the forces of the King of Matebeleland by Major Allan Wilson of this town who with a small band of comrades fell bravely fighting against overwhelming odds near the Shangani River in South Africa on the 4th of December 1893.

Allan Wilson (1856-1893) was born in Glen Urquhart, Ross-shire, and is best known for his leadership of the Shangani Patrol during which he met his death, making him a national hero in Rhodesia.

On completion of his bank apprenticeship in Fochabers, he went to the Cape Colony and joined the Cape Mounted Rifles. He fought in the Zulu War and the First Boer War and was promoted to Sergeant. After taking his discharge he became a trader and gold prospector and earned a commission in the Basuto Police.

Later, he joined the Bechuanaland Exploration Company as Chief Inspector and was sent as their representative to Fort Victoria (now Masvingo) in Matabeleland, serving as the senior officer in the Victoria Volunteers. He became a Major and was killed while leading the Shangani Patrol during the First Matabele War.

Wilson is buried, along with most of his patrol and with Cecil Rhodes, in Matabo Hills, Zimbabwe.

When the First Matabele War broke out in 1893, Wilson was given command of the Victoria Column and appointed to the rank of Major. He led the Shangani Patrol in search of King Lobengula and on 4 December, he and thirty one of his men were cut off from the main column and killed by the Ndebele warriors. 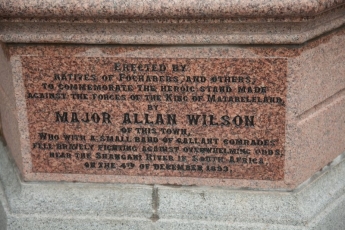 In desperation, and only hours before his death, Wilson sent Frederick Russell Burnham and two other scouts to seek reinforcements from the main column commanded by Major Patrick Forbes.
Unfortunately, the battle raging there was just as intense and there was no hope of anyone reaching Wilson in time.

The incident achieved a lasting, prominent place in Rhodesian colonial history and is considered to be the British equivalent to Custer’s Last Stand.

A patriotic play, Wilson’s Last Stand, was written and it ran in London for just over two years. In the play, it was claimed that in killing Wilson and his men, Lobengula lost eighty of his royal guard and another 500 Ndebele warriors. Wilson seemingly, was the last to fall and the wounded men of the Shangani Patrol loaded rifles and passed them to him during the final stages of the defence.

When their ammunition ran out, the remaining men of the Patrol are said to have risen and sung, God Save the Queen. Once both of Wilson’s arms were broken and he could no longer shoot, he stepped from behind a barricade of dead horses, walked toward the Ndebele, and was stabbed with a spear by a young warrior.

The truth may have been slightly different, but that’s show business for you, I suppose!