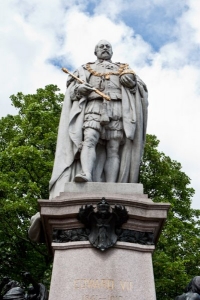 Connection with Aberdeen: Once caught one of his many doses of clap off a chambermaid who owned an Aberdeen Terrier. 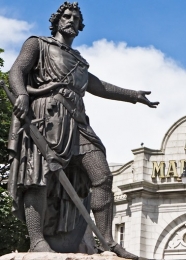 2) William Wallace – colossal bronze statue by W. Grant Stevenson which is by far the cities most famous and is located adjacent to Union Terrace Gardens and opposite His Majesty’s Theatre.

Connection with Aberdeen: Although the admirers of our national hero have never been truly able to say that his heart was in Aberdeen it turned out that one hand, half a buttock and 25% of his thoracic cavity was. 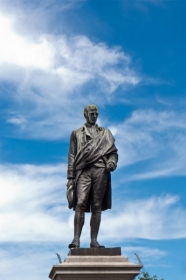 Connection with Aberdeen: A frequent visitor to the Granite City, Rabbie became a great devotee of the ‘Aiberdeen Rowie’ at this time and as many of the literati know, the original poem of ‘To A Mouse’ was initially addressed to our local delicacy:

I’m daein’ a readin’ in Fittie at three

Jist time for a rowie or twa wi’ my tea. 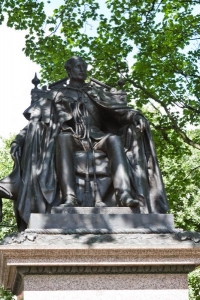 4) Albert, Prince Consort – bronze statue of him seated opposite the Central Library by Carlo Marochetti

Connection with Aberdeen: The Prince Consort’s penis ring (Oh yes, he had!) was made by the local ironworks at J.M. Hendersons in King Street. The physical effect of this item on the youthful Queen Victoria was to engender Her Majesty’s famous catchphrase “As hard as Henderson’s”- a phrase which has since passed into local usage.

Connection with Aberdeen: A fanatical Bon Accord supporter for many years; Major General Gordon succumbed to a cardiac arrest in Khartoum in August 1885 on receiving a telegram telling him of the team’s 36-0 defeat by Arbroath. 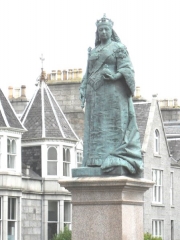 6) Queen Victoria – the bronze statue stands on the roundabout at Queens Cross facing west towards Balmoral. It was originally erected by the tradesmen of the city at the south-east corner of St. Nicholas Street and Union Street in 1893, but was moved to its present location in 1964.

Connection with Aberdeen: A regular visitor to the city; Her Majesty would frequently linger for the odd pint at the newly opened ‘Prince of Wales’ before catching the train to Balmoral. Her Majesty’s statue faces west towards Balmoral, no doubt in commemoration of her original phonograph hit single of ‘Go West’ which achieved international acclaim in 1874. 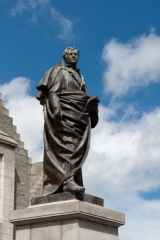 7) George Gordon – the 5th Duke of Gordon’s granite statue by Thomas Campbell, stands in Golden Square and was moved from the Castlegate in 1952.

Connection with Aberdeen: Er…. nothing that much really except his family fleeced large chunks of the North East. He was believed to be a Freemason and an Orangeman and is described on Wiki as a deeply bigoted reactionary who, with nineteen others, were the only people in the whole parliament who voted against the 1832 Reform Act and for the continuation of the utterly corrupt ‘Rotten Boroughs’. ACSEF would probably have loved him. 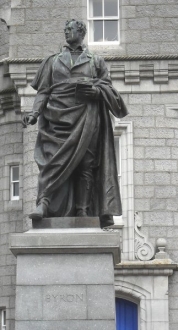 Connection with Aberdeen: Lived in Aberdeen during his formative years which affected some of his later poetry. For example, the original line for ‘She Walks in Beauty’ actually referred to a prominent local lady of negotiable virtue and was originally written as: ‘She walks in beauty like the night’. Given the great man’s inability to keep his trousers on, legend has it that on the 200th anniversary of his death, his statue will come to life. Pausing only to dash off a quick ode to Union Terrace Gardens, the statue will then enter the Grammar School and successively roger the entire sixth year, the principal’s dog, the janny’s hamster and any passers-by within arm’s reach.