Monday 12th July 2010, warm and sunny. Left the car in the Denburn car park, walked under the Viaduct and into Union Terrace Gardens – the one substantial green space in Aberdeen city centre – beautiful, verdant, quiet, restful, and well-maintained as always by Council Parks and Gardens staff. A fair smattering of people sitting around, including women with children. No drunks. The trees all seem in good health, despite ACSEF propaganda. Up on to Union Street. The awful, tacky Sports Direct shop frontage – formerly Zavvi, before that the Virgin Megastore – is still in evidence, months after we were assured by the Planning Department that it would be dealt with.

To the Oxfam Bookshop in Back Wynd, then down the west side of Market Street to view the impressive façades on the east side. Into Hadden Street and the Green. As part of the Green Townscape Heritage Initiative, the streets around the Green have been pulled up and resurfaced with what appear to be small cobblestones and made level with the pavements, creating an impression of greater spaciousness. Large rectangular enclosures have been constructed from synthetic granite blocks, matching the side of the Aberdeen Market, to accommodate trees and possibly other plants. We are back in the expensive territory of container gardening, high-maintenance and labour-intensive if the containers are not to become a squalid mess and if the trees and plants are to survive. We doubt that the Council can afford the manpower required to do this properly.

There is an unusually large number of people in the Green at 3pm on a weekday, mostly sitting outside the restaurants on the north, or Union Street, side. The Market Arms, at the corner of Hadden Street and Stirling Street, and the Old King’s Highway on the south side of the Green both seem busy enough. The view to the west of the Green is as bad as ever. The former Trinity Shopping Centre, now The Mall Aberdeen, is a huge and truly ugly building, perhaps seen at its worst from the lower end of Bridge Street, although it looks little better from the Green, Rennie’s Wynd and Wapping Street. More resurfacing, small cobblestones and mock-granite rectangular enclosures are to be seen in Trinity Street, behind the Tivoli Theatre, and in Carmelite Street.

Up the Back Wynd stairs, the treads in poor condition and much litter and detritus in evidence. Across Union Street and back down into Union Terrace Gardens, extraordinarily quiet, verdant and restful after the traffic up on the main drag. Only the crumbing ruin of the Triple Kirks spoils the aspect. It is, however, home to nesting peregrine falcons, and the presence of these top predators is indicative of the existence of much other wildlife lower down the food chain and resident in the Gardens. And so under the Denburn Viaduct, past His Majesty’s Theatre and back to the Skoda. 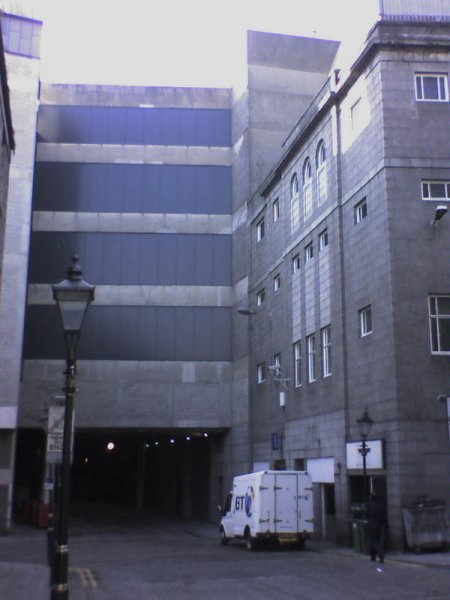