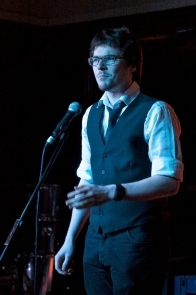 Now into its third month, The Drummond Varieties sees a diverse range of talent take to the stage every month including magicians, ventriloquists, comedians, dancers, musicians and more.

Throughout the night members of the audience are also treated to a delicious candlelit meal, and are able to compete in an interactive competition for a fantastic prize.

Topping the bill in August is the Pied Pyper Freak Show, a group of trained professionals who will risk life and limb to entertain their audience.

Re-enacting stunts first seen in Victorian side shows, this is a unique act in the North East of Scotland that mixes humour with amazing feats of strength and bravery.

Also appearing is improvisational comedy troupe Wildly Unprepared, who will perform for the first time in Aberdeen since their successful run at the Edinburgh Fringe. Taking cues from the audience, these masters of comedy can turn any suggestion into a startlingly funny sketch.

Completing the line-up are two up-and-coming student acts that are guaranteed to dazzle the crowd. The Aberdeen University Juggling Society will appear to defy gravity with their amazing displays of dexterity, balance and coordination, while comedian Mitch Skilling will have the room howling with laughter at his hilarious take on the world around him.

Each month, The Drummond Varieties is hosted by local magician Eoin Smith ( pictured ). A regular at variety and comedy nights around the city, Eoin will guide the audience through the evening with a little magic and a whole lot of energy.

“The first two shows have been fantastic, and I think we’ve raised the bar again this month. It’s been great to see so many people coming out to support variety in Aberdeen.

“There’s a lot of talk about variety and cabaret undergoing a revival at the moment, but the truth is that it never really went away. There’s a great variety scene forming in Aberdeen, and I hope that the public really get behind it and help it grow.”