Aberdeen’s embryonic Dickens Fellowship had a most successful meeting last week, with lively discussion of Scenes from Sketches by Boz. David Innes reports, with thanks to Dr Paul Schlicke and to Grampian Housing Association for the kind hospitality. 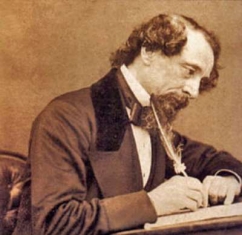 Several of the group spoke warmly of their favourite Scenes, why they found them to be especially moving, horrifying or entertaining and how they gave insight to Dickens’s own radicalism at a time of significant political and social upheaval.
A query as to why the passages are written by ‘we’, revealed that this was a journalistic tradition, claiming and emphasising collective adherence to a principle, which Dickens skilfully utilised in Sketches by Boz.

Prose fiction was still regarded as inferior to formal writing in the early nineteenth century, so Dickens was a hugely influential in gaining narrative fiction its due respect.

The group discussed how, with so little formal education, the author became such a formidable wordsmith, yet despite his love of theatre why he was such a poor playwright. We found out that in writing his fiction, he acted out, in the privacy of his writing den, each character’s dialogue as it took shape. The theatre was an incalculable influence on his writing and his dramatic sell-out reading tours in later life.

As ever, where open friendly conversation takes place, we became diverted occasionally and discussion of Scenes led to brief examinations of Dickens’s views on contemporary transport, his ability to document conviviality and vitality and his not always kind treatment of his friends and loved ones.

We move on to discussion of a novel at our next meeting, and the choice is Hard Times, concentrating on the first section ‘Sowing’ (chapters 1–16). The meeting will again be held in the Grampian Housing Association, 74 Huntly Street, at the corner of Huntly Street and Summer Street, on Thursday March 28 from 1900 to 2100. There is free parking in the GHA car park.

Meetings are open to all. Anyone who has an interest at all in this master storyteller will be made welcome. You can e-mail p.schlicke@abdn.ac.uk to be added to the mailing list