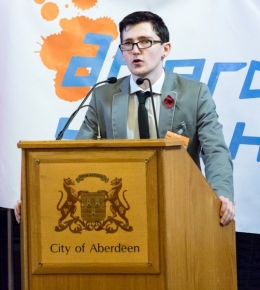 Candidates in the Scottish Youth Parliament elections in Aberdeen were today joined by councillors and MSPs in a bid to push for more young people to vote before the close of the polls this week.

“Voting takes two minutes and is very easy. This year we want as many young people as possible to log in and have their say in choosing their youth representative.”

“The SYP is a great forum which has influence at local, national and international level. I have had a fantastic experience over the past two years as MSYP for Aberdeen Central and am proud to have helped make a difference on many issues, like Equal Marriage and Votes at 16.”

“As the deadline for casting votes fast approaches, I would urge those aged 14-25 in the city to participate, to have their say in electing representatives to campaign on issues that matter to them.”

If electors, aged 14-25, don’t have a YoungScot card number, they can obtain a polling code by emailing info@youngscot.org with their name and postcode.

Candidates for election are as follows: