As tension mounts on the Korean Peninsula, Jonathan Russell of Aberdeen and District Campaign for Nuclear Disarmament (CND) provides background to the conflict. Jonathan also examines its potential for leading to a nuclear and conventional arms build up between the United States and China and to a much wider conflict.

This is one of a series of articles being produced for Aberdeen Voice by Aberdeen and District CND. 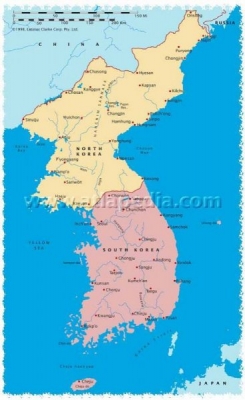 Jonathan Russell will give a talk on the Korean conflict at the meeting of Aberdeen and District CND on Monday 12th November.

Aberdeen CND have meetings on the second Monday of each month at 7.30pm on the top floor of the Belmont Cinema, Belmont Street, Aberdeen. You are more than welcome to come along.

This week’s article gives some historical background to the present tensions.

It will be followed after the talk on Monday 12th by two subsequent articles in Aberdeen Voice on Korea specifically and the wider Asia/Pacific area.

North and South Korea are two very different states situated on the Korean peninsula, an area similar in size to that of the UK, lying between China and Russia to the North and Japan to the South-East. Japan occupied Korea from 1905 until 1945 and has a brutal history in the region.

In 1910 the Treaty of Annexation turned Korea into a fully fledged Japanese colony. This heralded a period of oppressive colonial rule. The Japanese aim was to modernise Korea and they built roads, railways, and waterways . They also eradicated nostalgia and hundreds of uniquely Korean buildings were destroyed.

The Korean Communist party was formed in 1925 and it became involved in guerrilla wars with other Korean groupings against the Japanese. The Western world turned a blind eye and only Christian missionaries raised concerns. By 1948 the Japanese language was made compulsory. During the Second World War conscription took place into Korean mines and Korean and Japanese factories. Thousands of Korean leaders from schools, churches and newspapers were thrown into jail.

This was done as a hasty expedient based on no more than a National Geographical map. After 40 years of Japanese oppression Korea was not prepared for the collapse and withdrawal of the Japanese in August 1948. On the 8th September 1948 Soviet troops moved into the North and United States troops into the south.

Initially the Korean Workers Party tried to establish a Government. The Russians backed a people’s committee in the North originally headed by a Christian nationalist Cho Mansik.  However Stalin came to favour a communist resistance fighter called Kim ill Sung whose ‘dynasty’ the Democratic People’s Republic of Korea still remains in power.

This led to a horrendous three year war resulting in the estimated deaths of 2.5 million combatants and civilians.

The politics of the Cold War resulted in the 1948 establishment of two separate governments, North Korea (Democratic People’s Republic of Korea and South Korea(Republic of Korea). There was a major contradiction in this in that more communist party members were living in the South and more Christians in the North.

In October 1948 Synman Rhee a right wing nationalist returned to Korea in a plane arranged by General Macarthur. Following elections Synman Rhee took over the Presidency of the South. Soon after this there was what was known as the autumn uprising which was brutally put down. In Jeju island at the bottom of Korea 160 villages were destroyed on the orders to Rhee by the United States and nearly a third of the population were killed. Soldiers of Rhee’s 14th regiment mutinied but they themselves were brutally put down.

Following a build-up in tensions the North Korean army – the Korean People’s Army -crossed the 38th parallel on 25th June 1950 in response to the massacre of communists in the South. This led to a horrendous three year war resulting in the estimated deaths of 2.5 million combatants and civilians.

Initially the North nearly captured the whole of the South but following a counter offensive led by General Macarthur the reverse was achieved.

The leadership of the newly declared People’s Republic of China under Mao also supported the North but was initially reluctant to get involved as they were both recovering from and consolidating power following their own civil war. However when United States and its allies nearly reached the Chinese border they entered the war with an estimated 340,000 troops.

The war was part civil war but primarily it was a struggle between the Communists and the Western allies. 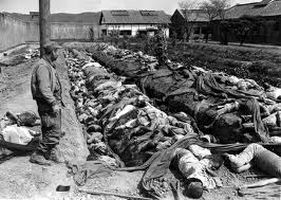 The United States dropped more bombs during the conflict than they had in the Second World War and used napalm in greater levels than they did in Vietnam.

Both sides committed appalling atrocities against soldiers, civilians, and prisoners of war.

The use of child soldiers became a common occurrence on both sides.

After Stalin’s death the Soviet Council of Ministers ordered Mao and Kim to seek peace. The ending of the war (it has never been officially declared- a truce still remains) led to no change in that the pre-war border remained un-altered along the 38th parallel.

Without doubt the entire Korean people were the losers and the area has remained one of high tension. Korea has not been affected by ethnic tensions as in other parts of the world following the war but by ongoing ideological tensions.

In the early days the northern Democratic People’s Republic of Korea was a communist success story but over time in particular after the fall of the Soviet Union it rapidly declined. Kim IL Sung its leader from the inception had close links with Stalin and in similar vein was involved in purges to get rid of his opposition.

Following Stalin’s death Kim IL Sung developed his totalitarian system called ‘juche’ a kind of Confucian Socialism which demanded that all activity would be beholden to the state. Emphasis went onto industrialisation to the neglect of agriculture and following the collapse of the Soviet empire this led for many to starvation.

There has been some improvement in North Korea since with China recently putting £3 billion into the economy but there is no doubt that the citizens of North Korea are much poorer than those in the South and vulnerable to shortages of food. The Kim IL Sung dynasty with its military 1st, 2nd and 3rd policy which is a huge drain in its overall resources is still in place with the young Kim IL Sung the third having just taken over the reins of power.

The people are poor and even the army are mostly involved as peasants on the land. Amnesty International in the United States has satellite images of political camps in North Korea where they estimate there are 200.000 people held in horrendous conditions.

The North Korean government are adamant that the camps do not exist. In the Korean situation even more than others it is difficult to distinguish between propaganda and truth from either side. If the camps to exist in the form suggested they are truly horrific.

There was another form of totalitarianism in the South under their leader Syngman Rhee’s autocratic and corrupt government and most of the governments and military governments that followed. The South had their National Security Law which allowed clamp downs on opposition.

In present day South Korea Amnesty International, report, that the South Korean Government are increasingly invoking their national security law. This restricts freedom of expression particularly in the context of discussions pertaining to North Korea. In March the UN Human Rights Commission considered the cases of 100 South Koreans.

Initially it was South Korea’s economy which did not work well with an over reliance on foreign aid from the United States and North Korea was seen as a communist success. However over recent years South Korea has become one of South East Asia’s booming economies with standards of living rising but with marked disparities in wealth.

According to a speaker on BBC’s Women’s Hour from Nottingham university who has spent a number of years in North and South of Korea, those defecting from the North find it difficult to adapting to the hierarchical style of businesses in South Korea. Korea is indeed a place of many contradictions and working out what is true and what is propaganda is complex.

For a much more detailed history of Korea an excellent book ‘Everlasting Flower a History of Korea’ is available in Aberdeen’s Central Library. Information is also available on the Internet.

Next week I will be writing more on the present situation and the third and final article which will be published following my talk will look at Korean conflict and the wider military build up and potential for conflict in the wider Asia/Pacific area.