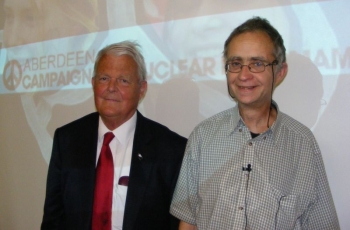 Veteran peace campaigner Bruce Kent says it is time for Scotland to get rid of its Trident Nuclear Weapons.  With thanks to Jonathan Russell.

The United Kingdom’s leading peace activist, spoke at a public meeting in Aberdeen on October 3rd as part of a speaking tour of the East Coast of Scotland taking in Inverness, Aberdeen, Brechin and Dundee.

Bruce outlined his opposition to both Nuclear Weapons and warfare in general, and started by questioning the way the world is presently dealing with conflict.

He told the audience that he lives in a part of London that has a wide variety of ethnic groups and said that, while there are challenges between different people and ethnic groups, people manage to get by with each other without having to take a shotgun to their neighbours.

This he contrasted with present conflicts where the leaders of the world choose to deal with these disputes by military means rather than by mediation and noted that we can see the results of this in conflicts in Iraq, Afghanistan, Libya and, presently, in Syria.  He suggested that, when investigated, pretexts for military invasion are usually found to have no truth to them.

Bruce argued that we need to start honouring peace makers and peace keepers rather than the politicians and generals who cause havoc around the world.  The acceptance and glorification of violence in our society needs to be changed to a culture which encourages peace, and the fact that it is found acceptable for business to create and sell arms and Nuclear Weapons has to end.

Treaties have been signed to stop chemical weapons and land mines and the same could be true for arms and nuclear weapons.  People are suffering across the world as a result of conflict, something which the aid agencies and people in general need to speak out about more powerfully.

Bruce outlined the horrific nature of the 19,500 nuclear weapons which still exist on our planet.  These weapons are sure to be used at some point as world leaders have only minutes to decide whether to use them and incorrect, or faulty, information linked to the fallibility of our political leaders, could lead to the destruction of our planet.

Scotland, he feels, presently has a unique opportunity with independence to get rid of Trident Nuclear weapons and while he does not back any political party, he noted that the majority of Scottish politicians and 75% of the population are against the Trident weapons which are housed here for the UK Government.

Getting rid of Trident from Scotland would, he said, make it impossible for the rest of the UK to house its nuclear weapons and would set the right example to the rest of the world.

At 83, Bruce Kent is still active and sets an example to us all.  He has been a prominent figure in the peace movement for over 40 years and is presently Vice President of the Campaign for Nuclear Disarmament and Vice-Chair of the Movement for the Abolition of War.

One Response to “Bruce Kent Speaks To Aberdeen”