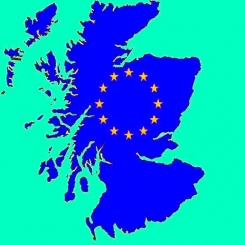 With a lively debate taking place on an independent Scotland’s place in the European Union, EU national Christian Allard looks to the future.

What a week that was for EU nationals like me living in Scotland.

It seems some politicians would like to see the back of us.

We are all EU nationals: Scots, Welsh, English, Irish (on both sides of the border) and all who chose to come and live in Scotland from Austria, Belgium, Bulgaria, Cyprus, the Czech Republic, Denmark, Estonia, Finland, France, Germany, Greece, Hungary, Italy, Latvia, Lithuania, Luxembourg, Malta, the Netherlands, Poland, Portugal, Romania, Slovakia, Slovenia, Spain, and Sweden. (Iceland, Liechtenstein and Norway are also included although they are not members of the EU).

It may come to a shock to some politicians to learn that we have the same rights that they have to live and work in Scotland.

People from both sides of the referendum for Scotland to become an independent country have called for calm and to stop the hysteria around the position of an independent Scotland in Europe.

On Saturday morning I happened to listen to a debate on Radio Scotland when the example of a French national living in Scotland and paying tax was given; a French national who, after voting YES for Scotland to become an independent country, would wake up to find Scotland being out of the EU.

This is the incredible proposition that Liberal Democrat MEP George Lyon tried to defend in the same BBC radio programme i.e. that somehow Scotland would have to apply to rejoin the EU after independence. More incredibly, he added that the rest of the UK would stay in the EU but not Scotland.

Mr Lyon should understand that you cannot strip the EU citizenship from EU nationals living in Scotland – including you and me – without our consent. The solution to the problem, if Mr Lyon wants to call it a problem, is that after we vote YES, both Scotland and the rest of the UK will negotiate a new arrangement with the other EU members to reflect the new constitutional setup.

Ian Hudghton, an SNP MEP who participated in the same programme, made it clear the EU was watching and waiting to see the position of the Westminster government. Now that David Cameron and Alex Salmond have signed the Edinburgh agreement, both governments will respect the outcome of the 2014 referendum and, of course, so will the other EU member states.

This is very much about our right of self-determination and how the new constitutional setup will be respected by all – even the likes of George Lyon, who pledged to respect the vote of the people.

I have a message to the NO campaign.

We EU nationals will exercise our right to vote for a better future for our children and grandchildren. If George Lyon MEP, David Cameron and the rest want us to vote NO, they must change their tune and stop spreading fear and doubt. Instead, they should try and tell me why I should keep on paying taxes to a Westminster Government I did not elect.