Aberdeen Voice presents the second of three articles by Jonathan Russell  of Aberdeen and District Campaign for Nuclear Disarmament (CND) investigating the nuclear and military build up and tensions in Korea and the wider Asia/Pacific situation.

Jonathan will be giving a talk on this subject at 7.30pm on Monday 12 November in the conference room on the top floor of Aberdeen’s Belmont Cinema. 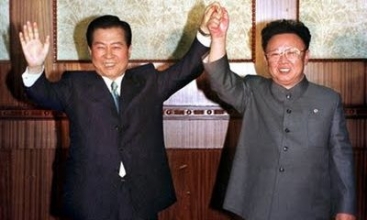 The one Korean politician who has cut a positive figure in recent years is Kim Dae-Jung.

President of South Korea from 1998-2003, the introduction of his Sunshine Policy led to marked improvements in relations between North and South Korea.

In the period following Dae-Jung’s presidency, however, the historic lack of trust between the nations, a change in the South Korean government and lack of positive leadership, both internally and internationally, has seen the relationship deteriorate.

2006: President Bush names North Korea as part of the axis of evil. In October, North Korea states that, due to growing intimidation by the US, they will stage a nuclear test that month and a second in 2009.

2009: North Korea walks out of international talks aimed at ending its nuclear activity and announces it no longer considers itself bound by the terms of the 1953 truce.

2010: The south accuses the north of sinking one of its warships and cuts off all cross border trade. The accusation is strenuously denied and the north severs all ties with Seoul. The US then imposes tough sanctions on the north. During a trip to China in August, North Korea’s Kim Jung Il signals a willingness to accept foreign aid to help cope with major flood damage.

2012: South Korea hosts the second Nuclear Security summit. The gathering of 50 nations is attended by President Obama, who hosted the first summit in Washington in 2010. North Korea condemns the South’s hosting of the event as ‘an unpardonable crime’ and an ‘intolerable grave provocation’. During the summit, the south mobilises more than 40,000 police and an unidentified number of troops to guard against possible provocation by North Korea, terrorists or demonstrations by its own citizens.

The United States has 28,500 troops based in South Korea. As a direct result of US pressure and with massive American funding, South Korea is constructing a naval base on the island of Jeju to berth Aegis warships, 38 of which form part of the US missile defence system.

Named the Island of Peace by the late President Roo Moo Hyon, Jeju was the site of a massacre where more than 30,000 civilians were estimated to have been slaughtered by the South Korean army during a 1948 uprising. 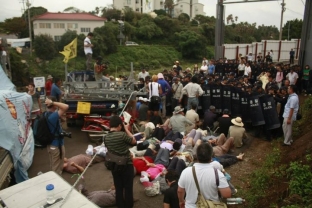 The high biological diversity, unique volcanic typography and local culture of Jeju attract many tourists but building the base will be hugely detrimental to the environment (notably its coral reefs), threatening the livelihoods of local fisherman and many related jobs.

Located strategically in the Korean straits, the construction of a naval base would considerably increase the island’s potential to become a military target in the event of an armed conflict.

Many observers believe Jeju naval base will serve the sea-based component of the US ballistic missile force.

‘’I am moved and impressed that residents near the coastline have been waging a fierce, non-violent struggle to stop the base. They’ve used their bodies to block bulldozers and cement trucks, sacrificed their personal freedom, been beaten and imprisoned and paid heavy fines… I think the least environmentalists, peace activists and supporters of democracy can do is express our outrage.’’

In September, the International Union of Conservation of Nature (IUCN) held its World Conservation Congress with some 8,000 attendees on Jeju, throwing the spotlight on the bitter battle over the island’s future.

Missile defence systems on Aegis destroyers are currently being tested at the Pentagon’s testing facility on Hawaiian island Kavai. There is a potential danger of Japan, South Korea and Taiwan going nuclear or having US nuclear bases.

In February, there was good news following talks in Beijing between North Korea and the US, the former agreeing to halt uranium enrichment and the testing of long range missiles in return for food aid.

This agreement foundered on North Korea’s plan to launch a long range missile in honour of the hundredth anniversary of their leader Kim Il-Sung.

While the Koreans claim the launch was linked to the peaceful advance of their space programme, critics suspect it was connected to their nuclear ambitions. Both South Korea and Japan threatened to shoot the missile down if it entered their territory. In reality, however, the launch failed.

The failed ballistic missile launch by North Korea has been condemned by the UN Security Council, including China and Russia.

The unexpected re-election of the conservative Saenuri party in South Korea has complicated matters. As the Saenuri and North Koreans traditionally hate each other, the party is not interested in improving relations and tensions have increased.

While it has not yet developed a ballistic missile capable of carrying a nuclear warhead, it is likely North Korea has more than one enrichment plant. Though a failure, the recent attempted missile launch suggests North Korea is well on its way to developing such a weapon.

Confused messages coming out of the country suggest an internal power struggle, that some elements want better relations with the West in return for food aid while others seek a more militant stance.

Meanwhile, China has been advocating calm in the area. North Korea’s most important ally, biggest trading partner and main source of food, arms and fuel, China has its own internal conflicts between its role as an emerging global player and its commitment to its North Korean allies.

The first six-nation talks since 2008 between North and South Korea, China, Japan, Russia and the US were due to restart in September. Russia allocated one of their top deputies to the talks, showing they are taking the situation seriously. While it seems some informal contacts did take place, these turned into an exchange of insults rather than any constructive dialogue or agreement.

Heads need to be knocked together by Russia and China re the North and the US re the South to make these talks happen and work. The alternative is ever escalating tension leading potentially to military and even nuclear warfare.

A frequent complaint made by North Korea is that South Korea is a puppet regime of the US, which wants it to invade the north. This leads to North Korea pursuing its military First, Second and Third policies, meaning other aspects of society are neglected. This surely is not the way forward for either of the Koreas or the wider Asia Pacific area.

Next week Jonathan Russell will be writing about the wider Asia/Pacific political context taking in developments in China, the US, Japan, other Asian countries, Australia and Korea.