If you are of the opinion that the City Garden Project controversy was all about what flavour of city centre park Aberdeen should have – think again. There seems to have been a much bigger picture involved here, and the politics are murky.  Mike Shepherd writes.

The power of the print media in shaping opinion 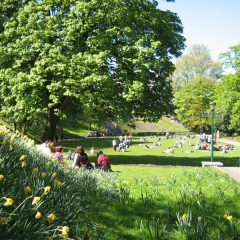 The public referendum has been held, and the City Garden Project won by the smallest of margins: 52-48%. Feelings are still poisonous in the city, as it is clear that a marginal result was swung by dubious means.

On the City Garden Project side, unregistered groups spent a disproportionately large sum of money on campaign material, whereas the officially registered groups were restricted to spending about £8,000 only.

Some of the claims made by supporters of the City Garden Project were outrageous and substantially misleading. One newspaper advert is now being investigated by the Advertising Standards Authority.

Even Aberdeen Council were responsible for punting a justification for the City Garden Project with the questionable claim that a new park could create 6,500 new jobs in the city.

The local papers showed a bias in favour of Sir Ian Wood’s project and framed their reports to show one side in a much better light than the other (“Yes, vote for change” or “No, don’t vote for change”). Ludicrous claims were accepted uncritically – such as oil companies leaving Aberdeen if the scheme did not go ahead.

I had been advised by an expert that:

“You will need the support of a PR company during the campaign.” 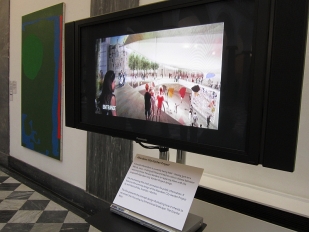 It was very good advice, but in practice not something that a campaign group of limited influence and funds could realistically put in place. Yet, it was clear from canvassing in the street that the combined effort of relentless advertising, the glossy brochures and the press bias was having an effect.
Whereas many would stop and give me a considered analysis of how they would vote, a large minority were reflecting City Garden propaganda back at me, phrases recognizable from glossy brochures or Evening Express headlines.

Our society today is witnessing a battle between democracy and political lobbyists / PR companies. Out of this, democracy is not doing that well. It’s a shock to see this writ large in Aberdeen, but at least the Gardens Referendum result has made this crystal clear to any thinking person in the city.

After two years of campaigning to keep the Gardens, I have been able to observe how local politics works. It is clear that the current council administration is very business friendly and they will tend to make decisions that primarily favour business interests. At just about every council meeting you will hear the phrase “Aberdeen is open for business.”

Local democracy commonly involves a conflict between what business wants and what is in the interests of the general public. For example, if Aberdeen Airport is allowed to land flights at night, Dyce residents will get woken up by the noise. The conflict between business and public interests came to the fore after the consultation on Sir Ian Wood’s scheme two years ago. Over 50 local businessmen wrote to the council asking for the result to be ignored:

‘due to misunderstanding of the project among the public’

and an ‘inability’ to appreciate its impact. The council – to their shame – did this. The current Council administration (an SNP / Lib Dem coalition) appears to favour business almost every time.

There are a number of reasons why business gets its own way with the council. Many councillors are instinctively business friendly and will tend to support projects that are favoured by local commercial interests. This is certainly true of the Conservatives on the council and of many councillors from the other parties too.

There is also a powerful business lobby. Businessmen make up two thirds of the Aberdeen City and Shire Economic Forum (ACSEF), a “public-private partnership that drives economic development in the region”. Funded by both Aberdeen City and Aberdeenshire Councils, ACSEF is a non-elected body that have been given a significant degree of control over local economic policy. There is no doubt that ACSEF exerts power and influence over the activities of both councils.

ACSEF were involved with the City Garden Project in the early days and described it as one of their flagship projects. Two of the board members, including the Chairman Tom Smith, are directors of the Aberdeen City Garden Trust, the group that organised the architectural competition and who hope to take the project forward to completion.

Extensive networking appears to go on amongst the “great and the good”. Politicians, local businessmen, council officials and senior figures in local organisations turn up and meet at parties, functions, charity events and business meetings. One Freedom of Information request gives an indication of how much hospitality is provided to council officials for instance:
http://www.whatdotheyknow.com/request/76531/response/199821

To the worldly wise, this will not come as a surprise. However, advanced societies work by a system of checks and balances between moneyed interests and the public regard. This does not appear to be working too well in Aberdeen.

The SNP and the City Garden Project

The SNP have been intimately involved with the City Garden Project since its inception. Alex Salmond was present at the project launch  in 2008.
http://www.eveningexpress.co.uk/Article.aspx/933616

But only recently have both Alex Salmond and Callum McCaig, the SNP leader in the council, explicitly endorsed the City Garden Project.

Yet, the majority of SNP councillors have supported it throughout (the notable exception being Clr. Muriel Jaffray). This is clear from the voting records every time the project has come up for debate in the Council. The SNP support has been instrumental for the progress of the City Garden Project through successive council votes.

The SNP have a reputation for populist politics and it may seem surprising that they have embraced such a controversial project for the city. I believe that there is a much bigger picture here, and one that takes precedent over local politics. The SNP are essentially a single-issue party; they want independence for Scotland. The realpolitik of the SNP is that much of what they do is focussed towards this end.

A key aim for the SNP has been to secure the support of major business figures in Scotland. This is partly financial; the party has no natural source of funds apart from membership fees, but they are also trying to secure influence leading up to and beyond any independence date. Major businessmen such as David Murray, Brian Souter, Jim McColl and Martin Gilbert have now endorsed the SNP.

Sir Brian Souter, founder of the bus company Stagecoach, caused controversy when he donated £500,000 to the SNP in 2007. Shortly afterwards, the SNP dropped an election commitment to bus re-regulation, although they denied that there was any connection to Sir Brian Souter’s donation.

Sir Ian Wood has not given open support to the SNP, yet the SNP continue to court the billionaire’s favour. Not only has Alex Salmond given his own backing to the City Garden Project, the machinery of Government has also been used to bankroll the scheme.

Scottish Enterprise funded the public consultation two years ago and also allowed grant money to be used for the technical feasibility study. Although the public rejected Sir Ian Wood’s project in the consultation, it didn’t stop Scottish Enterprise from giving Aberdeen City Garden Trust £375,000 of public money from its available funds for major infrastructure projects.

Another niggly problem has been the concerns of Audit Scotland

The Scottish Government are keen to provide investment money for the project through TIF funding. Yet it has been established that the initial proposal did not rank very highly by comparison to other investment and infrastructure projects elsewhere in Scotland.

The Scottish Futures Trust, who carried out the ranking, has refused to make their calculations public in spite of Freedom of Information requests to do so. Another niggly problem has been the concerns of Audit Scotland, who have questioned the long term capability of the indebted Aberdeen Council to pay back a risky loan for the project.

The proposed use of valuable investment and infrastructure funds for something as trivial as building a new park is shocking. The business case is dubious and the council can’t afford the risk. Political considerations seem to have taken precedence to a strict business evaluation on the Aberdeen TIF case.

Sir Ian Wood discussed independence recently and gave an indication of what he wants from the Scottish Government:

“The Wood Group will not endorse a Yes or No vote on independence. But Sir Ian added: “What’s key is the extent to which our clients, and to some extent ourselves, anticipate that a Scottish Government would continue with a similar oil and gas policy to the UK.

“What’s important – and I think the First Minister realises this – is that they must provide as much clarity as possible over the next two years towards the vote in 2014, so that we minimise the uncertainty.”
http://www.scotsman.com/captains-of-industry-and-finance-join-clamour-for-clarity

I have no doubt that this will happen.

The SNP are hoping to secure a majority at the council elections on May 3rd. This is possible, but as a one-issue party they tend to do better in national elections than local elections. They are also heavily identified with the Union Terrace Gardens issue and this appeared to have cost them votes in the Scottish elections last year.
https://aberdeenvoice.com/2011/05/the-election-the-utg-effect/

If they do not get a majority, this raises the intriguing possibility of an administration run by a Labour-SNP coalition. The Lib-Dems are likely to see their vote collapse outside the West End of the city. The Labour group are vehemently opposed to the City Garden Project and it could be that a condition for agreeing to form a coalition is that the scheme is dropped.

The “Union” in Union Terrace Gardens refers to the union of the United Kingdom and Ireland in 1800. Perhaps it is ironic that the park has ostensibly become a pawn in the big game of Scottish independence. It would be immensely sad if this was the case. Aberdeen’s heritage could end up sacrificed for the sake of political wheeling and dealing.

This would not bode well for a future Scotland. As Paul Scofield, playing Thomas More, said in A Man For All Seasons:

“I think that when statesmen forsake their own private conscience for the sake of their public duties, they lead their country by a short route to chaos.”