Next Friday (March 2nd) we will know the fate of Union Terrace Gardens. The results of the public referendum will be announced then. Will there be wild celebrations in the park itself or will the champagne corks be popping in the boardrooms? writes Mike Shepherd.

The Importance of Union Terrace Gardens 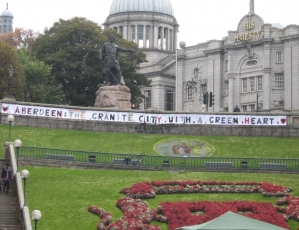 I agree with the comment that in your mental map of Aberdeen, Union Terrace Gardens is at the centre of it. This observation gets right to the core of the controversy.
I’ve heard Sir Ian Wood dismiss the idea of building a civic square on the St Nicholas site. As far as he is concerned the Denburn is the heart of Aberdeen, and that’s where the civic square / garden should go.

The fate of our park will be highly symbolic for the future of Aberdeen city centre. If you agree to retain the Gardens, it’s a statement that heritage matters in the city centre and there is a will to maintain the historical nature of down-town Aberdeen.

On the other hand by agreeing to build a modern park and structure, this would probably give the green light to extensive development of the city centre. As the TIF business report for the City Garden Project states, the scheme could stimulate the establishment of a central business district and the accelerated construction of city centre office blocks.

The alternative is so much more attractive. With Jimmy Milne’s business fund we could sympathetically restore Union Terrace Gardens at a fraction of the cost. It would be a marker for preserving our city centre heritage.

The Erosion of the Character of the Granite City

My background is geology and I grew up near Rubislaw Quarry.  The geology of Scotland varies so much, it means that each town and city has its own distinctive building stone. This creates a strong sense of place and belonging unique to each part of Scotland.

I was born in Aberdeen and I love the granite buildings with a passion. It breaks my heart when one is pulled down and a concrete and glass box of no redeeming character is put in its place. I would agree with the sentiment expressed in the old Aberdeen City Plan (very tellingly omitted from the new plan that has just been approved):

“The standard of design in new development has been raised as a widespread cause for concern during the preparation of this Local Plan. This is one reason why new development can raise so much hostility amongst the public and this situation must change. The City has such a rich and relatively intact heritage of older buildings that shortcomings of newer ones are all the more obvious. It is necessary to encourage better design.”

The loss of Union Terrace Gardens could be the start of Aberdeen losing its special character as the Granite City. More and more old buildings may be lost, until the city starts to look like everywhere else. This would sadden me immensely.

A Test for Local Democracy

I also see the Union Terrace Gardens as a test case for local democracy. Despite the public referendum, local democracy has failed miserably on the issue. The development of Union Terrace Gardens was imposed on the public from the start with no serious attempt to build consensus. A so-called public consultation was run essentially as a marketing exercise, and when it failed to convince the Aberdeen public, it was conveniently ignored. 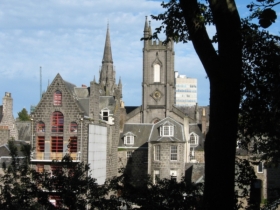 The recently held ‘public consultation’ on the design is remarkable in that the results were not even made public. Even the referendum has been lop-sided, with a massive public relations exercise on one side combined with a local press willing to publish anything it gets. There have been some new lows in recent days (see Richard Pelling’s article on the subject).

Will the public assert themselves against the machine? I hope and trust they will. If not, expect much more of the same.

A Waste of Public Money

Recently I received an email from the managing director of an oil service company in Aberdeen. He described the idea of using Central Government funds for the City Garden Project as a terrible waste of investment and infrastructure money. His opinion is that the city centre development will not affect the decision by oil companies and personnel to move to Aberdeen or otherwise.

“Companies invest in Aberdeen because of the fantastic talent pool, the high standard of living, the stable fiscal regime (assuming Osborne doesn’t have any more surprises), the access to West Africa and other merging oil & gas regions which are increasingly supported from Aberdeen.”

I agree. What is calamitous is that if Aberdeen Council was going to apply for TIF funding, they could have found much better projects than Sir Ian Wood’s city garden. How about these:

a. Revamping the Beach area

– And just about any other project you could think of.

If the City Garden Project goes ahead, we will have replaced a park with a park. Is this what we should be doing with public investment money in Aberdeen? Most certainly not.

If you agree with any of this and you haven’t voted yet; vote Retain Union Terrace Gardens (the option that does not destroy our Granite City).