A lecture by Charles Renfro, held at the Robert Gordon University, Tuesday the 14th of January. By Jeremy Millar. 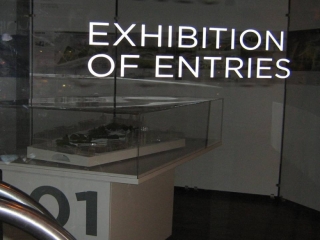 I pulled on my black turtleneck and picked up my Mac book pro and set off for the lecture. Would I be mistaken for an architect; yes I was – it’s all in the attention to detail. The theatre was pretty full, with architecture students to the back, and bolder interested parties to the front. Charles Renfro is an engaging character – think Niles Crane amalgamated with Andy Warhol.

He had flown in especially for this event, and encountered the usual techie difficulties in getting his gleaming Mac book pro to talk with a PC campus. The lecture was a run through of a number of the DS+R projects, and very impressive it was too.

At their heart DS+R are artists, often very clever and imaginative conceptual artists. This approach is exemplified by the ‘blur’ installation on lake Neuchatel in Switzerland. This brought to mind ‘Smoke on the Water’ for some reason. This building was a folly in the architectural sense and Charles spoke of playing with the senses as the visitor entered the water cloud and saw nothing. Like many of the DS+R projects there is an element of passing through, rather than destination.

The revolving trees in Liverpool are another witty play on perception.

Understandably the main focus of the lecture was on the High Line project in New York. I have to say that I was a fan before, and now I am even more so. This project demonstrates all that is great about urban design. It involves people with their environment on so many levels. There are many small spaces along the route that offer opportunity for performance. There is a sense of people owning and playing up to the intimacy of these spaces. If it is not to your taste – well you can just move on. It was, however, sooo New York – and I was reminded of “just a New York conversation rattling in my head”: thanks Lou.

a walk-through video that involved much playing of the bagpipes

I was impressed by the way in which the High Line acknowledges routes and roots, and builds in memory of decay and goes wild. Charles is keen on letting the DNA show through and inform the evolution of the space. He ably demonstrated this with the Lincoln Centre and the new Rio gallery designs.

Loving what I’ve seen so far, in that it is visionary, interactive and accessible.  These projects are also all in large metropolises with sophisticated urban elites, and large numbers of tourists pretty much the year round. There is no question that I would visit if in New York, Rio or Boston.

And so onto the ‘City Garden Project’ for which Charles launched a walk-through video that involved much playing of the bagpipes. The key words and phrases included diversity of ecology, ideas pulled from existing context (that DNA concept) sustainability, green lung, reconnecting the city, reinforcing heritage moments, keeping topographic interest; and I have to say he lost me.

I could see some of the connections to the successful DS+R projects, but this vision betrayed a fundamental absence of an understanding of what makes Aberdeen unique both architecturally and culturally. The DNA of Aberdeen city centre is in the crisp Victorian lines of squares, crescents and terraces. The grand public buildings echo a past of commerce and culture as one strolls down Union Street.

The visual dominance of ‘education, salvation and damnation’ overlooking the gardens and leading the eye round to the gallery are rightly flagged up in guides to the city.

The gardens as they stand reveal this DNA and tell Aberdeen’s story. Charles in his presentation showed photographs of this evolution, the exposed Denburn, the trains pulling into the station, the bandstand and the vistas beyond. This legacy would be obliterated, and as for the DNA, we would have some balustrade and two statutes. I would defy any visitor to read the city from the perspective of the Web, unlike the active interpretation gained from a stroll along the High Line.

Granite is what makes Aberdeen noteworthy. The city centre is a symphony of granite. Apart from the granite in the name of the Granite Web it barely features in the design. The talk of the eye being drawn to new perspectives is compromised by the edifice of the Web blocking views towards the Theatre and the Terrace. The parade of arches under Union Terrace barely feature in the walk through.

The biodiversity of the various garden spaces are for me messy and confused. The High Line took it’s planting from the wild flowers that colonized the derelict line and the wildness was utilized to great effect. The current gardens are formal with wild edges and they reflect a city rightly famed for this form of planting. If people want to experience the Scot’s pine they can catch a bus to the Duthie Park. We have parks for all tastes and occasions in Aberdeen. There is no need to create a microcosm of the northeast in the city centre.

There was time for a few questions. A question about the merits of consultation with the public gained an acknowledging that this had not happened, although there was an awareness of the controversy. DS+R worked to the brief and they may consult more widely if the referendum is successful. There was no acknowledgment of contact with heritage groups at any stage of the process. Charles has made four visits to the city and feels he is getting to know it.

A question about the profile and presence of the arena space referred to as the ‘butterfly’ draws on the restaurant at the Lincoln centre, and both attempts to sit in the landscape and be iconic. There was an acknowledgement from Charles that this is a work in progress and they will get it perfect.

There was a question about sustainable build and climate change. Charles said that the build will reach the highest standard and will probably be the first in Scotland to do so. He talked to the advantages of green roofs for maintaining ambient temperatures. He did not address the concrete involved in the build, but did say that he was given materials to work with.

A further query focused on the tunnel through to the station. Charles was clear that this is not part of the project, but the Web would provide the opportunities for others to take these developments forwards. The man from Keppie spoke of connecting with the harbour and opening access to Aberdeen’s other areas in 10, 20, 30 years. He added that the project is about creating an identity for Aberdeen going forward.

Make Union Street a cultural space and preserve the gardens

A question followed which addressed scale of the design and queried the numbers of people required to make the space work. The observation that Aberdeen was not New York was made.

Charles interestingly responded by reference to walking on Union Street and having to ‘fight’ people off. He went on to claim that the Web would provide the space for people to escape Union Street, which he acknowledged was dying, with the malls draining the energy away.

He then went on to claim that a range of cultural programming would attract people to the Web. It would be a melting pot for all the different populations that are around. In a further observation about walking down Union Street in the rain, he wondered why the ‘sidewalks’ couldn’t be bigger.

The final question was the magical one, and asked Charles that knowing what he knows now and if given a free rein to develop a project – would he go for the current one? The answer was of course, absolutely. He then returned to his battling down Union Street theme and made the obligatory one man and his dog in the gardens observation of the usage of the gardens by the public.

So there you have it. For me the most revealing evidence from Charles came with his ‘Why can’t the sidewalks be bigger’. In looking into the tranquil sanctuary of the gardens from the bustle of Union Street he was blind to the answer beneath his feet. Pedestrianise Union Street: create a space, a green corridor that revitalizes the Street; brings together all the successful elements of his other projects, preserves and lets the DNA speak. Make the Street a cultural space and preserve the gardens – subject to access improvements and recreational attractions – as the sanctuary within the hustle and bustle of ‘downtown’ Aberdeen.

The final train journey along the High Line delivered turkeys to New York for Thanksgiving.