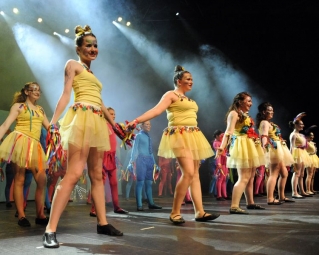 The AECC was alive with the sound of music as the region’s academies went head to head in the Aberdeen Rock Challenge heat.
Pupils from Hazlehead, Bucksburn, Mackie, Kemnay, Turiff, Westhill and Fraserburgh, along with premier team Peterhead Academy, danced it out on stage to win one of three coveted places in the first ever Scottish final. Opening the show were first time entrants Hazlehead Academy.

“I felt that Rock Challenge was something that Hazlehead Academy really ought to get involved with as it brings children from all different year groups together. And by setting them a goal they all try to achieve better things.”

“This was my third Rock Challenge. I love the atmosphere with all the schools getting involved. Backstage when you’re waiting to go on it’s really really exciting, that’s what I like about it all. And getting ready to go on, that’s a big part for everyone here, just because you’re hyping up, it’s a great feeling. “

“I am so proud of them because they’ve done it all themselves. They’ve created their own ideas and they’ve danced their hearts out. They’ve just put everything into it!”

The idea behind rock challenge is for students to be at their best without any stimulants, but rather to get a natural high from being together and working together as a team. Pupils are also asked to sign a pledge that during the time they are working on Rock Challenge they won’t take part in drugs and alcohol and are going to lead a healthy existence.

“There have been very positive knock-on effects in the school as a result of taking part in Rock Challenge,” added Ms Milroy. “We have pupils who are attending regularly at school because of this activity and making this a focal point in their week, and it’s very evident that they are thinking more about their bodies and how they need to be healthy to take part.”

“It was quite fun because it pushed my acting to the limits,” he explained. “By playing it melodramatically and very big I was able to portray to the audience that it’s not a good thing to be doing, and hopefully encourage others not to abuse alcohol in that way.”

Rock Challenge in Aberdeen has had longstanding relationship with Grampian Police, who have sponsored the event for the past 10 years. Karen Simpson, Youth Diversion Coordinator at Grampian Police enthused:

“I love Rock Challenge, and I think that it is just amazing that the young people are given an opportunity to perform in a venue like the AECC. The teachers are there just to guide them, all of the hard work that you see up on the stage is all their own, and the performances we see just get better and better each year!”

“This year there was so much hype on Facebook and Twitter before the event we knew it was going to be a bit special and the teams certainly didn’t disappoint. The standard at the Aberdeen event was exceptional and the atmosphere throughout the entire day was absolutely electric. It was a perfect way to round off our time in Scotland and was a fantastic showcase of talent of young people in the North East of Scotland.”

“The news of the first ever Scottish final was a huge incentive for young people to be their best and I’m looking forward to seeing the performances again in Dundee.”

Walking away with the winning position from the Aberdeen heat was Fraserburgh Academy, who will be joined by runners-up Westhill and Kemnay for the Scottish final in Dundee in June.