The Aberdeen and Grampian Chamber of Commerce recently issued a report with a series of articles where invited contributors were asked to give their vision for the future of Aberdeen city centre.  Mike Shepherd was intrigued by the following contribution from Maitland Mackie, ice cream manufacturer and farmer. 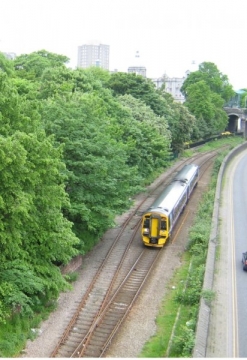 “What a wonderful opportunity to do something splendid! It’s not every day that a City gets offered a £50 million present to spend on a beautification program. Sir Ian of course has had a big vision for the Union Terrace Gardens for over 20 years.

“I remember him well, talking the then new Grampian Enterprise Board, Ian was its first chairman, into spending £800,000 to ‘pile’ the base of the new road and underpass, “in case the City wanted sometime in the future to cover it over and develop the gardens as a core of the City Centre ”. How’s that for long-term planning!”

The invitation to tender for the technical feasibility study (2008) gives a different figure.

“In 1996 proposals were so advanced that Grampian Enterprise Ltd (part of Scottish Enterprise) and Grampian Regional Council funded 1.65M to build reinforced structural piling into the central reservation of the Denburn Dual Carriageway, to support a future decked scheme.”

A news article in The Herald written in 1996 gives details of the proposed Millennium Project for Union Terrace Gardens.  This involved decking over the road and railway but leaving the park largely intact. The project failed to get funding. It mentions in passing that proposals for Union Terrace Gardens had been drawn up three years previously but the new plans “are nearly half the cost of the original.” The location of the structural piling is an issue. The Halliday Fraser Munro Technical Feasibility Study contains the following:

“Fairhurst’s were the Civil & Structural Engineers on the original design and construction of the Denburn Dual Carriageway. They also coordinated the design of the two lines of piles installed. Unfortunately, despite frequent contact, they have been unable to assist in our search for the information on the existing construction. We were never able to receive confirmation that an archive search had been complete.

“Action: Scottish Enterprise to contact senior member of WA Fairhurst Engineers to again request an extensive search of their archives is carried out.

“Contact: John Hollern – Planning Manager, Morgan Ashurst.   Discussion was held over several conversations on the phone. The aim was understand what Morgan Est knew of the construction of the Denburn dual carriageway, the piles to the reservations and the associated foundations.

“John confirmed that Amec Piling (now part of Morgan Est) completed the piling works. Sandy Anderson worked on the scheme and still works for Morgan Est. Sandy confirmed to John that he remembers completing the mini piling work between the railway and the northbound road carriageway. He also confirmed that he completed the culvert diversion to the route and material type suggested on the WA Fairhurst drawing. John outlined that Sandy does not remember completing the piling works between the north and southbound carriageways of the road. John offered to search their archive for any records of the completed works.

“Actions: Morgan Ashurst to search their archive for construction information of the Denburn dual-carriageway, mini piles to the reservations and associated foundations.” http://www.acsef.co.uk/uploads/reports/16/2009%2006%2012%20-%20Final%20Report%20Appendices.pdf

Thus it appears that £1.65million of public money has been spent on preparation work for a ‘vision’ that may or may not happen and nobody seems to be too sure where all the piling was placed anyway. This is not a good start for a project that many believe will be a waste of public money if it ever comes about.