The results of Aberdeen Cycle Forum’s annual cycle count show a big increase in levels of cycling in the city. Derek Williams, chair of Aberdeen Cycle Forum told Aberdeen Voice, “Aberdeen‘s commuters are increasingly turning to pedal power. People have been saying that there seem to be more people cycling and this has been confirmed by our count. This is a very impressive year-on-year increase.” 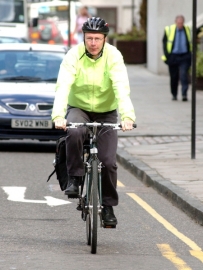 The number of cyclists recorded during the morning rush hour at sites across Aberdeen rose by 18% compared to 2010. The busiest location was King Street, followed by Union Street and the Deeside Line.

ACF has been carrying out annual cycle counts since 2008. Cyclists are counted at eleven key locations around the city between 0730 and 0900, the objective being to gain a metric of cycle activity. Since the first count in 2008, cycling levels have gone up by almost 30%.

“Investment in cycling is paying off. The upgrading of the Deeside Line and the cycle lane along King Street are encouraging people to take to their bikes. Measures like better cycle parking and the advance stop boxes at junctions all help too.

“Cycling will also have had a boost as people want to avoid rocketing fuel costs and sitting in traffic queues.”

Aberdeen Cycle Forum is an independent voluntary body set up in 2003 by a group of cyclists and environmentally-aware people who decided that cyclists in Aberdeen should be better represented.

“We believe that Aberdeen can become a truly cycle-friendly city and this count shows we are making steady progress. It is crucial that investment in cycling is maintained.” 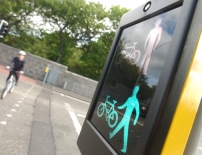 The group’s aim is to encourage cycling – for pleasure, cycling to work and to school, to the shops, off-road or on-road. The majority of the Forum’s work is campaigning for better facilities for cyclists in the city.

It also produces the Aberdeen cycle map and run Try Cycling sessions for those who have not been on a bike for a while. Anyone who supports these aims is welcome to join.

To celebrate Bike Week, the UK’s annual festival of cycling, running from 18-26 June 2011, the regular ACF/Get-About Bike to Work challenge is back.

Employers register for the challenge and compete for the Get-About trophy. Journeys by employees during bike week are logged on the challenge’s website and count towards employers’ scores, there are bonus points to be won for people cycling for the first time.

To learn more and to register, see: http://www.aberdeencycleforum.org.uk/challenge