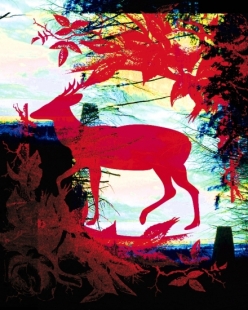 The Roe Buck – A Short Story By Alan Gatt.

He’d just been congratulating himself – it was quite early in the season to feel as fit as he did.

During the appalling winter, his saddle-fitness had declined, but since the spring had come early and bright he’d managed to improve on that.
Climbing the steepest hill he knew in the town; he’d managed it that day with less distress, in a higher gear, quicker and with better form than he’d done so far that year.

Half way up he’d even felt good enough to kick, to dig down into reserves of strength he didn’t know he had – to spin the pedals faster and actually accelerate up the hill.

That hill at the very edge of the parish boundary of his town – quite rural really – up a forestry trail to a summit with an Ordnance Survey concrete pillar trig-point on top and such a view! The hill that gathers the rain that feeds the springs that become the burn that gave his town its name and gave the town the green estuarine littoral to found itself upon all those centuries ago.

Cresting the summit and now on a plateau the cyclist knuckle-flicks the paddle to slip up a gear and relaxes, pleased with himself. Now travelling at about walking pace on the loose gravel path, heading slightly down and dead straight, increasing speed; faster now – jogging pace, faster now – running speed faster again – faster than a runner –  gravel chips pinging poing, boing from beneath chunky, nobbly tyres.

To think: the loose-ish glacially deposited aggregate sand and gravel of this kame hill were water-borne – carried by that burn water; speck by speck, stone by stone down the valley to form that estuary, now reclaimed beneath shopping mall and car park and railway station and road: a perfect flatland for development alongside the harbour – that harbour itself once the shifting sand estuary of a much mightier-yet watercourse, now granite pier and concrete pile contained, dredger-tamed.

Now speeding about as fast as he’d like to go for comfort and safety on the unmetalled surface – any more and his suspension-forks wouldn’t plushly absorb the bumps of the boulder-studded gravel and sand surface – he realises in the quiet of his outreaching thoughts that he’s not alone – something impinges on his consciousness, matching speed and direction – a flicker in the trees: the path now a fully enclosed avenue high contrast light and shadow strobe pulsing through the tree fronds hiding the sky above. Shafts of coppergold light here briefly blinding him through the slatted louvres of the pines – there illuminating the quiet dust of the still forest, suspended in the air, a moment holding its breath.

That flicker in the trees, it’s real, it’s alive, it’s a deer!

On a parallel route, he can see small antlers – a buck! Matching movement through the forest. But the cyclist is a noisy fuss on a forestry road and the roe buck is effortless amongst moss and fern and boulder and  trees, jinking and sidewinding – maintaining smooth forward momentum, muzzle high on this slender neck and with this jet black moist eye regarding and shadowing the cyclist’s progress, the roe buck stays with him – steady.

And then, the path gradient turns positive again, robbing both of speed, but still they shadow one another slowing to the crest, slowing, slowing together, stopping – stopped.

Unclipping one foot from a pedal, the mountain biker stands as still and quiet as he can on the upward-sloping path, and the roe stops too as if somehow robbed of the impetus which earlier made him run. A living-room’s width away, the deer is just inside the margin of the trees; this body parallel to the path, this head turning to the man. A moment of complete silence. A moment of complete stillness.

compared to the roe buck, he was just a conceited dilettante, with all this weird equipment and preparations

This moment – not enough for the man to see too deeply into these deep moist reflective big black eyes. Not enough to make a true mutual connection, not enough. But enough to for him to see that in these black moist eyes here is no human emotion – no way to ever connect.

And suddenly silently these eyes are away! Turning at right angles, the parallel shadowing over, finished – the buck springs with no noise and these slenderest of neat legs over a stone dyke into a grassy field and away swift and down towards the broad valley of the ancient burn. The two part, their paths brought together by coincidence, by providence, now their routes bifurcated and branching away from each other forever.

Standing now alone, the cyclist felt a little ashamed that he should have thought himself fit, that his meaty-thigh-powered steel and aluminium contrivance should have filled him with self-congratulatory regard. For all he prided himself on being an outdoor type; of connecting with the good earth, of living the life of the world – rather than just inhabiting it; now the man realised that, compared to the roe buck, he was just a conceited dilettante, with all this weird equipment and preparations and clothes and planning. A fussy amateur, only playing at being real – only pretending to be outside.

By contrast the deer was the very essence of a self-contained life without superfluity. Lean, slender, light, swift, efficient. Fit and fitting. Truly free.

For, now freed from his brief alien contact with the man, centred wholly and still within his body’s own movement, the buck’s desire line down into the valley is primordial. He is moving without moving, as water flows within itself; the buck cannot be anything other than what he is; he is integral.

Just as without the water there is no watercourse, the deer is self-contained in his looping graceful curved route down across open fields following a path of least resistance with no artifice, no construction, no meaning, no implication. Nothing is wasted and nothing is superfluous. He has neither capacity for understanding any distinction between himself and the landscape through which he moves, nor way of understanding the passing of one moment to the next. For by his existence that understanding would be redundant: he is that landscape; he is that movement; he is that moment – there can be no distinction for all are one.

as these thoughts wandered across his mind, the cyclist realised that he’d lost sight of the buck

Flashing across the field and vaulting… up, hey! Over another dyke at speed the buck somehow remains that silently moving pool of stillness, motionless in his body; moving without moving – completely fit for his surroundings and fitting them seamlessly and essentially.

Providence he is, and he is subject to providence. Here is no human emotion. Here is only motionless motion.

The cyclist stood watching as the buck receded to a speck, proceeding into the depths of the valley and from this high vantage the man’s eyes flickered to the prominences which he noticed stood, seeming sentinels, either side of the valley as it descended meandering eastwards towards the town’s urban centre.

On a hill to the north of the valley, a civic water supply reservoir. Looking for all the world like a truncated pyramid built by an ancient civilisation, the reservoir’s sepulchral forms devised an appropriate reflection to the modernist-style city crematorium which occupied the mirror-slope hill to the south. To the north, life-giving cool water – to the south, death and disposal in flames.

As he regarded the buildings on these slopes, and as these thoughts wandered across his mind, the cyclist realised that he’d lost sight of the buck. Try as he might, he couldn’t pick him out any more amongst the fields and dykes, hedges and copses as they spread out below him in the valley. He couldn’t see whether the roe buck would travel on the north or the south side. He couldn’t see what choice providence had made for the bifurcating future. On one branch, nurture and a plan for the future – on the other, consuming searing erasure; an end to a future.

He re-clipped his foot into the pedal, sighed deeply and pedalled on.