With Thanks To Alan Robertson. 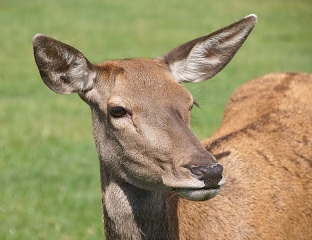 Aberdeen City Council are going to receive a petition signed by over 2,200 Aberdonians calling for the Council to abandon plans to kill 30 deer on Tullos Hill on the outskirts of the city. The wild roe deer are to be killed as part of a council project to create a new woodland and wildlife habitat. Local and national campaigners have condemned the planned cull as cruel, wasteful and unnecessary.

A small delegation of campaigners will deliver the petition to the council at The Town House, Broad Street at 3.30pm on Monday.

Aberdeen City Council Housing and Environment Committee gave pro deer campaigners until May 10th to come up with £225,000 to pay for tree protectors and deer fencing. As campaigners have not attempted to raise this “blood money” it is expected that the Council Housing and Environment Committee will, at their meeting on May 10th, confirm that the deer cull will go ahead.

“We hope that the Housing and Environment Committee will listen to the thousands of Aberdeen voters who have asked them to stop this needless slaughter. There is still time for an eleventh hour reprieve for the deer on Tullos Hill. Aberdeen City Council can stop this shameful act.”

The public consultation that was launched by Aberdeen City Council on 29th October 2010 ( closed on 28th January 2011)  made no mention of the proposed deer cull at Tullos Hill, despite the fact that a delegation from Scottish National Heritage had visited Tullos Hill on 15th November to assess the option of a deer cull at the request of the Council, and wrote to the Council on 25th November.

The letter from SNH makes it clear that, while the public consultation was still active, someone at the City had briefed SNH to steer the decision making towards a deer cull, despite the fact that there are other options. The briefing by the Council to SNH was therefore biased, the consultation was flawed and the handling of both these matters by the Council requires investigation.

The Scottish Society for the Prevention of Cruelty to Animals is completely against the proposed cull, as are other animal welfare organisations, thousands of Aberdonians, and many concerned people living further away. Scottish SPCA Chief Superintendent Mike Flynn said:

“We firmly believe culls should only take place to protect the public or for animal welfare reasons”. He went on to say that: “It is absurd and abhorrent to undertake a cull because it would be too costly to protect trees which have not even been planted. We would suggest these trees should either be planted elsewhere or not at all. Trees should certainly not be planted at the expense of the lives of animals.”

A Facebook site to Save the Tullos Hill Roe Deer has been highlighting the main issues and over 2100 people have signed up to the site.

The fact is, that the Council are not using the normal city-wide procedure for tree planting at Tullos Hill and that is the reason the deer are to be culled. Elsewhere in the City, tree protectors are being used – even in areas where there are no roe deer, and will require maintenance that will cost money; these facts are being kept from the public to make it appear that Tullos Hill is too costly, when in fact it needs to be considered in the bigger context – as part of the Tree for Every Citizen initiative.

The precedent of how tree planting has been handled at Kincorth Hill and other areas of the City, where no deer were culled shows this to be be true.

Aberdeen City Council Housing and Environment Committee at their meeting on 1 March 2011 resolved:

”to extend an invitation to the individuals and organisations who have objected to these deer control measures to raise the sums necessary to provide and maintain alternative measures, including fencing and rehousing of deer, by no later than 10th May, 2011.”

With only days before the decision is taken, anyone who feels strongly about the proposed cull should contact members of the Housing and Environment Committee to forward their concerns.