On Sunday 22 May, people gathered on Tullos Hill for the first of what will be many picnics and outings to protest against Aberdeen City Council’s proposed cull of the area’s roe deer. Voice representatives were there, Suzanne Kelly among them, and she reports. 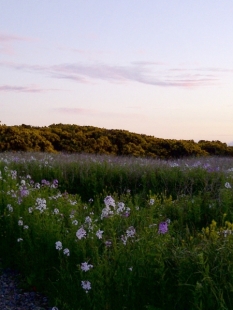 The decision to cull deer for the next several years has caused widespread outrage for its lack of compassion, lack of scientific basis and the complete lack of any kind of democratic process.

People came by car, bus and foot (I got drenched in the rain and some unexpected hailstones – which was refreshing actually) to see for themselves why Councillor Aileen Malone and others insist that deer be killed to plant forty thousand trees.

Within five minutes of hiking up the gentle slope to the Hill, it became crystal clear to everyone present that making any change to this unspoilt, natural paradise would be nothing short of the vandalism that local arsonists are already practicing.

There were around 30 people, young and old and all had an amazing day out, despite gusty wind and showers of light rain.  The hillside was alive with flowering gorse, delicate wildflowers, and the beautiful white and blue Dame’s Violets.  Views of the city were dramatic, and the Baron’s Cairn and other bronze age tumuli reminded everyone that these features are found in few locations anywhere in the world.  This hill is Scottish Natural Heritage embodied and it should be preserved as it is.

The Council used to value this natural resource.  Last year our City Council saw fit to have tours and archaeological talks about this area, and wrote:-

“Tullos Hill has long been known as an important archaeological site because of the four Bronze Age burial cairns there: Cat Cairn; Baron’s Cairn; Crab’s Cairn; and Tullos Cairn, which are scheduled as monuments of national significance”. – Aberdeen City website 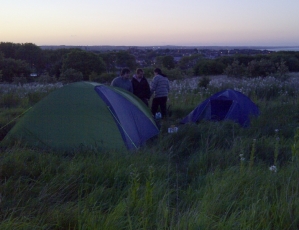 Precisely what forty thousand trees will mean to the area’s archaeology is unclear.  What is clear is that the City has decided the Tullos Hill Roe Deer must be culled (that means shot and killed to you and me) to make way for the non-existent trees.

What will become of the wildflowers and increasingly rare native orchids – and the existing trees which constitute the ecosystem that is already there?  Were these features suddenly less important than planting a tree for every citizen?  No one on the picnic thought so.

I hope these photos will go some way to making people think what is at stake here.  The views are beautiful; the plants and cairns amazing.  Those who stayed all night got fantastic sunset photos as well. 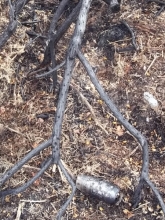 The photos of the burnt gorse are interesting.  Some of our party thought this was normal council burning – but the presence of burnt tins of beer made me think otherwise.

Arsonists have long sought out this area and it is a wonder anything survives at all.  Forty-thousand trees will make an inevitable, eventual conflagration with far more serious consequences than any previous ‘Gramps’ fire.

I personally put this eventual disaster at the door of Ms Malone and Pete Leonard of Aberdeen City Council.

There has been no word forthcoming from our City Council about the misleading consultation, the prejudice of SNH towards lethal deer control, and the undemocratic dismissal of the local Community Councils – and the thousands of petitioners pleading for the deer to be left alone – and hopefully for the area to be respected.  (see other articles in the Aberdeen Voice and other publications for details). 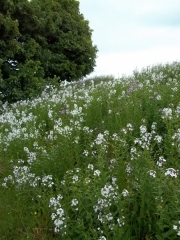 Since Ms Malone – arguably the most responsible party for this ‘tree for every citizen’ scheme – has not issued any explanation for her poor conducting of this affair – let alone an apology to the many people whose wishes and rights have been overwritten – it is time for more action.

I would call on everyone who loves nature to visit Tullos Hill if they can.

If after seeing this site (or just the photos if you cannot visit), you agree it should be left in peace and protected, then please write to your city councillors, your MP, your MSP and MEP and tell them what you think.

I will be sending a letter to the  Council asking for Ms Malone’s resignation.  I doubt my lone action will have the slightest impact, however – if anyone joins me there is some chance this monstrous idea can be halted. The city needs trees – but it also needs Tullos Hill’s unique oasis which supports man and nature in its current form. 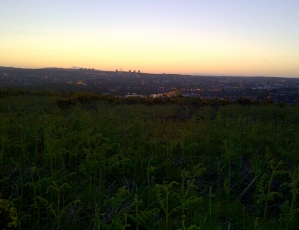 The trees might have made a suitable addition to Loirston Loch’s less windswept fields – but these are now marked for another destructive scheme – a 21,000-seat stadium. That is another story altogether – one which might seem a bit quiet now, but which is assuredly going to be another hard-fought battle.

Our City’s resources are going to the highest bidder with no concern for your wishes or mine. The time to change that situation is now – and the battleground is Tullos Hill.

( Note – To fully enjoy the  photographs, click on the image to enlarge. Thanks To Suzanne Kelly and Clare Rochford for the pictures. )