The Fire Brigades Union’s report ‘Easy Targets’ details some of the scenes their members have experienced. Bricks, bottles, even petrol bombs have been used against emergency services when they have answered calls. Voice’s Suzanne Kelly, with input from Steve Jordan, juxtaposes this sometimes-brutal reality with the excellent global work being done by Florian. 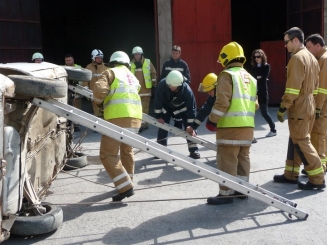 Across the UK, fire-fighters and ambulance crews risk their lives every time they race to answer an emergency call.  They rarely know exactly what they will face until they get to an incident scene.

There might be a raging fire, serious hazards and risks to cope with, and casualties may well be in the middle of such scenes.

As if it weren’t challenging enough dealing with fires and casualties, there is a very real risk of being attacked by mobs armed with bottles, bricks and weapons. This is the reality for fire-fighters and ambulance crews in the UK today.

As if the risk of physical assault wasn’t bad enough, the proposed budget cuts are nothing short of an assault on essential life-saving resources provided by the emergency services.  The Union describes the proposed cuts as:

“… nothing short of a full scale ideological onslaught on the fundamental principle of public service” (Fire Brigade Magazine, October 2010
http://www.fbuscotland.org/documents/Cuts%20campaign/magazine_october_2010.pdf

People trying to save lives in the UK are, sadly, not given the resources and support they need.

Against this backdrop of problems, there is a group of volunteers determined to make a difference in poorer countries – countries which desperately wish they had the resources we in the UK take for granted, and even abuse. These volunteers provide training, gear and equipment, and are Operation Florian.

According to Operation Florian’s brochure, Florian was established in 1995;

“It is a UK Fire Service Humanitarian Charity working to promote the protection of life amongst communities in need worldwide, by the provision of equipment and training to improve fire fighting and rescue capabilities.”

Its roots are in the aftermath of the Bosnian war in which that region’s infrastructure was severely damaged. Fire-fighters from Manston were visiting the town of Split; they had been invited to help identify the way forward and see what could be done. 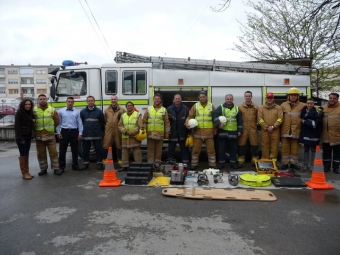 During this visit, a serious fire broke out near the town. There were simply no means to fight the fire successfully and acres of forest and buildings were lost. The visiting fire-fighters decided they had to help, and Florian was started, named after St. Florian, the patron saint of fire-fighters.

The first fire fighting truck sent abroad by Operation Florian volunteers is still in service today. It was clear in those early days that much more help was needed.

The charity is run purely by volunteers from the emergency services. Activities include fundraising, training, and supplying equipment and protective gear. When a project is identified, equipment is found, often from local authorities or sales. Everything is tested before being sent abroad, and training is always provided.

The Grampian Fire Department carried out an important project for Florian in Macedonia in 2007. A team of six Grampian area fire-fighters delivered four trucks and spent weeks training the Macedonians. In total, Operation Florian has delivered

Steve Jordan of Operation Florian, who was recently awarded an MBE for his services to Macedonia,  stated:

“It is vital that the work of Operation Florian continues, not only in Macedonia but across the world. I am most grateful to Grampian Fire and Rescue Service volunteers who have carried out valuable training and donated vital equipment. This year, the volunteers have carried out Road Traffic Collision training in Delcevo led by Alan Davie from Grampian Fire and Rescue Service. I would like to thank all at Grampian for giving up their time to help others within deprived communities across the world”.

Fires destroy wildlife, property, and people and ruin lives and families. Anyone who is willing to risk their own neck, time and time again, to save others deserves all the support we can give them.

If you have any help you can give Operation Florian be it funding or skills, then please do get in touch at 01304 617859 or www.operationflorian.com