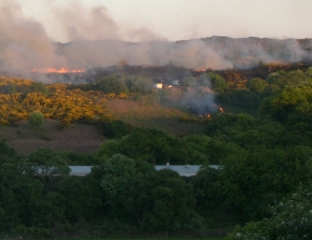 Two separate fires broke out on Tullos Hill on the evening of Wednesday 18th May from around 8.30pm until the Fire Brigade brought them under control approximately an hour later. The fires were at either side of the hill and one of the fires stretched across an area I would estimate to be approximately 200 metres.

Despite the fact that both fire outbreaks were on green gorse land, the recent dry conditions allowed them to spread extremely quickly. Had conditions been different with a prevailing wind to assist, the blazes may have covered a far greater area at speed and caused more extensive damage.

There has been a history of wilful fire raising on the hill. At present this results in brush fires. The Fire Brigade have estimated that in one summer the cost to their service was in excess of £35,000.

These latest incidents raise further concerns about the viability of Tullos Hill for the proposed planting of 40,000 trees by Aberdeen City Council in their plan to turn the area into a forested area designated Diamond Wood status by the Woodland Trust. Should a similar fire or fires start in a large forested area, as proposed by the Council, the potential for a large scale blaze across a vast area of Tullos Hill would appear to be a real possibility.

Worryingly, Tullos Hill is an area where methane gas, produced by the decomposition of buried waste, is vented from underground using special equipment that is spread across the entirety of the hill. The potential combination of a large forested area and the continual venting of highly flammable methane gas could present a major risk to the surrounding industrial estates if a large forest fire was to take hold.

71 fires occurred in 2006 according to Grampian Fire And Rescue Service – down from 132 in 2005.  This reduction has come about as the result of a range of measures undertaken by the Fire Service in partnership with Police, the local community, schools and media.

However the incidence and potential risk of fires on Tullos Hill will be exacerbated if the proposed extended forestation were to go ahead and this further calls into question the Council proposals to plant a large number of trees in this area.