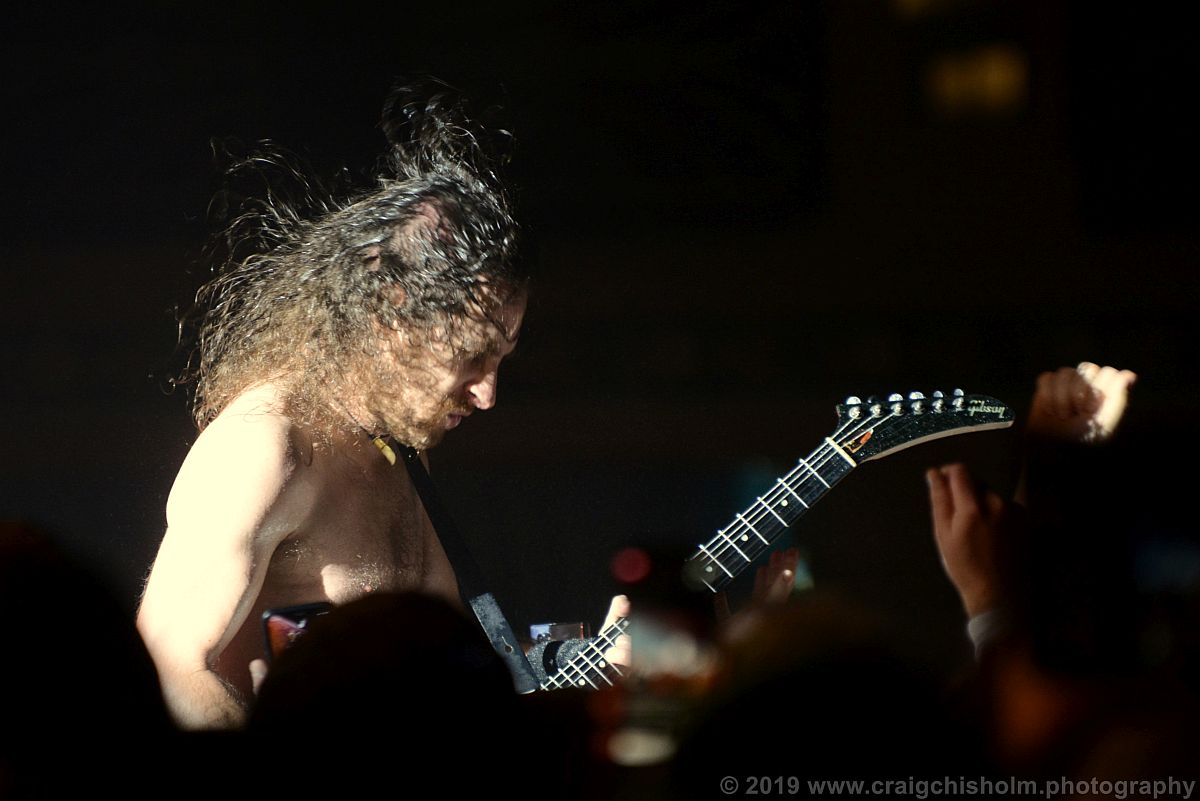 Lugs were left ringing after the historic Beach Ballroom was shook to its foundations with a night of ass kickin’, high voltage rock n’ roll.
Headliners Airbourne took their latest tour to Aberdeen with support from Tenessee rockers Tyler Bryant & the Shakedown and up-and-coming Sheffield band Cellar Door Moon Crow.

Cellar Door Moon Crow are the musical anomaly on the night.

They play a rock / rap hybrid that’s reminiscent of the Beastie Boys around the period of ‘Licensed to Ill’ where monster riffs from bands such as AC/DC, Black Sabbath and Led Zeppelin were sampled and rapped over to create a template that has endured to this day.

Indeed, AC/DC and Led Zeppelin snippets and samples can be heard throughout Cellar Door Moon Crow’s set along with nods to Neil Young, Frank Sinatra and Steppenwolf. The duo – hirsute brothers Phil and Tom Goodwin – get the crowd going with their eclectic set and seem to win over quite a few of the uninitiated.

Their debut album ‘You Got This’ is available now if you want to check them out.

Tyler Bryant & the Shakedown are a more straight ahead proposition that look to have a few fans in the audience already, judging by the reaction they receive. 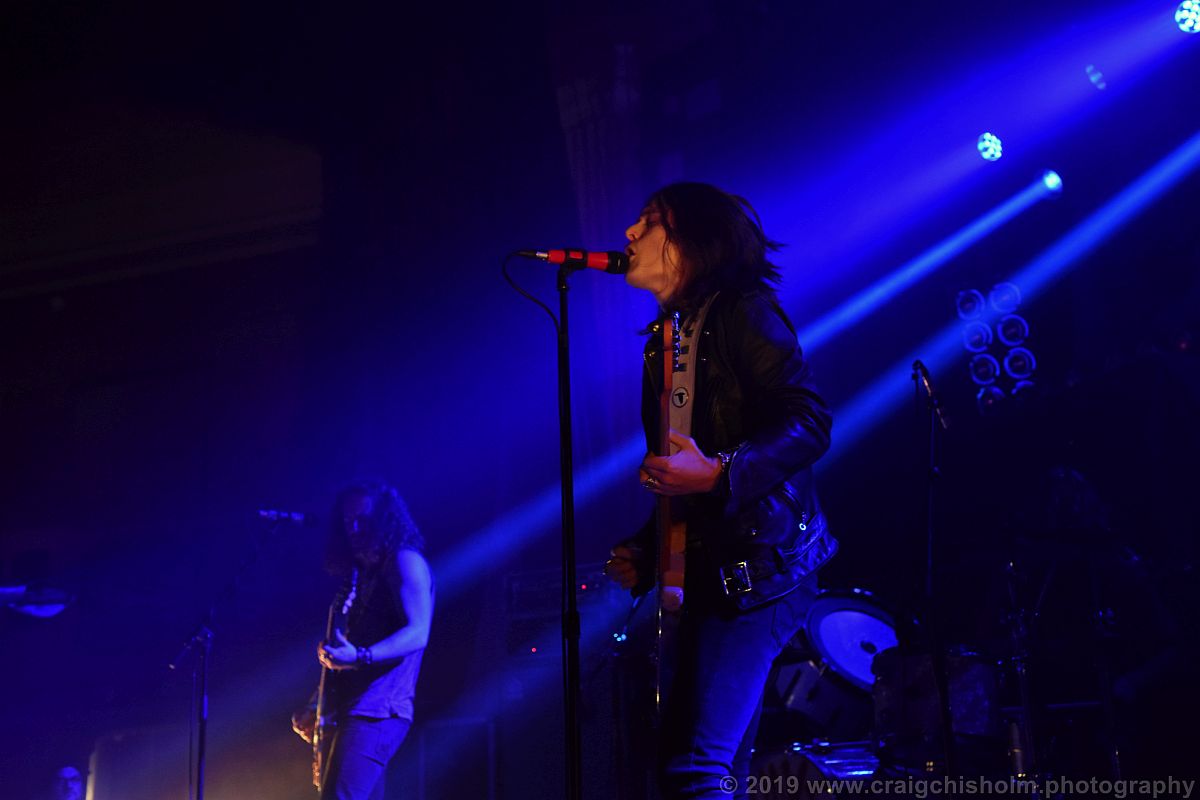 The play a boogie-infused style of rock n’ roll that is hard edged and blues based. It’s heavy on incredibly talented guitar theatrics that will appeal to musicians and anyone that appreciates good musicianship.
A couple of the tracks tone down the histrionics and are more subtle, swampy and bluesy. These are the most interesting in my opinion. But the four piece band – including Graham Whitford, son of Aerosmith’s Brad Whitford, on guitar – go down an absolute storm with the audience with whatever style they play.

By the end of the set the drummer is on the barrier, leaning into the crowd, bashing out a rhythm on a drum and the place is going wild.

If the venue is at boiling point by the end of Tyler Bryant’s set then it is overflowing when Airbourne take the stage.

The Australian band are the latest in a long line of hard rockin’, hard drinkin’ bands to emerge from the Antipodes over the years. Their lineage can be traced back through bands such as Rose Tattoo, Cold Chisel and, of course, the mighty AC/DC.

Audience interaction is key to their set – four songs in and lead singer Joel O’Keefe is already in the middle of the crowd, astride a roadies shoulder whilst playing guitar and spraying beer over the adoring throng. 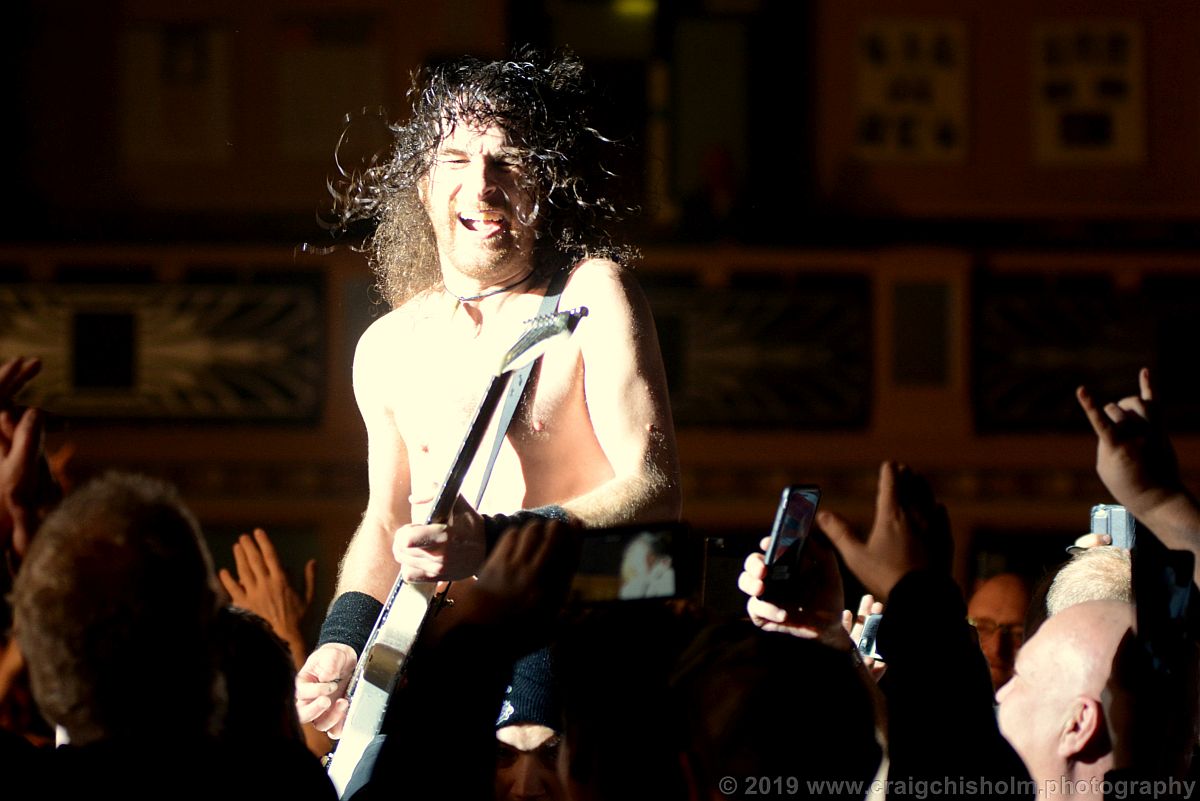 They are a party band and despite it being a Monday night, despite you having work tomorrow you are expected to party with them. Beers are shared with the crowd – albeit thrown to fans on their companion’s shoulders – and the floor of the venue is reduced to a sticky mess as sweat and alcohol drip everywhere.

Airbourne are an entertaining live act – it’s not serious, there are no pretentions and the fans are treated with a friendliness that draws them into the band’s world.

Raise the Flag
Too Much, Too Young, Too Fast
Burnout the Nitro
Girls in Black
Backseat Boogie
Bottom of the Well
Breakin’ Outta Hell
It’s All for Rock ‘n’ Roll
Boneshaker
Live It Up
Stand Up for Rock ‘n’ Roll