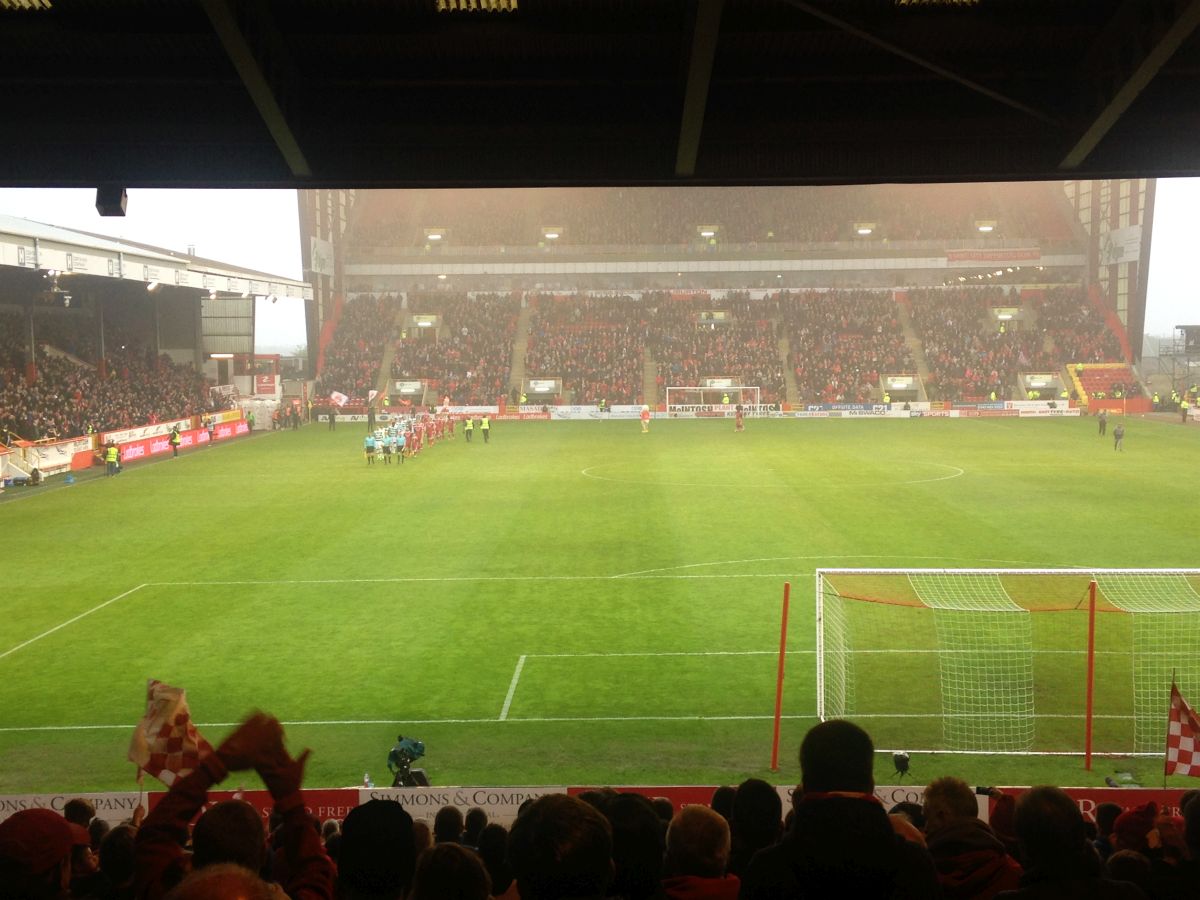 Inevitable changes were made, with Peter Pawlett and Ryan Jack both injured, and Ryan Christie ineligible to play.
Anthony O’Connor made a rare start in midfield, whilst, surprisingly top scorer Adam Rooney was benched, and his place taken by Jayden Stockley.

A decent crowd  turned up for this Friday evening game.

This was the final game of the season at home, the final BT commentary by locally born Derek Rae, the last game that Niall McGinn and possibly Ash Taylor in front of the home fans, and my final match report for The Aberdeen Voice.

The haar was beginning to hang about as referee Stephen McLean got the match underway. Minutes in, Joe Lewis was called upon to make a decent save from Patrick Roberts after he got the better of Andy Considine. From the resultant corner taken by Leigh Griffiths, Dedryck Boyata headed the ball into the net for the visitor’s first goal. A perfect start for Celtic, not so for The Dons.

Seven minutes later, Callum Mcgregor fired a ball which Shay Logan blocked well, but Stuart Armstrong reacted quickly and flicked the ball into the net. The defence didn’t seem to be coping at all well with the pace of the champions.

Just as the fans were still shaking their heads over the state of things, Leigh Griffiths fired a shot from all of 25 yards out. Lewis made a bit of a hash of things, opting to try and palm it away instead of holding it, but he could only look on helplessly as the ball ended up crossing the line for goal number 3.

Things didn’t look good for the injury hit men in red, and one two fans, even this early, decided to call it a day. More fool them.

These ‘supporters’ would have barely left the confines of Pittodrie when, man of the match, Jonny Hayes, shot in the goal of the game, curling the ball in from outside the penalty area on the right, and straight into the top left hand corner. Much to the dismay of keeper Craig Gordon.

From such a poor and inauspicious start, in a game that means nothing other than pride, the match was pretty much turned on it’s head by this.

Moments later a fine and deep cross from Kenny McLean found the unmarked Stockley. His back post header should have gone into the net, but the tall striker’s attempt went inches wide of the target.

Aberdeen had their danders up, and kept the pressure on the team from Glasgow, with their defence, in my opinion, having to work the hardest they have had to domestically this season.

20 minutes in. first Hayes had a go, testing Gordon, then Graeme Shinnie had a shot, which he maybe should have hit better. Ten minutes later, McGinn forced the Scotland keeper to concede a corner. The Northern Irishman took the set piece himself, but Taylor could only head the ball into the side netting.

It wasn’t one way traffic though, and Mark Reynolds, then McLean had to look sharp to deny the visitors adding to their tally. Boyata still looked dangerous when up front.

Defender Jozo Simunovic looked a bit slack, and McLean should have at least hit the target. Instead his curling, left foot shot went wide. A free kick to the Dons just 2 minutes before half time was cleared forward by the visitors, and it ended up at the feet of Scott Sinclair. But the player of the year had the ball taken off of him by the persistent Hayes.

As the match resumed, Aberdeen continued their positive and determined play as Shinnie chased after a nothing ball and won a corner. Considine then put in a low and fierce cross into the area, but it was too hard and McGinn just couldn’t make contact with it.

The next incident provided the only real moment of controversy of the evening. The referee spoilt a pretty flawless shift from himself when he denied the home team what looked, to all intent and purpose, to be a stonewall penalty. Shinnie was running through at pace to get to a blocked Logan shot when Gordon impeded him. If it had been the other way round, no doubt a foul at least would have been given. This is not the first time that the Celtic keeper has been lucky to escape punishment this season.

Four minutes later an effort by Anthony O’Connor in a crowded box came to nothing. The flag was up for offside in any case.

Celtic had a bit more of the play for a spell, but the Aberdeen defence had well recovered from their period of sleeping by now, and handled things quite admirably.

McLean should have scored a second goal and therefore really tested Celtic’s mettle when he received a pass from, surely next season’s captain, Shinnie. However, instead of aiming for the bottom corner, he chose, puzzlingly, to send it screaming over the bar and into the Richard Donald stand.

With only 20 minutes left the game turned a tad scrappy, and the only chance of note was a snap shot from McGinn which went high. Even pushing Taylor up front, and trying to break down the defence with high balls, pointless considering the height of the visitor’s defenders, failed to produce.

History was made with just 3 minutes of the allocated 4 of stoppage time left, Aberdeen schoolboy, Dean Campbell, made his first team debut, becoming the youngest player to feature for the Dons. Hope he doesn’t go the way of the previous record holder, Fraser Fyvie, and depart the club too soon.

The game ended, and the fans stayed to give the players a standing ovation.

With two games left before the Scottish Cup Final, both away from home, first to The Rangers midweek, and then back down to Glasgow to play Partick Thistle, two fighting perfomances like that will surely stand us in good stead for the trip back to Glasgow for the final.