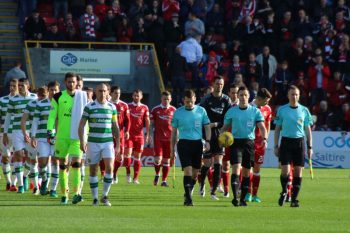 A plague on the powers that be for these lunchtime kick offs. They seem to be getting earlier and earlier.

The league cup semi-final last week was 12.15pm; this game was scheduled for 1200. What next? breakfast time?

Aberdeen lined up without Adam Rooney and James Madison who were on the bench, much to the mystification of the fans, although it was good to see captain, Ryan Jack back.

Two minutes in Jonny Hayes stole the ball and broke upfield but was fouled. The free kick only resulted in Celtic breaking upfield.

In the 7th minute Hayes went down injured, but recovered to carry on. A couple of minutes later Niall McGinn tried to get forward, but Celtic were too strong for the Northern Irishman.

Next, Andrew Considine, concedes a foul on the edge of the box. Even this early, referee Steven McLean, seems intent on not letting the game flow.

Back up in the Celtic box, a great interception from McGinn forces a corner for the home team. The short corner was totally wasted.

As the Dons pushed forward, a strange offside decision was given as McGinn passed the ball forward, then ran onto it himself. At this point it was relatively end to end, fairly entertaining stuff.

In the 24th minute a poor clearance from Shay Logan, falls to Tom Rogic, who fires the ball into the net past Anthony O’Connor.

Three minutes later another Celtic attack is easily dealt with. Not long after that, a careless touch by Hayes, thankfully came to nought.

At this point, with a quarter of the game gone, the visitors were seeing a lot more of the ball; the Dons weren’t closing them down enough, with some slack play from some players, Kenny McLean being the prime culprit.

Some good interplay between Logan, Hayes and McGinn on the left side resulted in a decent ball into the box where Considine made contact, but his header went over the bar.

On the 41st minute, Hayes played a fine ball into the area where Jack got a touch, but it only ended up as a goal kick for the, so far, untroubled Craig Gordon.

Only one minute later the home team had their first shot on target when McGinn swept a good ball in, and that man Considine struck the ball well, causing Gordon to make his first save of the match.

The referee continued to be a tad picky, but ignored a claim for a hand ball by a Celtic player in the Aberdeen goal box and awarded a goal kick instead. Celtic were in possession as the first half ended.

No changes were made by both teams as the second half commenced, and Celtic continued in the same vein as the did before the break. As were The Dons, with poor passing and second to the ball on occasion. Five minutes in Graham Shinnie was booked for, what appeared to be an innocuous foul on a player in green and white.

With 7 minutes gone in the second 45, Derek McInnes made his now trademark move, but instigating a double substitution. Jack, just back from injury, was replaced on the field by Rooney, and McGinn saw on loan player, Maddison come on in his stead.

As the clocked ticked into the 11th minute of the half, McLean missed a ball meant for him, giving the opposition a chance of increasing their lead, but Joe Lewis brilliantly saved the shot from the dangerous Scott Sinclair.

A mere minute later Moussa Dembélé, for probably the first time in the match, was causing the Aberdeen defence problems.

Aberdeen then went forward. A neat touch by Maddison found Considine who crossed to Rooney, but his attempt at goal was off target.

With 16 second half minutes gone, Celts’ number 18, Rojic created another chance for the visitors, but the ball just went past.

Aberdeen then had possession of the ball, and Dons’ right back, Logan, dribbled the 3 or 4 players before bring tripped by Stuart Armstrong.

At this juncture it was fairly one-sided in Celtic’s favour, but the score remained the same. However, with Maddison on the field there was always a chance he could make something happen.

The Dons were causing slight problems for the Celtic defence, nothing too serious. The atmosphere at this point was quite subdued.

Dembélé showed some tricky foot work at the edge of the box, but the close proximity of the defence hampered his shot and another attack came to an end when he shot high over the bar.

A good clearance by O’Connor to Hayes on the left wing, but before he could set off, he was bundled to the ground. Another non -foul.

Considine was looking strong and ever willing.

On minute 33 of this half, there was a bit of a stramash around the half way line involving Scott Brown and Hayes, none of which were involved in the preceding foul. Brown ended up on his back on the ground. The referee handled the situation swiftly and properly, and the two players ended up going in the book and receiving a yellow card apiece, along with another Celtic player who’s foul started this situation.

Hayes took the resultant free kick, but totally wasted it by hooting it hopelessly past the by-line. Set pieces today were particularly woeful.

Not long after that there came one if the strangest clearances I have ever seen. Logan kicked the ball high into the South Stand for a Celtic throw in. It was so high it went through the open window of the T.V. gantry, missing the cameras a sound equipment therein.

Play carried on with a replacement ball and with only 7 minutes remaining of the game to play. Wes Burns, who had been pretty ineffectual, was taken off. He was replaced by Jayden Stockley.

The closing minutes had the home fans literally on their feet as the Dons pressed to get the equaliser, with Gordon at one point snatching the ball off the feet of Shinnie, Maddison taking a couple of free kicks from around the same spot he scored the winner from against The Rangers last month and a call for a handball as Aberdeen kept the pressure up.

The decision was made to add 5 minutes stoppage time. Maybe if there was 10 minutes extra they would have broken through, but the game ended with Aberdeen going down to their second 1-0 defeat in a row. This coming after having 6 victories in a row.

It looks like the tactics didn’t work out as McInnes had hoped, but despite the huge financial gap between the two clubs, the battle on the pitch was a lot more equal.

Many say Celtic could have had a few more goals, but they didn’t. Our defence coped well enough to help prevent that.

In a little under a month the teams meet again in the League Cup Final at Hampden; hopefully the outcome will be different.