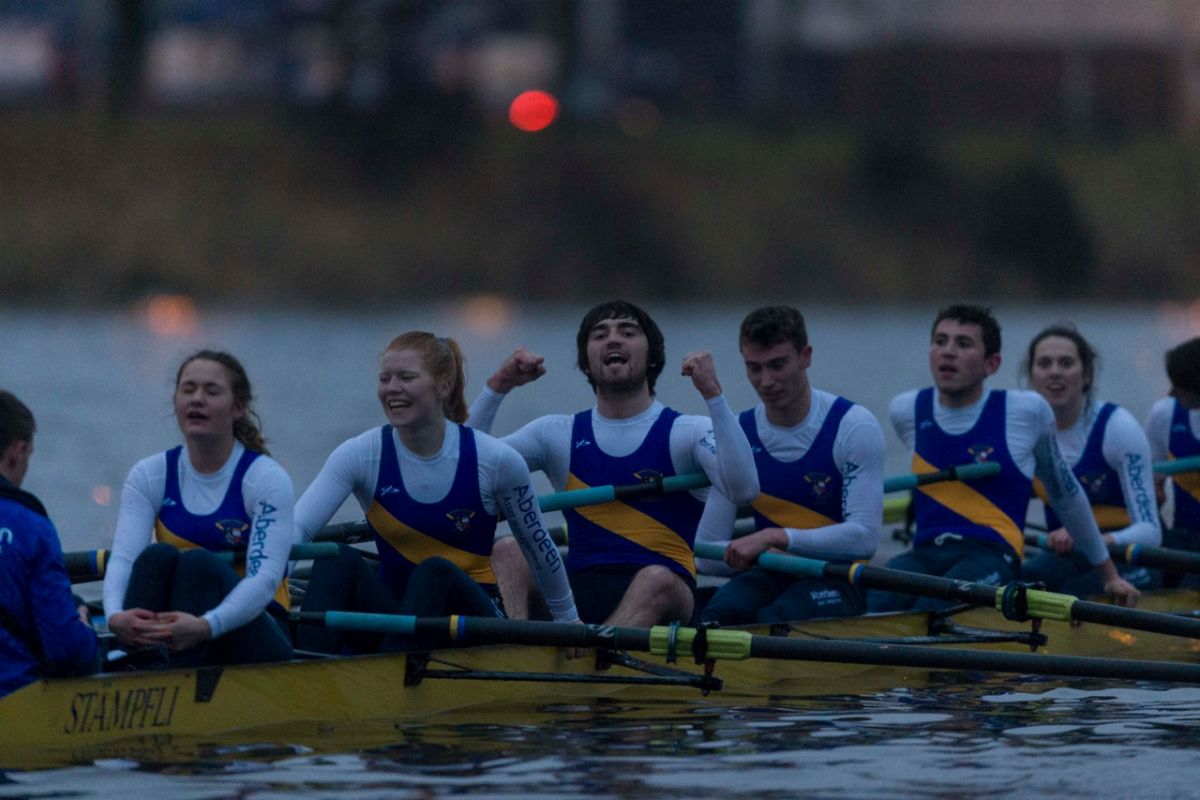 The Robert Gordon University crew followed close behind, with a time of 7 minutes 16.3 seconds.

The University of Aberdeen also celebrated success in the alumni and second crew races – marking the first ever clean sweep in the event’s history.

Hundreds of spectators braved the weather to line the banks of the city’s River Dee to cheer on the teams as the old opponents battled it out on the river. Due to water levels, the 3.5km course was shortened by 300m.

“It feels amazing to have brought the Aberdeen Boat Race trophy back to the University of Aberdeen. I think we’re all still in shock a little; we set out to break RGU’s five-year hold over the title and we did it! I’m incredibly proud of my team and their performance today. We’ve been training hard in daylight and darkness, so it’s brilliant that all our hard work has paid off.

“Erin and the RGU crew were formidable opponents, and made things very difficult for us out on the water. It was a fantastic race to row in, and I hope those watching from the banks enjoyed it too. I’d also like to thank Aberdeen Asset Management for their continued support – without their backing the Aberdeen Boat Race couldn’t happen.”

“Congratulations to all of the University of Aberdeen crew on their win today. It was a hard race with both crews on form beforehand, so it would have been hard to call before we set off. Even though we didn’t win this year, I’m still very proud of all the effort the crew has put in over the last few months, and it doesn’t take away from our five-year streak. We’ll be back next year!

“The whole day has been brilliant both for the rowers and spectators on the shore – from the alumni and second crew races right up until the title race – and I’d like to thank Aberdeen Asset Management for their amazing continued support of this historic event.”

“On behalf of all at Aberdeen Asset Management, I would like to congratulate the winning crew from the University of Aberdeen. I would also like to recognise the effort of the Robert Gordon University Boat Club rowers, who put in a sterling effort on the water. Both teams should be rightfully proud of their achievements today.

“The university experience is about more than classroom learning, and the boat clubs are a real testament to that. Being founded in Aberdeen, we are very proud to continue to support the Aberdeen Boat Race in what is our 17th year.”